Is Hazard Pay Necessary for the Protection of Essential Workers?

Among those who are in need, essential workers are at the forefront of the fight in combating this illness and returning to normalcy

Anushri Dwivedi
and
December 28, 2020
in
Wealth Inequality
Courtesy of Fortune 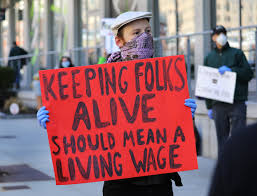 COVID-19, an illness that has plagued and controlled the lives of everyday Americans. Among those who are in need, essential workers are at the forefront of the fight in combating this illness and returning to normalcy. This begs the question: if essential workers take care of American society, who takes care of them? Are they given enough compensation for their endless bravery and perseverance to create a safer and healthier environment? The proposal of hazard pay suggests additional pay that would be given to essential workers for performing hazardous duties or the involvement in work with physical hardship. This compensation was previously associated with jobs in the military, construction, or mining industries but now even bus drivers, warehouse jobs, and those working in supermarkets are putting their lives at risk. They need to be appreciated and given aid in return for their sacrifices in difficult times as we are experiencing in the present.

The active debate of hazard pay has seen both significant opposition and support. Beginning in April, a report called on Congress to pass a hazard pay that would be federally mandated. Thus, the House of Representatives passed legislation that created a $200 billion hazard pay fund while dozens of large companies were able to offer small, temporary, hourly pay bumps to frontline workers eligible to receive this pay. However, the situation in October presented that few frontline essential workers continued to receive any hazard pay in addition to fact that most large retail employers ended temporary pay bumps months ago. Debate arose again on the necessity of hazard pay. From an outside point of view, yes, absolutely hazard pay is still needed. COVID-19 remains an imminent threat to date and those who work to combat it and sacrifice their safety should be appreciated and compensated for their efforts. However, strong resistance has been found in the Republican-controlled Senate, therefore leading House Democrats to drop a proposal from revised legislation in September to further agreement towards hazard pay.

The introduction of hazard pay has quite clearly created polarization amongst the federal government but it can only be furthered by addressing the root of the issue: deeply rooted policy failures and structural problems. This stems from inequities such as minimum wage, systemic racism, and erosion of worker power that are all present in the absence of hazard pay. hazard pay would be a stop gap measure, ensuring frontline workers earn a living wage to combat extreme burdens. Not only does hazard pay have the potential to diminish underlying issues in American society, but it also has numerous benefits. As of date, more than 3/4 of Americans surveyed support providing it or another form of additional compensation. Additionally, workers themselves believe that for their hard work and high risk positions, they deserve hourly wage increases and predictable pay increases in each paycheck similar to overtime or holiday hours instead of occasional bonuses. It is an immediate solution in correcting financial injustice and should be in major consideration as more frontline workers put their lives at risk.

The discussion of hazard pay doesn’t only pertain to appreciation of those sacrificing their health during the pandemic, but it also points to the larger problem of minimum wage.  In the past ten years, the US has been at a $7.25 per hour rate, which is so low that it would put workers earning it below the poverty line. Additionally, hazard pay addresses racial equity: Black and Latino citizens are the majority of the essential workforce and if hazard pay would be targeted towards them, it would overwhelmingly benefit workers of color that are all too often excluded from work that pays decently.

Finally in April, Democrats in Congress proposed hazard pay legislation to provide compensation for essential workers panning across both public and private sectors. This would be a $200 billion “Heroes Fund” and it was part of the original $3 trillion “HEROES Act.” With this fund, eligible workers would receive up to $25,000 in pay called “pandemic premium pay.” But who would be eligible for these compensations? Well, under the “HEROES Act”, eligibility was expansive, meaning that highly paid essential workers would also be compensated for their work. The specific criteria stated as follows: “Essential workers earning up to $200,000 a year would be eligible for full amount of up to $25,000 and workers earning over $200,000 would be eligible for a smaller amount of $5,000”. In May, Republicans proposed a narrower “Patriot Pay” proposal that would include a temporary bonus of up to $12 an hour but compared to the Democrats’ proposal, it included a lower income cap (annual incomes up to $50,000 receive full amount and incomes up to $90,000 receive smaller amount), a shorter timeline (May to end of July), and only a portion of the money would come from the government themselves. In terms of aiding greater groups of people, the Democrats’ proposal seems practical but in terms of the economic state that America and national employers are in, the Republicans’ proposal seems more practical. Whichever side may be favorable, decisions need to be made for immediate implementation.

In the meantime, given the federal government’s polarization on the issue, some state governments have previously taken steps to help their essential workers. Pennsylvania’s model is the COVID-19 Pennsylvania Hazard Pay Grant Program. Its funds provided more than 40,000 frontline workers with the equivalent of a 10-week, $3 per hour raise. This program prioritized workers being lowest-paid, those facing highest COVID-19 risks, and who had the least opportunity for other federal support. Seen through the exceptional success of Pennsylvania, other states can move to take initiative and protect their essential workers until a national consensus is made.

The public and private sectors of the economy can recommend that Congress should focus its money on modest hazard pay for the low-wage workers who need it most, profitable companies can reinstate hazard pay and permanently raise wages to $15 an hour, and workers can fight for policy changes that will address major issues stemming from this problem. Although this is a federal issue that pertains to a majority of the population in America, we cannot directly influence these funds or compensation for passage. However, we can certainly pressure our political representative to see the benefits of these programs to help our fellow citizens who risk everything to protect people like us.