On Wednesday, September 9th, I had the incredible opportunity to interview Professor Omid Safi. Dr. Omid Safi is a Professor of Asian and Middle Eastern Studies at Duke University. 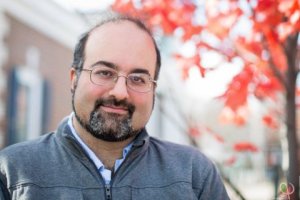 On Wednesday, September 9th, I had the incredible opportunity to interview Professor Omid Safi. Dr. Omid Safi is a Professor of Asian and Middle Eastern Studies at Duke University. He is also the Director of the Duke Islamic Studies Center, and a columnist for On Being. Dr. Safi has an incredible academic, social justice, and forward-thinking background. He has been instrumental in the progressive Muslim movement, and many consider him to be the leader of it. Dr. Safi has consistently been an advocate against anti-Muslim bigotry, all forms of discrimination, and really all injustices. He has amassed large audiences on social media platforms through using his voice to educate, to engage, and to love. You can learn more about Professor Omid Safi here: https://www.facebook.com/ostadjaan/.

I’ve actually had the chance to talk to Dr. Safi in person at his home in North Carolina, and I left refreshed by his genuine passion for using his intelligence for positivity. His humility, integrity, and spirituality are tangible, and I feel blessed to have had the chance to have met such a profoundly good human being. It is easy to become disheartened amidst the anti-Muslim climate of the United States these days as an American-Muslim youth, but it helps so much to have role models like Dr. Safi in order to help navigate my identity. I can’t tell you how often I have been at a loss for words about a tragedy, incident of discrimination, or presidential candidate’s statement, and I have opened my computer screen to see Dr. Safi perfectly articulating how I felt with such eloquence. This world is better because of Dr. Safi, and it was my distinct honor to interview him. It is impossible to read his words without being utterly moved for the better, so I encourage you all to take the time to not only read these words below, but take the time to understand them, reflect upon them, and share them.

I also do want to share a few key takeaways that I have begun to implement in my life since our conversation in September:

The interview can be found below (edited):

1. What inspired you to be involved in justice work, and look at the world from such a loving lens? How do you explain to people the importance of social justice, intersectionality, and acceptance?

I don’t think that I ever consciously sat down and decided to get involved in social justice. The life that I have lived, I have been blessed to live, is one where the observation of human suffering was all around me. The question was, are you going to get involved? Were you going to make the decision to care about other people’s well beings? Or are you gonna just play it safe?

I was born in this country, but I grew up in Iran during the Islamic Revolution. I saw so many atrocities. In the United States, however, I used to pray in an inner-city, African-American mosque, and it was in that neighborhood where I saw a very poor, crime and drug-ridden inner city area that I saw the suffering here as well. I was also reading Malcolm X at that time, and that too affected me profoundly. The genocide in Bosnia also shook me up immensely. Those were some of the seeds of my social and political awakening.

It intensified from news about the sanctions on Iran, Palestine and Israel, Afghanistan, Kashmir, Palestine and Israel again, and etc. A lot of my social and political awakening had to do with international issues, but as time has gone on I’ve seen how interconnected all of these issues are. Over there is also over here.

The richest nation in the world [The United States of America] has 20% of children in poverty and 40% of our children of color live in poverty. We have the money, but we are using it for a military machine, and that has direct consequences for suffering all over the world.

2. As the Director of the Duke Islamic Studies Center and as a prominent Islamic studies scholar, do you think that today’s students are more tolerant of Islam?

I intend to look at the university as something that isn’t cut off from a wider society, so when I think about knowledge, I don’t think that we have to make it relevant. Genuine knowledge is already socially engaged. It is only when we box knowledge into narrow and irrelevant boxes that we then have to try to engage people.

There is no question that society as a whole is so deeply profoundly prejudiced against Muslims, but we don’t have a monopoly on it. Everything people think about Muslims, they also think about African-American people, Hispanic people, LGBT people, etc. I think that one of the best things I can do is not to say “don’t talk bad about Muslims,” but instead to make the argument that we cannot be free until everybody is free.

I have tried to connect the welfare of my own community to the greater community. When Trayvon, Ferguson, etc. happens, I need to speak out against racism not because of fear, but because I am an ally. It is important to me that we, as Muslims, have the African-American community’s back in full on solidarity. Police Brutality is deeply connected to America’s militarism. LAPD, NYPD, Ferguson PD, have all been sent to Israel for “counter terrorism” training paid with funding from American Jewish organizations. Tactics used against Palestinians are now being used against black/brown bodies here. Over there is over here.

3. As a leader in the progressive Muslim movement, what obstacles have you had to face in trying to inspire social justice activism within the Muslim community?

There are a lot of obstacles that I see. It is easy to think of the obstacles as something external. People are happy to hear me talk about the dangers of Wahhabism, extremism, and etc. If I start talking about Guantanamo Bay, and other concepts those same people want me quiet. Some critiques are accepted, but our biggest obstacle is we self censor. The Muslim community is LOADED with talent, particularly amongst the young people. We at times though censor ourselves, and in doing so we restrict the range that we allow ourselves to dream. The biggest thing that I want Muslims to do — is be free.

I went sometime ago to one of Dr. Cornel West’s talks, and I heard him talk about racism, sexism, and etc. I heard him at some point saying “I am a free Jesus-loving black man.” It occurred to me that so rarely have I ever heard a Muslim talk in that way — to socially critique in that way while wearing their faith on their sleeve — yet still remaining inviting. I want to see more people like that — comfortable preaching to an insider community, but we need to push beyond that.

4. How do your respond to people who do not believe Islam and the West are compatible?

One of the first things that I do is periodically I have think about how I want to talk and live. There are times that I write a whole a long essay about dismantling this stereotype, but sometimes I am I’m not even sure it’s worth it to hash it out. Our answers are only as profound as the questions that we entertain, and people need to recognize the history that exists.

5. What steps does the American-Muslim community need to take to become a more inclusive community that has progressive attributes?

There are so many areas that we have to grow into. When I walk into a Muslim space, I look at the ethnic diversity, the women’s space and women’s leadership, the diversity of Islamic interpretations and practices, and I think about if the conservative Islamic agenda is winning. We need communities that look like what we actually look like.

6. What steps does the greater American community need to take to be more educated about the reality of Islam?

It is about education - the most basic facts about Muslims most Americans don’t know. Giving a Qur’an to everybody is not gonna change the game. Human-to-human encounters change the game. If people know a Muslim personally that changes their opinion about Islam.

7. How do you think the stereotype of what entails a Muslim has shaped the Muslim world?

Part of what I notice is that I was very interested when I was younger to prove to other people that I was Muslim enough to meet other people’s criteria. As I’ve gotten older, I’m much less interested in anybody else’s criteria. It is now much more about my own connection to God — my spirituality — and the impact that I have in my community. I don’t care what those people on twitter say. When I was younger I cared about who had more followers, and now I just look at it like: life is too short. I just want to do some good if it’s one person, if it’s 10, if it’s a million.

8. How do you think we can best bring about gender equality in the Muslim World/American-Muslim community?

It was a concern for me in the beginning that the condition of Muslim women was bringing down the reputation of Islam, but now it is much more important to me what the experience for my mother, my sister, and my daughter is like when they walk into a mosque. It’s not because they are related to me, but because they are full, complete, and whole human beings on their own. I cannot be fully human until and unless they are guaranteed all of their rights. They all have so many talents in every realm, so why they shouldn’t they shine in religious leadership?

9. You talked a lot about confronting reality to achieve a pluralistic community working towards justice, and I was wondering what advice you could offer us to get there?