Impeachment Inquiries Do Not Equal Lynching

Trump has declared the inquiry into his impeachment "a lynching." 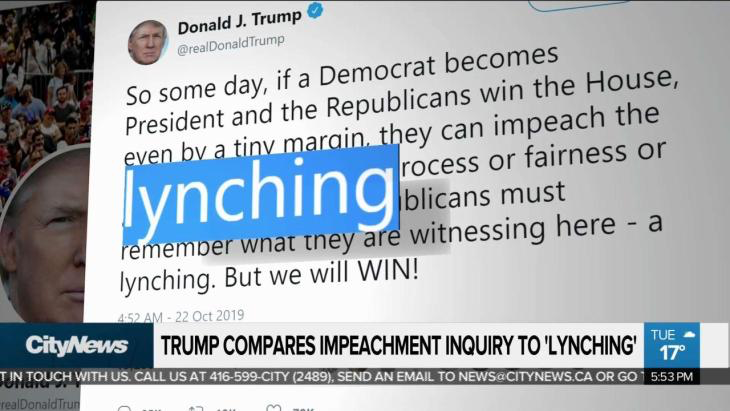 Donald Trump has a history of racist, sexist, transphobic and homophobic declarations via Twitter and, most lately, he has made a mockery of the immense violence against black people during the Civil Rights movement. He has declared the inquiry into his impeachment as the greatest witch hunt in American history, a terrible precedent for other presidents, and the worst by far: a lynching.

“All Republicans must remember what they are witnessing here–– a lynching,” he fiercely proclaimed in another one of his early morning Twitter sessions. The privilege Trump holds becomes violently evident as he compares a democratic process to the thousands of men, women, and children whose bodies were carved, burned, and bludgeoned while mobs of white folk watched and laughed at their pain. Lynchings are a dark, devastating part of American history that Trump consciously fails to be aware of.

In the late 19th century after the Civil War, lynching began to surge as southerners faced the loss of the confederacy. This practice of brutally murdering someone by extrajudicial action is typically associated with mobs and the Klu Klux Klan, and primarily weaponized against black people in America. According to “Lynchings in America,” a 2017 report by the Equal Justice Initiative, over 4,000 African-Americans were lynched in the roughly 70 year span between 1877 and 1950. The violent legacy that lynchings left on America is still very prevalent, and is most vivid throughout many of the southern states. Hate crimes against African-Americans are still occurring throughout the county, and 2016 FBI statistics have shown that the most tend to manifest in the South. Their legacy is not gone, and it certainly is not a laughing matter.

Lynchings are, and should remain, a serious topic, not something to compare to a constitutionally-promised process that sustains democracy. Trump’s attempt at his own victimization is a narcissistic plea that preys upon the communities, people, and families that have experienced the nation’s ugly commitment to racism. As Trump begs for sympathy, he blatantly disregards the devastating acts of terrorism and denigration that many in America faced during the Reconstruction era.

Trivializing such an inconsolable time in American history as something people can relate to in times of their unease is outrageous and demeaning. Desensitizing people to vicious and violent acts such as lynchings is dangerous. Understanding the significance that deep racial divides held in this country is increasingly crucial, especially in today’s polarized political climate. The focus of our conversations should be reflection and progress rather than victimizing ourselves when privilege and power don’t get us to the places we want to be in.

Creating a culture of victimization is deeply harmful to our society and Trump being the main headliner of this victimization increases white nationalist sentiment. After 28 people were injured and one, Heather Heyer, was killed by a white nationalist in Charlottesville in 2017, Trump called the white nationalists “very fine people.” Hate crimes only increase as we continue to promote the victimization of powerful people. There is no excuse. A comparison of impeachment to the brutal practice of lynching is not only incredibly insensitive, but promotes further harm in the future.

What to Know for Human Trafficking Awareness Month