The TEAACH Act will go into effect in the incoming year of 2022.

Aairah Koujalgi
and
September 12, 2021
in
Representation
Courtesy of NBC News 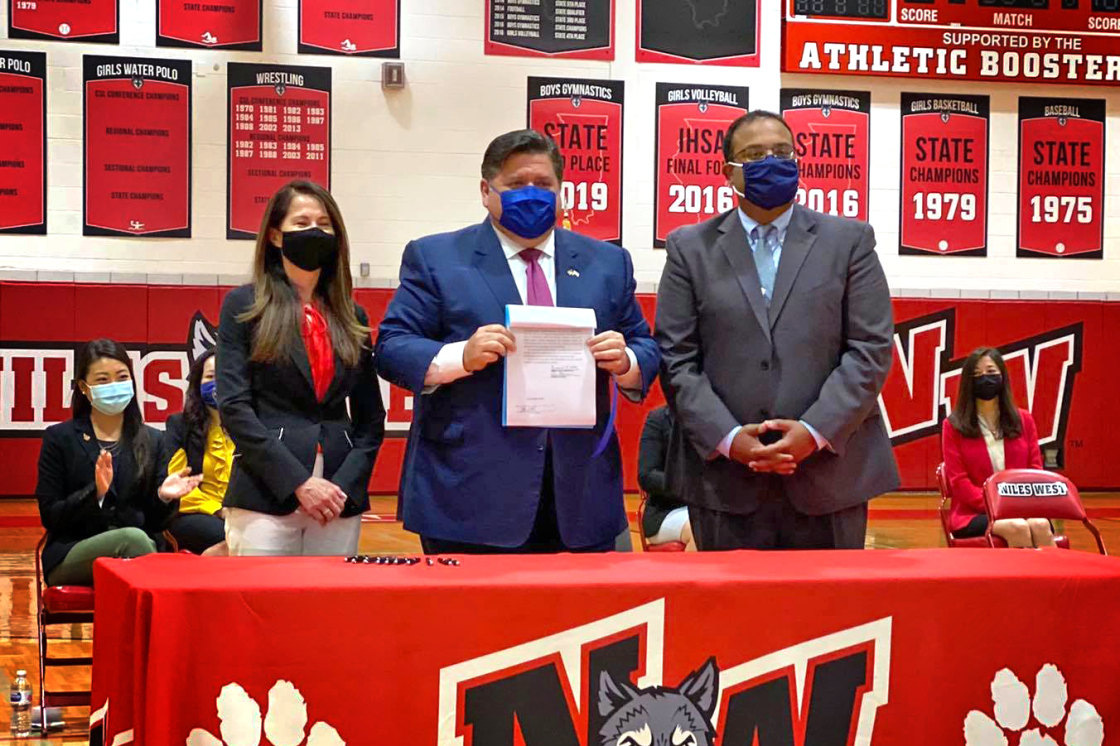 Asian Americans and their stories are often disregarded and invisible in America, hiding behind the shadows of stories of white men and women who are regarded as more important. While children in schools grow up learning about Christopher Columbus and his expedition to America, the Chinese Exclusion Acts and internment of Japanese Americans remain unknown to many.

Recently, Governor Pritzker from the state of Illinois issued the TEAACH Act: Teaching Equitable Asian American Community History Act. Proposed by Sen. Ram Villivalam and state representative Jennifer Gong-Gershowitz, the act aims to identify Asian Americans as a part of American History to educate students on the complete story; not just a fragmented piece of it that doesn’t highlight POC contributions. The TEAACH Act will go into effect in the incoming year of 2022. A vigorous campaign to issue the act was led in part by social justice group, Asian Americans Advancing Justice|Chicago, along with over 20 other Illinois organizations.

Gong-Gershowitz spoke out about the act as an Asian American herself, and explained how she herself graduated from Illinois public schools but “knew nothing about Asian American history.” Her hope is that this bill will build empathy among students and help them benefit from a curriculum featuring all voices and diverse perspectives.

Other professionals also believe that with the TEAACH bill, Asian-American students can feel seen and included. Seeing themselves in the curriculum could potentially help children become more at peace with their identity and feel empowered.

At this time, the act does not detail what curriculum Illinois public schools would be using and teaching in classrooms, but does reference a 5-part PBS series on Asian-American history as a helpful resource. When asked what stories she wanted the curriculum to include, Gong-Gershowitz’ response included sharing the depth of experiences Asian-Americans bring to American history and times that Asian-Americans have “stepped up to be a part of the conversation around race and civil rights.”

Many of these crimes are committed by perpetrators who only know the harmful racial stereotypes applying to Asian-Americans that are displayed in the media. Policy director of Asian-Americans Advancing Justice|Chicago, Justin Valas, expressed that there is great action needed to combat xenophobia and to assist in helping“students understand the role that our communities have played in the United States and the broad spectrum of who Asian-Americans are, have been, and could be.” The group is currently working with the state government in an attempt to offer guidance to school districts and teachers who may not know what direction to take.

Apart from the TEEACH Act, Illinois has also taken other initiatives to make public school curriculum more inclusive, including approving a new law which now requires history lessons to teach the contributions of LGBTQ+ individuals. Other states have also started jumping on the bandwagon, with Oregon and California adopting ethnic studies curricula that have lessons on Pacific Islander and Asian-American history.

With the TEEACH act also comes an entirely new territory -- the question of whether schools will decide to take the curriculum seriously and the impact this addition would have on students. While the outcome is not set in stone, Illinois has set a precedent that hopefully more states will go on to follow.