Anushri Dwivedi
and
June 9, 2021
in
LGTBQ+
Courtesy of Supermajority 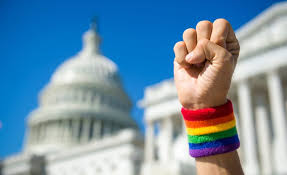 Friday, April 23, 2021, marked this year’s official GLSEN Day of Silence. You might be wondering, what exactly does that mean? For those who don’t know, it is a campaign seeking to show the realities of what the LGBTQ community’s youth experience daily. It was created in 1996 and was initially deliberated to focus on the problem in school systems but has since expanded to workplaces, universities and sporting events.

As for a general overview of the history of this memorable event, it was created by a student at the University of Virginia, named Maria Pulzetti. She felt “LGBTQ youth were always silenced and ignored by parents and administrators & that their concerns and complaints were always disregarded." Then in 1997, one year after the day’s opening, it hit national media and led to over 100 institutions’ participation. Additionally in 2000, the GLSEN (Gay, Lesbian and Straight Education Network) who was and still is one of the largest LGBTQ education networks in the US, adopted the Day of Silence as one of their official projects. Finally, today, over 10,000 institutions registered as participants in the Day of Silence including all 50 US states, Singapore and New Zealand. It is inspiring to see how this event has grown over the past 24 years!

For a brief timeline of the event’s most important years, let’s take a look. In 1996, as you know, this event was created. In 2000, the GLSEN adopted it. And in 2008, over 8,000 students took the vow of silence! Finally, also in 2008, the Day of Silence for that year was commemorated for Larry King, a 15 year old boy who was shot by a classmate over his sexual identity. Larry’s story had an incredibly tragic ending but by participating in the Day of Silence, we hope to share his story and prevent others like his from occurring. This day is meant to foster an accepting and safe environment and we hope it continues to do so.

Now you may know what this event is but may not know how to participate. Generally how it works is that you 1) sign up with registration forms that our school’s GSA creates for the event, 2) you receive a badge on a lanyard to wear on the day of the event and 3) at the end of the day, all those who participated go to our auditorium to have a rally or speaking event, allowing all participants to break their silence in unison. Students participate nationally with many choosing to wear rainbow colors symbolizing the LGBTQ+ community or even wearing tape over their mouths or Xs on their hands to create a bigger impact.

While the normal celebration or commemoration of this day is always super powerful and impactful for many, this year, due to COVID-19, the day did not go quite as I had explained above. With students both virtual and in-person, the day’s customs had to be adapted to fit all students participating but it was ultimately very successful.

This year, the sign up process was the same as usual although participation traditions varied. For in-person students, the event proceeded as normal except that the end of day rally to break silence would be virtual. Whereas for virtual students, instead of wearing a badge signifying their participation, they were able to change their zoom profile picture and/or zoom background to indicate their participation.  All students, especially those at home, despite not having a normal celebration, were encouraged to make stickers, buttons and other such items to spread awareness and made the day more impactful.

It’s amazing to see how the initiative of one student who saw an issue, decided to act on it and that resulted in a national event and movement centering around accepting our differences, living like LGBTQ youth for a day and hopefully as a result, becoming their allies and taking further action to make them feel as safe as we do at school and universities.

I personally learned about the Day of Silence and began participating in middle school. I feel that this event has really opened my eyes to the harsh reality of being part of the LGBTQ community and that their hardships and feelings are often ignored. However, I hope as more people join in this event and continue to accept LGBTQ people for who they are, their hardships and struggles can be addressed and heard.

Now, the Day of Silence isn’t the only one day of the year where you can support your fellow LGBTQ peers, if you are looking to create more of an impact after this day’s completion. You can fill out the National School Climate Survey that “captures the experiences of LGBTQ+ students in K-12 schools. Your story helps draft affirming bills for LGBTQ+ students and has helped change policies at schools.” Finally, you can continue to organize! Begin by brainstorming what is needed to get to the ultimate safe and liberated school environment, accepting of all, and start building.

For more about the Day of Silence and how you can support the LGBTQ+ community as an ally, please visit: https://www.glsen.org/.

I hope this encouraged you to educate yourself, educate others and take action!