How to Not Look Like a Clown This Halloween

Halloween is such a huge part of our culture that it really should come as no surprise that every year the holiday is polluted by gross displays of racism and misogyny.

Morgan Weir
and
December 23, 2019
in
Representation
Courtesy of The New York Times 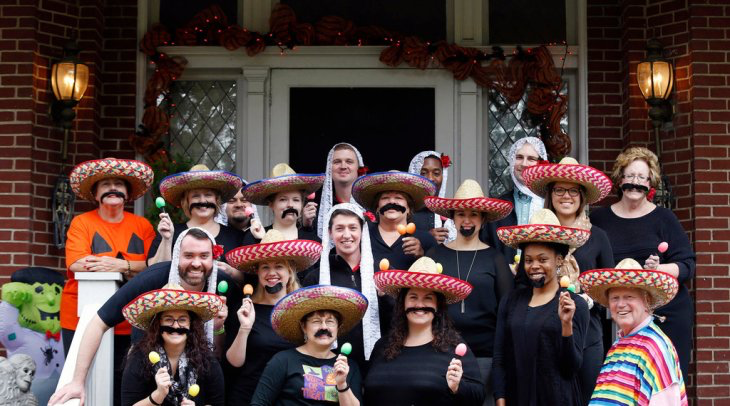 Halloween is one of the biggest holidays in America. Every year, hoards of children dress up to go trick or treating, hoping to fill their baskets to the brim with candy and treats. Adults come up with costume ideas to impress at parties and on social media. It’s such a huge part of our culture that it really should come as no surprise that every year the holiday is polluted by gross displays of racism and misogyny (which are also huge parts of our society). With Halloween just a few days away, here are some general rules for what not to wear. However, it should be noted that one person can’t be the gatekeeper for what is or isn’t acceptable during Halloween; it’s just about using common sense.

At the center of this conversation is a debate over what really constitutes crossing the line when it comes to cultural appropriation in Halloween costumes. As a baseline, cultural appropriation is taking things from a culture that aren’t your own, especially when you don’t understand or respect the traditions of that culture. The difference between lighthearted appreciation and destructive appropriation is the legacy of oppression and the power dynamic between the affected group and their appropriator. With that in mind, understand that dressing up as anyone of another culture relies on dangerous tropes which can cause real, tangible harm to these groups, even if you can’t personally see it.

For example, wearing (often sexualized) Native American cultural pieces like headdresses has become popular. Many of the people who sexualize and profit from these “costumes” aren’t aware that native women facethe highest rates of sexual assault and a murder rate that is 10 times higher than the national average. The popular “sugar skull” costumes are another example. Day of the dead, or Día de Los Muertos, is a very culturally important holiday in Mexico to honor one's ancestors in a respectful way with prayer and reflection; not an opportunity for you to cash in on sexualized aesthetics or benefit from a culture that you don’t belong to.

Dressing up as a race or ethnicity for Halloween is cheap comedy and reduces entire groups of people to stereotypes.  For example, the ‘Mexican’ costume has become popular, with people wearing ponchos, sombreros, and mustaches. Not only does this further violent tropes about Mexican culture, but it is complete erasure of the fact that hundreds and thousands of people from Latin America have been targeted by the US government and by hate crimes in the midst of crises in Central America.

Another popular yet controversial Halloween trend has been non-black people wearing blackface. This completely dismisses the violent oppression that black people in the US have to deal with and it is a symptom of systemic racism. The brutal history of blackfacestarts with minstrel shows in the 1800’s where white people put on blackface for dehumanizing and degrading performances which were the most popular form of entertainment in the 1800’s. They contributed directly to modern and historical caricatures of black people and the continued use of blackface shows that the legacy of the performances still holds massive weight in our culture.

This also applies to making light of anyone’s individual struggles. Many people dress up as a homeless person thinking it’s an easy last minute costume, but they fail to see how insensitive that choice is to the 533,000 people, according to the US Department of Housing and Urban Development, who are homeless thanks to a public housing crisis and systemic discrimation.

Similarly offensive would be dressing as an escaped insane asylum patient or something of the like. Again, this idea is incredibly insensitive to the 10 million adults in the US who deal with serious mental illness according to the National Alliance on Mental Illness. The trope of a scary, dangerous, “crazy” mentally ill person is incredibly harmful and disgusting, not to mention wildly misinformed considering that the mentally ill are 10 times more likely to be victims of crime than perpetrators of it according to the US Department of Health and Human Services. Only 3-5% of violent crimes are committed by people with serious mental illness. The typical Hollywood stereotype of “insane” people actively contributes to the stigma around mental illness which keeps people from getting treatment; only 44% of adults and not even 20% of children and teens get the treatment they need.

Body image is scrutinized year round, and it doesn’t slow down around Halloween. The constant criticism of women’s fashion is extended to their costume choices. With few stores offering plus size costume choices or acknowledging the existence of any body other than straight-sized ones, it’s easy to see how entrenched body-shaming and fatphobia are in our culture during Halloween, especially with the trend of fat suits. Fat suits send a clear message that you think fatness is something to be mocked. They’re lazy and unoriginal excuses for comedy that dehumanize fat people and exploit their lived experiences for a punchline.

Along with body shaming, objectification is rampant during Halloween. So much of what is marketed to women is based on the idea that sex sells and sexualizing women’s costumes is an easy way to capitalize off the holiday. The problem isn’t that women choose to wear these outfits. That again perpetuates the objectification of women, the idea that their choice of what to wear is an indicator of their morality, and the idea that women’s bodies are inherently sexual. It has nothing to do with morals or character, it’s about control—society has a problem with letting women make their own choices and pick their own clothes.

However, this doesn’t make it ok to wear something overtly sexual and suggestive about harassment. There’s nothing wrong with an adult wanting to wear a costume that some may perceive as provocative, but there is a line and if you’re making light of sexual assault or making people feel uncomfortable, you’ve crossed it.

This is not just a matter of being politically correct or offending people, but of realizing the message these types of costumes send and their very real consequences. There are plenty of funny, creative ideas for costumes that don’t reinforce harmful narratives, blatant ignorance, and dangerous power structures in the US. Save yourself from looking like a clown this Halloween season and exercise basic human decency when picking your costume.