While many of us are able to communicate with loved ones, we often forget that there are millions of incarcerated who are incapable of contacting their families without spiraling into debt.

Atharv Bhavanasi
and
May 1, 2022
in
Justice
Courtesy of Equal Justice and Law 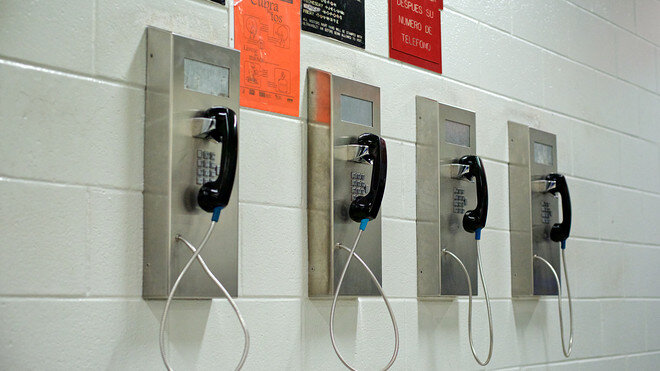 When Myishea White went to call her incarcerated husband’s correctional facility in Florida—a daily routine Myishea White and her daughter had kept for three years—she found that the costs for phone calls suddenly skyrocketed; White had gone from paying 4 cents per minute to 13.5 cents per minute with an added 99 cents every time she needed to add money to her account. In total, each time White and her daughter want to talk to her husband, she pays around $5 and her account can only hold $50 resulting in frequent extra payments. The drastic increases in prices for phone calls forces White to try to “cram everything in a single phone call”. According to Business Insider, White added, “It's just hard because I don't want to not talk to him…when I hear his voice, I hear his calm. I know it's OK. It's not easy when you don't see the person you want to see on a daily basis.”

Myishea White is not alone. Nationwide sweeping changes have occurred in jails, prisons, and correctional facilities where private companies purposely drive the price to garner the most profit.

It can be said that White’s situation is at the lighter end of the stick; the Washington Post reports that on average it costs $5.74 for just a 15 minute phone call, while some prisons charge up to a dollar or more per minute - without counting hidden fees that increase costs by up to 40%. Each year, Americans pay $1 billion to call family members in prison. The Ella Baker Center—a human rights organization—reported that more than a third of families go into debt for phone calls and other visits. However, the most impacted victims are people of color and women who bear the brunt of this financial responsibility. Cambridge University reports that “44% of Black women (and 32% of Black men) but only 12% of White women (and 6% of White men) have a family member imprisoned.” In about 63% of cases, family members are given a burden for paying the cost of phone calls, and from that number, 83% of those are women. In fact, one in four black women are related to someone who is imprisoned. Companies charging exorbitant fees for phone calls are extracting wealth from Black and Brown communities who are already disproportionately poorer than their white counterparts.

The real root of the problem lay with correctional facilities choosing the company that will bring them the most amount of profit shared from phone calls. Telecom companies reveal on their contract proposals the amount of money a facility will gain, leading to prisons choosing the most profitable option—a heavy cost to the families of the incarcerated. In competition, private companies will drive phone call prices higher and higher to get chosen as a contract. To make things worse, the Prison Policy Initiative expressed that telecommunications companies such as Securus or GTL combined control “74% and 83%” of the prison-telecommunications industry, a near monopoly for the line of business.

Thus, demands for making phone calls free are gaining traction as the high costs deter inmates and their families from communicating with one another driving prisoners into further seclusion. Isolation and loneliness only serves to exacerbate a prisoner’s mental health and as stated by Equal Justice Under Law, research shows that those suffering from mental illnesses have a “higher chance of returning to incarceration”. In essence, the steep prices of phone calls contribute to rising incarceration rates while also hindering a prisoner’s health both physically and mentally.

Rather than continuing down this oppressive road, we should look to states such as Illinois who’ve lowered their prison call rates to less than a penny per minute. We should support legislation such as the bipartisan bill introduced by Sen. Tammy Duckworth to ensure “just and reasonable charges.” Spreading the word and further educating ourselves about this issue are simply yet effective steps that help the cause. Countrywide, prisoners are being barred and secluded from their loved ones; committing a crime should not deprive someone of their humanity. Enacting more reforms in the judicial system is a step in the right direction and one more victory against systemic racism.