As the first man to appear alone on the Vogue cover in a dress, Harry Styles is certainly not afraid of pushing the boundaries of what is considered socially acceptable for a man in today’s society

Tanishka Shah
and
December 23, 2020
in
Representation
Courtesy of The Harvard Crimson 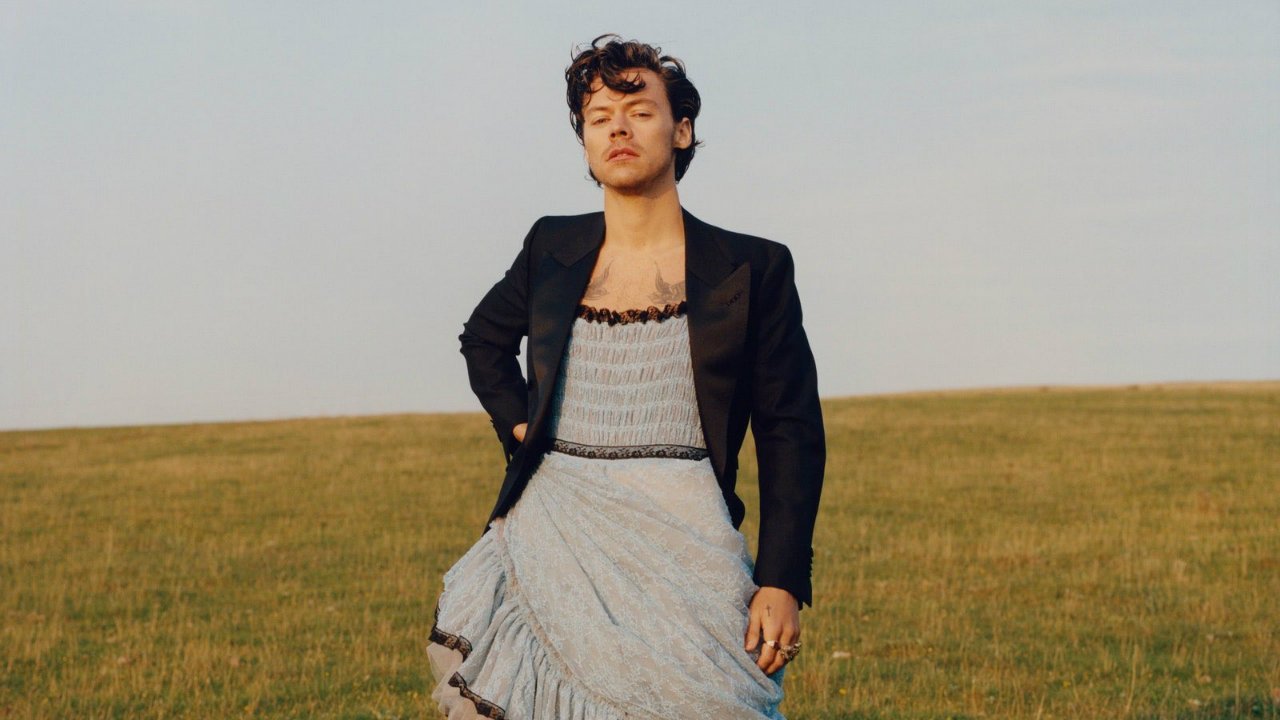 From his iconic fashion style to his goose-bump inducing vocals, Harry Styles has won over the hearts of millions across the globe. He is undoubtedly a one-of-a-kind artist in terms of his music as well as his fashion. The way he embraces what’s supposedly feminine while shattering the gender norms is what uniquely sets him apart from his male pop star peers. His actions blur the “fine line” between male and female, gay and straight, and masculine and feminine. As he delves deeper into the world of unconventional clothing, his sheer shirts, bejeweled fingers, and statement suits are more than just rebranding; they are part of a larger dissent of toxic masculinity.

Styles is not afraid of pushing the boundaries of what is considered socially acceptable for a man in today’s society. While award-show red carpets used to be a cycle of the monotonous black tux, it is a breath of fresh air to see Styles - especially as a high-profile and influential star - stand confidently in glittery heeled boots, dangly earrings, and nail polish simply because he wishes to. Men who are able to embrace their feelings and accept that they enjoy less stereotypically masculine things without shame hold the power to free themselves from the entrapping bars of toxic masculinity.

Recently, Styles made headlines as the first man to appear alone on the cover of Vogue, styling in a glamorous dress. He received widespread praise for both his aesthetic sensibilities and willingness to break through outdated gender norms. However, Candace Owens, an American conservative political commentator, apparently had a problem with all this and stated on Twitter, “There is no society that can survive without strong men. It is an outright attack. Bring back manly men,” she said. Owens’ argument relies on a very unbending definition of what it means to be a “strong man,” one that’s rooted in toxic masculinity. However, seeing as how powerful men have, in fact, worn dresses, makeup, and long hair for centuries contradicts this very idea. In fact, the act of harshly restricting people of different genders into extremely different forms of outfits is relatively recent.

Toxic masculinity certainly does not mean that men are ill-natured or violent. In fact, before World War I, the societal construct of "pink for girls" and "blue for boys" never existed, and, for children, dresses were considered gender-neutral. This conversation about toxic masculinity was recently introduced by men themselves. It was inspired by a feminist movement that had done much to unpack what might be called “toxic femininity.”

Recently, American Psychological Association (APA) released its first-ever guidelines for psychologists working with boys and men who are socialized to conform to “traditional masculinity ideology” — suggesting that the traditional masculinity ideology can hinder men and boys from exploring what it means to be a man. This harmful concept of masculinity places significant importance on ‘manliness’ based on “strength, lack of emotion, self-sufficiency, dominance, and sexual virility.” According to traditional toxic masculine values, a male who doesn’t display enough of these traits falls short of being a ‘real man.’

Toxic masculinity is a narrow and repressive description of manhood, designating masculinity as the constellation of socially regressive traits defined by violence, sex, status, and aggression. It’s the cultural ideal of manliness, where emotions are a weakness and strength is everything; while supposedly “feminine” traits - ranging from emotional vulnerability to not being hypersexual - are the means by which your identity as a “man” can be taken away.

These traits serve to foster domination, devaluation of women, homophobia, and wanton violence. Toxic masculinity grows from teaching boys that they can’t express emotions openly, that they have to be “tough at all times”, that anything other than that makes them “feminine” or weak.

APA suggests that it’s these cultural lessons that have been linked to “aggression and violence,” leaving boys and men at “disproportionate risk for school discipline, academic challenges and health disparities,” including cardiovascular problems and substance abuse. Men are not naturally violent, but in a culture that equates masculinity with physical power, some men and boys invariably feel like they are failing at “being a man.” For these particular men and boys, toxic masculinity has created a vacuum in their lives which, according to them, can only be filled through violence: through women and of child abuse, through affiliation with the so-called “alt-right” or ISIS, through gun violence or any other promise of restored agency that is wrongly equated with manhood.

Overemphasis of these traits may lead to harmful imbalances in an individual trying to live up to the societal expectations. Aggression, sexual aggression or control, showing no emotion or masking emotions, hyper-competitiveness, need to dominate or control others, tendency towards violence, isolation, low empathy, chauvinism and sexism are some examples of what might be caused due to the unrelenting pressure of toxic masculinity.

Unchecked toxic masculinity and the behaviors that accompany it may lead to a variety of issues, such as bullying, school discipline, academic challenges, jail or prison time, domestic violence, sexual assault, risky behaviors, substance abuse, suicide, psychological trauma and lack of friendships or genuine connections. Some theories indicate that toxic masculinity plays a role in physical health as well. It may prevent some men from seeking out help for possible health issues and other potential problems in the fear of being seen as vulnerable or weak.

In reality, researchers have shown that there is little difference between the brains of men and women. While gender identity is a deeply held feeling of being male, female, or another gender, people of different genders often act differently, not due to their biological traits but because of rigid societal norms created around femininity and masculinity.

A new definition of masculinity is required, something much more humanly and inclusive. What it means to be male might include overall human experiences, such as openly experiencing and expressing a wide range of emotions, interdependence between men and women, vulnerability, cooperation, kindness and softness. This does not indicate abandoning all traditional masculine traits, including traditionally masculine characteristics such strength and adventure, which may help some people define their own masculinity. However, these traits shall not make up a person’s entire definition of masculinity and form only one small aspect of their identity.

Eliminating or changing toxic masculinity is not possible overnight. However, as more people begin to define their own version of masculinity, gender roles will continue to change on a larger scale as they always have. On a personal level, it is necessary for an individual to educate themselves about their attitudes towards masculinity and hold space for others to help change their definitions. Inviting a friend to share their emotions or feelings about the topic, and openly discussing them without judgment or criticism is a good way to move forward.

Each man will have to individually decide how to define manhood and masculinity for themselves. Fashion is an art form that knows no bounds and Styles’ simple yet powerful way of shattering gender norms and defying toxic masculinity is something that shall continue to impact and inspire people for years to come.