Exploring societal issues through reading is essential to students’ learning. So why are parents trying to ban books?

Aairah Koujalgi
and
May 14, 2022
in
Student Rights
Courtesy of Variety 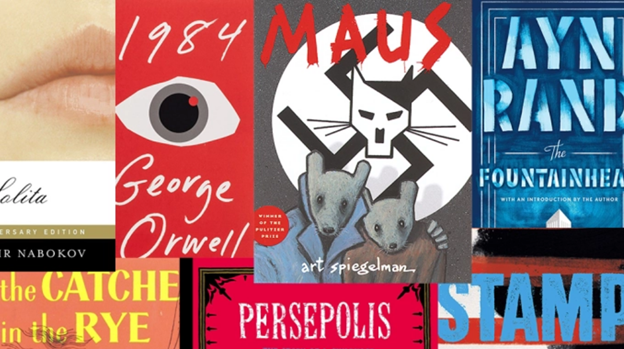 Book bans, which are gaining more and more prominence each year, are known for being displayed in libraries and enforced in schools. While books with foul language and sexual content such as The Catcher in the Rye are famously known for being banned all over schools in America, even books viewed as innocent face disapproval from critics. One example of this is the novel Alice’s Adventures in Wonderland, penned by Lewis Carroll. Upon its publication, the book received acclaim for its plot of a young girl stumbling and finding a magical world. However, the novel was also frowned upon by many, who find that using mushrooms and hookah imagery in the novel showed the drug era of the US. Just this year and the past year, the American Library Association reported that they had received 330 reports of book challenges last fall. The primary reason for this? Many schools claim that the books they have banned are either too vulgar for students, or contain inappropriate material not suitable for their age group.

Congresspeople have also been working to help parents control instructional materials. For example, in Florida, Representative Sam Garrison co-sponsored a bill allowing parents of students to join committees and help select and remove instructional materials in schools. The school districts would also have to mold procedures that would allow school libraries to remove or stop distributing books that went against the curriculum or alignment with Florida’s academic standards established by the Florida State Board of Education, as well as the district’s.

In a floor debate, Garrison spoke out and argued that “What this bill is seeking to do is provide transparency to reinforce for parents the security and the confidence that comes with knowing that they can drop their kids off at the local library and be comfortable. They want to encourage their kids to go to the library.”

However, many critics of the book ban have spoken out about the clear bias schools have towards books that discuss social issues or provide representation for marginalized groups. Chief executive of PEN America (a free-speech organization), Suzanne Nosell, a large advocate against book bans, told the New York Times, “[Looking] at the lists of books being targeted, it’s so broad.”

The groups that targeted these specific books seem to be weaponizing books that contain more obscene material for students, books that are meant to promote diversity within school environments.

One particular book that has gained prominence in 2022 for being banned in schools over America is the graphic novel Maus. The Pulitzer-Prize winning story follows the author interviewing his father about his experiences as a Polish Jew during the Holocaust, receiving wide critical acclaim. However, the McMinn County Board of Education in Tennessee voted unanimously to remove the book from the Holocaust part of its 8th-grade curriculum, particularly due to its “nudity and curse words.”

In response to what many call an outrageous ban, youth-led activism group Voters of Tomorrow are planning to distribute Maus and other books seen as “obscene” to students in Texas and Virginia. The Texas chapter’s leader, Maya Mackey told ABC News, “There are people who would rather not have conversations around these books because they address legacies of racism and fascism that are still alive today… In order to have a truly educated society and democracy, we need to have conversations around books like these."

A popular book that has been banned across many schools in the US is To Kill A Mockingbird, a novel following young child Scott Finch in the 1960s, and the court case of a young black man being accused of rape. Although the novel is widely acclaimed, efforts to ban the book across schools in America have also been prominent. Critics against the book claim that it promotes racist language, as the n-word is used frequently by characters in the novel. Furthermore, the theme of rape and rape allegations in the book are seen as inappropriate and obscene, leading many to advocate for the book to be banned. In my experience, having read the book in eighth grade as part of my reading class, I found the book to be extremely well written, and it depicted the realities of racism back in the time very clearly. Instead of promoting racism, I feel as if the book has relevance to current events occurring even today with black men and women. The struggles of black men in America who get accused of committing crimes they have not committed is still prevalent in today’s society, and an issue that all students should educate themselves on.

Exploring societal issues through books is essential to students’ learning. While material in these books may contain obscene or vulgar content that some may find unsuitable for children, this material can help broaden their eyes and widen their perspectives. Additionally, students have the right to learn more about diversified communities and marginalized groups, and books present an amazing way for them to learn. How do we expect students to learn if book bans prevent them from having the opportunity to do so?