Atharv Bhavanasi
and
March 28, 2020
in
Race
Rep. Bobby Rush, D-Ill., speaks in favor of the Emmett Till Antilynching Act beside a photo of the 14-year-old African American who was lynched in Mississippi in 1955. (Photo/J. Scott Applewhite/NPR) 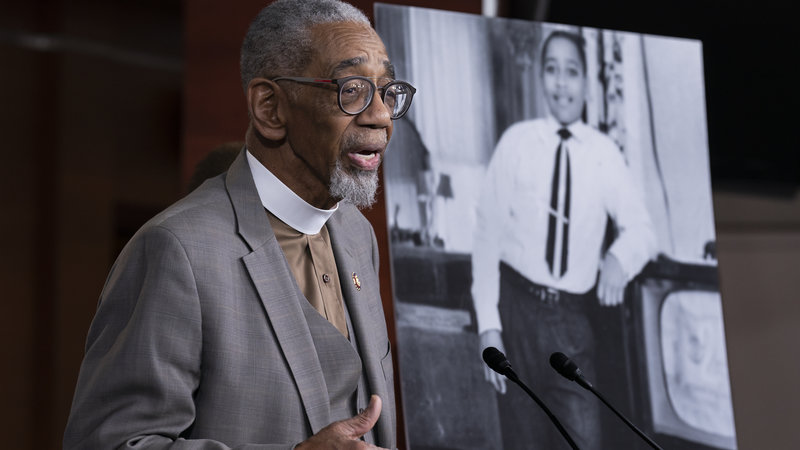 14-year old Emmett Till was brutally murdered by the act of Lynching in Mississippi in 1955. He was accused of flirting with 21-year old Carolyn Bryant, a married white woman. Her husband Roy Bryant and his half-brother J.W. Milam kidnapped Emmett Till, where they beat and mutilated him before shooting him in the head with a gun. Till’s body was discovered in the Tallahatchie River, his body later returned to his mother. His mother revealed what had happened to her son to the world. A trial was held for the killers, but the all-white jury declared the killers not guilty. However, the news of Till’s brutal death sparked the Civil Rights Movement.

On February 26th of 2020 the House of Rep. presented the bill in his name. The NAACP (National Association for the Advancement of Colored People) had reported 4,743 lynchings occuring in the U.S. between 1882-1968. Blacks had accounted for 72.7% of them. The majority of the whites were lynched for helping blacks, being anti-lynching, or domestic crimes. Lynchings of blacks often took place in the South, a huge reason for this was due to the rising tensions between the Southern Whites and the Southern Blacks after the civil war. The highest number of lynchings in any state was in Mississippi—there were 581 lynchings in Mississippi. The last recorded lynching occurred in 1998, killing James Bryd Jr. in Jasper County, Missouri.

2 years ago, the Senate had approved the anti-lynching bill and recently, the House voted on the bill. The bill is called the Emmett Till Antilynching Act.  According to Los Angeles Times, the vote was 410 to 4. Three Republicans voted against the bill: Ted Yoho of Florida, Thomas Massie of Virginia, and Louie Gohmert of Texas. 1 independent, Justin Amash of Michigan voted against the bill. Gohmert said he supported the bill but wanted those accused of lynching in state court where the death penalty is possible. Thomas Massie explained “Adding enhanced penalties for ‘hate’ tends to endanger other liberties such as freedom of speech.” Yet Karen Bass of Los Angeles defended the bill, calling Lynching the “lasting legacy of slavery.” Kamala Harris of California and Cory Booker of New Jersey applauded the bill, which mirrored  the legislation they sponsored in the Senate.  Cory Brooker described lynching, “ a pernicious tool of racialized violence, terror and oppression ”.

While the last lynching happened years ago, the bill serves as a way to fight racism. The Washington Times reported that making Lynching illegal “...sends a strong message denouncing racially motivated violence.”  In the early 1900s Congress tried to pass anti-legislation more than 200 times. The bill Kamala Harris and Cory Booker sponsored but was never taken to the House. Finally, however, we have made Lynching illegal. White Supremacy isn’t as obvious and prominent as it once was 60 years ago when the Ku Klux Klan murdered black people. Yet racism is still present in the United States today. Lynching was a violent, horrifying act targeting  innocent black Americans. The bill approved by the majority of the House of Reps. serves to move the country forward—it acts as a symbol to combat racism across the nation.

Global Warming Hasn’t Stopped. Instead, it's About to Be Worse Than Ever.