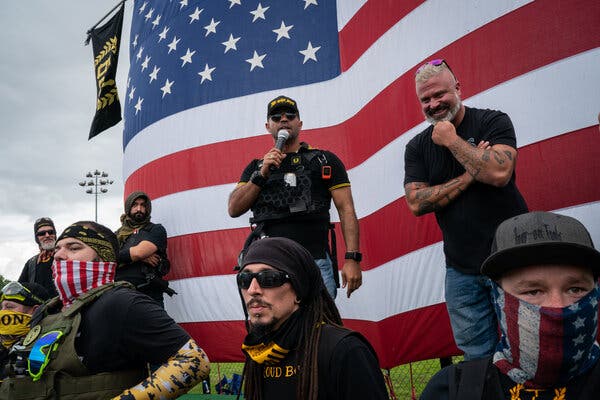 Donald Trump’s refusal to condemn white supremacist groups during the first Presidential debate fits the extremist rhetoric that has already caused threats to minorities and people of color.

Joe Biden told white supremacists to ‘cease and desist’ after Trump told them to ‘stand back and stand by.’

Many experts have already warned that the president encouraging his supporters to commit voter fraud could have consequences, considering that armed, right-wing militias have already brought violence to cities across the country during the recent anti-racism protests.

In a follow-up question, another reporter asked, “White supremacists clearly love you and support you. Do you welcome that?”

One of the president’s current campaign strategies is to appear as the ‘law and order candidate.’ His second statement about denouncing all forms of white supremacy is questionable, considering that he refuses to mention or acknowledge far-right groups. Trump also seemed to change the subject to the loosely organized anti-fascist movement known as Antifa. Regardless of whether or not the president was telling the truth about not knowing who they are, groups like the Proud Boys have been covered in the mainstream media for years.

There are many reasons why Trump’s claim that he has never heard of the Proud Boys is unlikely. In 2018, a report from law enforcement stated that the FBI “categorizes the Proud Boys as an extremist group with ties to White Nationalism.” Though the FBI later said, “Our focus is not on membership in particular groups but on individuals who commit violence and criminal activity that constitutes a federal crime or poses a threat to national security.” The spokesperson added, “The FBI does not and will not police ideology.”

The president would have been briefed on this, as it is his job to know about threats of domestic terrorism. In addition to this, the Proud Boys regularly attend his rallies, and Proud Boy co-chairman Enrique Tarrio was seen sitting behind Trump at a speech in Miami last year. Tarrio told the Washington Post that the Trump administration didn’t know of his presence. The White House did not comment.

Roger Stone, one of Trump’s former advisers, has close ties to the organization. Stone had been hiring members of the Proud Boys to be security guards and repeating their slogans. In 2016, he was also photographed with members of the group flashing the “OK” symbol. This symbol has been re-appropriated as a white power symbol, but it’s unclear if Stone knew the meaning.

Many social media users noted that Trump has a history of denying his awareness of far-right extremists. In 2016, he claimed he knew “nothing” about David Duke, the former grand wizard of the KKK, or white supremacy.

Of course, it can’t be proven that Trump knows who the Proud Boys are; however, it is very likely, given his awareness that his own supporters are members of these groups. In his remarks during the debate, he even condoned them. Even after being told of the organization’s ties to white supremacy, he still did not explicitly condemn them.

Members of the Proud Boys saw his remarks and celebrated, vowing to stand by.

“President Trump told the proud boys to stand by because someone needs to deal with Antifa… well, sir! We’re ready!!” wrote Proud Boy Joe Biggs. Later, he posted, “Trump basically said to go f*** them up! This makes me so happy.”

Kathleen Belew, author of Bring the War Home: The White Power Movement and Paramilitary America, and an assistant professor of History at the University of Chicago, warned that the reaction was no surprise. On Twitter, she wrote, “Trump’s shout-out sounded like a call to arms, a green light that could be catastrophic.”

Trump’s remarks also brought in a surge of potential recruits.

“I already have gotten 25 emails just this morning from people asking about what they have to do to become members,” said Rex Fergus, a spokesman for the Proud Boys.

The Proud Boys deny supporting white supremacy. They market the group as a counteraction to the loosely organized anti-fascist movement known as Antifa. Enrique Tarrio, the current leader of the group, says the organization has "longstanding regulations prohibiting racist, white supremacist or violent activity.”

As Oregon’s Governor Brown said in a tweet, “Let’s be clear: The Proud Boys are white supremacists. Racism and hate are not forms of patriotism.”