In the midst of a global catastrophe, anti-lockdown protests provide a surprising, and unsettling, reaction to this pandemic, and the prime example of white privilege. 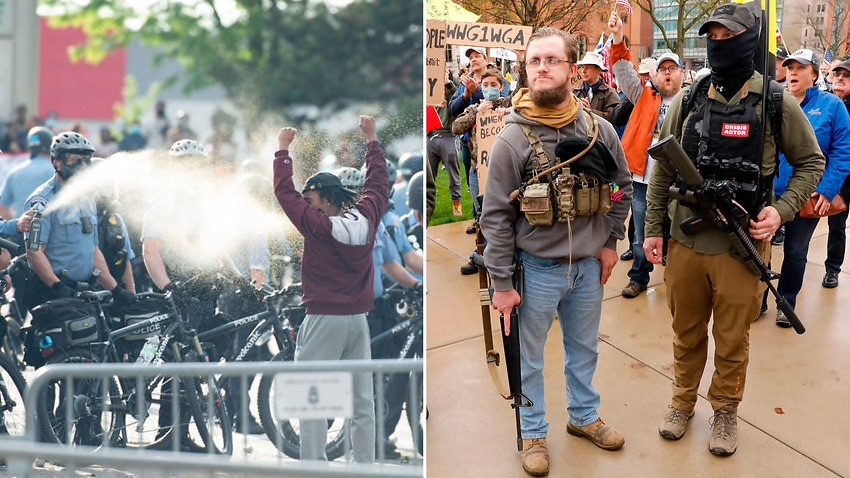 From social media to the daily newspaper, COVID-19 has become a worldwide catastrophe that has the entirety of America holding their breath, and watching their screens. Since March, our nation as a whole has taken different measures to mitigate the spread of the virus, resulting in state and local governments trying their best to enforce a stay-at-home order, while the national government recommends the public stay home. However, with an increase in the frustration of the American public about the spread of the virus and state governments enforcing new safety measures, a new issue has arisen: anti-lockdown protests.

Anti-lockdown protests have been surfacing around America within the past few months, where primarily white and armed men and women hold up signs demanding haircuts or claiming that they have the right not to wear masks—a stark difference from people of color protesting their right to survive, to speak, or to stay united with their children as seen throughout history. In the midst of a global catastrophe, anti-lockdown protests provide a surprising, and unsettling, reaction to this pandemic, and the prime example of white privilege.

‍Now, what is white privilege?

This definition leads to another question: How and why are anti-lockdown protests a prime example of white privilege?‍

This question has many answers; all different yet valid, but they can be separated into two distinct parts: what is being protested, and the authoritative response to it.

First, what is being protested in the Anti-lockdown protests is an important example of privilege. For decades, people of color have been protesting their rights to survive: #justiceforgeorge, #blacklivesmatter, or even protests against the ICE raids all stand against issues far more severe than the right to not wear a face mask indoors. Protesting things like not being able to get a haircut and claiming that the lockdown orders ‘violate rights,’ and ‘oppress’ people is indicative of the presence of white privilege and entitlement in the United States.  Wearing a mask, not being able to relax by the breach, or having to wait to get a haircut, is not oppression. Oppression is death by the hands of a flawed system, fighting for rights that are only guaranteed to you by the color of your skin. The technical term for oppression is “unjust or cruel exercise of authority or power” according to Merriam Webster, and a necessity to wear masks in public or to shut down unnecessary businesses for safety reasons is not unjust and is merely done for the protection of our society.

The most paramount example of white privilege however, is the response to protests, and the protests themselves. The ability to protest itself is a demonstration of white privilege. Lewis, an activist with The Liberation Collective for Black Sacramento, states, “I realize that doing business and just existing in my black skin will not give me the ability to defy the law,” in an article from the LA Times. As said here, the very act of being able to protest without repercussion is an example of a privilege that people of color do not hold. The lack of repercussion is evident in anti-lockdown protests around the nation, pictures of protests depict white men and women armed with guns screaming at officers who are faced with no violent consequences or arrest. Moreover, when looking back to previous protests by people of color, protests for lives are often met with tear gas and police enforcement. A prime example of this would be Minneapolis, where protests over George Floyd, an innocent black man who was murdered by a police officer., were initially non-violent. According to Amanda Marcotte from Salon Magazine, initially, a majority of protesters were “nonviolent and none were armed,” however, police “showed up ready to rumble” and with teargas. When compared to anti-lockdown protests in Michigan last month, pictures depicted armed white men and women yelling at police, who merely stood unarmed and silent, allowing the protesters to continue.

Although many may argue that the lockdown breaches rights and freedoms of Americans, and that white privilege doesn't exist, there must come a point where we put immediate societal safety before politics and realize privilege when we see it. The extent of white privilege has been hotly debated the more the term has been used, but it has become evident within the anti-lockdown protests. We as a society cannot waste our energy protesting a violation of rights when it is simply for the safety and protection of Americans, moreover, we must use the advantages that allow us to be privileged as a way to benefit society, and empower the minorities that need it.