Maren Hettler
and
January 16, 2021
in
World
Courtesy of The Conversation 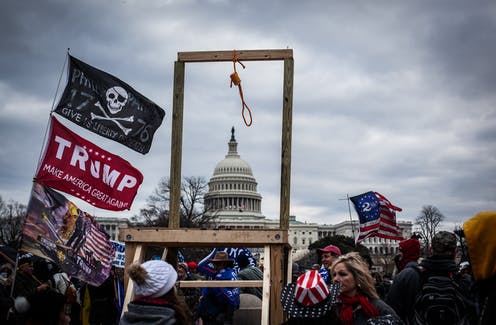 One sweatshirt, spotted amid the mob that stormed the US Capitol, read “Camp Auschwitz,” along with the message “Work brings freedom,” a translation of the words that greeted Jewish prisoners at the Nazi concentration camp. The back of the shirt said “Staff.”

A photo of the man wearing the sweatshirt was just one of many hateful symbols that have circulated after a mob - whose violence led to five deaths - caused chaos in Washington DC. Confederate flags and nooses were among other hate signs seen at the Capitol.

Other slogans, on flags, clothing, or signs, were code for multiple conspiracy theories and extremist ideologies. Here’s what you need to know about the symbols and far-right movements they represent.

Holocaust deniers and neo-Nazis were prominent members of the mob outside the Capitol. In one video, a participant is seen holding a flag with what some Twitter users identified as a swastika, though it isn’t entirely clear.

The shooter who committed the 2019 massacre at a New Zealand mosque appropriated symbols of the Crusades, and they’ve become popular with other far-right groups. Symbols such as medieval helmets or Templar and crusader crosses, are meant to represent the era of white, Christian wars against Muslims and Jews.

The green, white and black Kekistan flag was created by some members of the online 4chan community to represent a joke country named for "Kek," a fictional god they also created. It has long been present at right-wing and far-right rallies. The reason the Kekistan flag is so controversial is because its design was based on a Nazi-era flag. Younger right-wingers often display the Kekistan flag at rallies and events.

Arizona QAnon supporter Jake Angeli, well-known for his costumed presence at Trump rallies and far-right protests, was one of many members of the crowd with neo-Nazi tattoos. He has a mjolnir, Thor’s Hammer, on his stomach, Yggdrasil, the Tree of Life, on his chest, and right above his heart, a valknut, the “knot of the slain,” an old rune turned hate symbol that is commonly associated with white supremacists. The mjolnir has become a symbol aligned with the white supremacist neo-Völkisch” movement.

The tattoos of Yggdrasil and mjolnir on their own isn’t a cause for alarm, as they are popular among pagans and fans of Norse mythology, but the valknut is far more worrying. There is some debate about the original meaning, and its three interwoven triangles have been seen on a variety of objects from the Viking era. Heathens now use it to show that they are ready to be taken into the ranks of Odin’s warriors and die for the cause, as well as represent their ancestry. Today, the symbol is affiliated with racism, white supremacy, and the Wotansvolk Movement, a form of white nationalist paganism tied to neo-Nazi movements.

Many pagans are horrified by the way white supremacists have adopted their religious symbols. Norse imagery had a long history of being co-opted by the far-right. The Nazis used of Norse and Germanic runes, as do many modern day Nazis in groups such as the Nordic Resistance Movement and the Soldiers of Odin. The National Socialist Movement adopted the odal rune as its logo. Members of the Aryan Brotherhood are often seen with tattoos of runes and Viking symbols alongside swastikas and Celtic crosses.