Here's How We Can Support the AAPI Community

Gunshots rang out across Atlanta, Georgia on Tuesday night, as eight individuals, six of whom were Asian women, were shot to death and one was wounded

Eshaan Mani
and
March 20, 2021
in
Race
Courtesy of Time Magazine 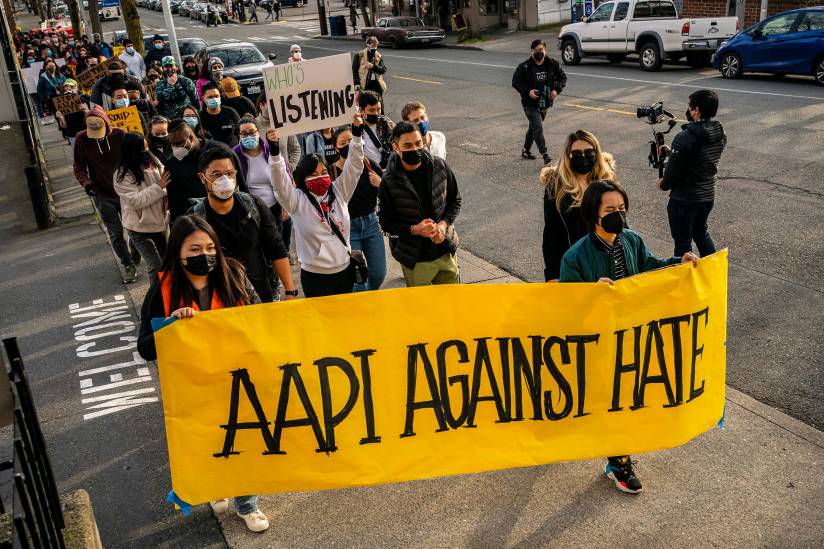 Trigger Warning: This article discusses matters of sexual assault and violence. If you are sensitive to this topic, please exercise caution while reading.

Gunshots rang out across Atlanta, Georgia on Tuesday night, as eight individuals, six of whom were Asian women, were shot to death and one was wounded. The offending gun was a 9 mm. pistol and the killings took place at three massage parlors. According to the police, 21-year-old Robert Aaron Long is in custody as a prime suspect. The BBC identified four of the victims as Ashley Yaun, 33; Paul Andre Michels, 54; Xiaojie Tan, 49; and Daoyou Feng, 44 and Elcias R Hernandez-Ortiz were identified as having been injured.

Four of the eight people were killed at Young's Asian Massage in a northwestern suburb of Atlanta, around 5 PM Eastern Time. About 47 minutes later, Gold Spa, in northeast Atlanta (a red-light district), was robbed and the bodies of three women were found. As soon as police arrived on the scene, shots were fired at the Aromatherapy Spa across the street. Another body was found. Atlanta police and the Federal Bureau of Investigation (FBI) are working together on the case.

The Suspect, His Motive, and Further Discussion

In a time when anti-Asian racism is growing, this incident is especially horrifying. Stop AAPI Hate and other organizations have spoken out condemning the shootings on Tuesday, saying the incident "will only exacerbate the fear and pain that the Asian-American community continues to endure." They cite nearly 3,800 reports of hate crimes against Asian-Americans across the USA over the past twelve months. The entire Asian American community was shaken and calls for Long to be indicted for a hate crime as well as murder-homicide resounded across social media platforms.

Investigators said it was too early to say whether the crime was racially motivated and instead pointed to the suspect's claim to the police. All but one of Long’s victims were women, and he told police that he committed the murders to eliminate his “temptation” and satisfy his “sexual addiction”. It has been confirmed that he went to rehab twice for this addiction. CNN reported that Long was a “deeply religious person” who “was distraught about his addiction to sex”; he relapsed after rehabilitation, "going to massage parlors explicitly to engage in sex acts." His parents kicked him out of the house on Monday night because of his addiction, which could have been a trigger for his rampage. It is lucky, however, that Long was arrested when he was, as he had plans to travel south to Florida and commit similar atrocities at a business tied to pornography.

This last quote, about Long’s visits to massage parlors, has been picked up on by several activists and experts. They decried the racist misogyny which could have led to the attack, explaining that the fetishization and hyper-sexualization of Asian and Asian-American women working in the service sector (specifically masseuses or sex workers) are rooted in American history. This problematic portrayal started with the Page Act of 1875, under which Chinese women were prevented from immigrating to the US, based on the claim that they were prostitutes. We are seeing the results of committing bigoted policies to law today.

Several prominent celebrities have condemned the shootings over their platforms. Actress Gemma Chan, of Crazy Rich Asians and Captain Marvel fame, posted on her Instagram: "We need to stop the dehumanization of Asians. We need to stop the scapegoating of Asians for Covid. We need to unite against all forms of hate." To All the Boys I’ve Loved Before star Lana Condor tweeted: “Wake up... your Asian friends and family are deeply scared, horrified, sick to their stomachs and wildly angry”. Toolkits are being shared across social media, with various guides being published about how to support the members of the Asian-American and Pacific-Islander communities.

The White House criticized the Georgia homicide, as President Biden denounced “vicious hate crimes against Asian-Americans, who have been attacked, harassed, blamed and scapegoated.” Vice President Kamala Harris, the first woman of Asian descent to hold the office, said to the Asian-American community: “we stand with you and understand how this has frightened and shocked and outraged all people.”

The White House confirmed that President Biden and Vice President Harris will meet in Atlanta with community leaders and state lawmakers from the Asian-American and Pacific Islander community. President Biden will also meet with Stacey Abrams on Friday.

On Thursday, President Biden ordered all US flags to be flown at half-staff to honor the victims of the shootings.

Atlanta mayor Keisha Lance Bottoms called for solidarity with the Asian community and recalled focus from the suspect’s motive to the way forward. “Regardless of the motivation, given the concerns the community already has in light of all the attacks that we've seen -- particularly against Asian American women and the elderly… we need to do everything that we possibly can to protect the most vulnerable among us."

Please find a list of resources to support the AAPI community below: