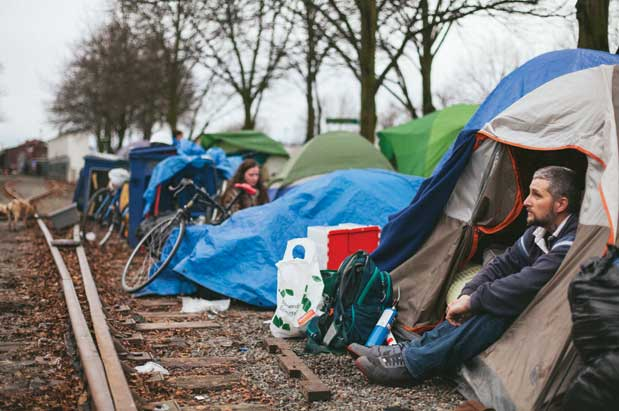 Foundations for Social Change, based in Vancouver, Canada, and the University of British Columbia partnered in 2018 to conduct The New Leaf Project (NLP), a study that debunked the popular belief that cash given to homeless people will be wasted rather than helpful. Many people think that money they give directly to the homeless will be squandered on alcohol or drugs, but the NLP results proved this thinking to be false.

115 participants were selected for the study; all participants were between 19 and 64 years old, were not struggling with substance abuse, did not have serious mental health issues, and had been homeless for at least six months. Researchers gave 50 participants $7,500 each and tracked their receipts over the next 12 to 18 months. Their spending was compared to that of the control group who did not receive any money.

Those who received the money defied stereotypes by using it to better their situations. Most put the money towards food, permanent shelter, transportation, and necessary medications. On average, they were able to save about $1,000 each over the course of one year. It took the control group around five months on average to find permanent housing, but the group that was given the money only needed about three months. The food security of those without the money only went up about 2%, whereas it increased by close to 37% for the cash recipients in the same time span.

Most cash recipients knew exactly what they wanted to do with the money as soon as they got it. One man, whose full name was not released for privacy, said he used it to take a computer class to help in achieving his goal of becoming a frontline worker for people fighting substance abuse. He was also able to move out of an emergency shelter and into a more permanent place of residence. Others used the money to invest in starting their own small businesses.

There were also positive trickle down effects from people receiving the money. Many homeless people were able to help their children and other family members. Tax payers benefited as well, as reducing the number of people staying in shelters reduces the cost of running them. Cutting the number of those staying overnight in a shelter by only 50 participants saved about $8,100 per person in their community over one year.

Homeless people are often seen as mentally unstable, lazy or addicts. Because of this, people tend to refrain from giving them money. The NLP study tears these stereotypes down, and shows that in many cases, cash can make a significant impact on their lives. This research serves as a strong reminder that we must continuously work to deconstruct our internalized biases and encourage meaningful and productive dialogue.