Six decades after Brown v. Board of Education, segregation in schools still persists.

Andrew Kim
and
February 11, 2022
in
Race
Courtesy of Getty Images 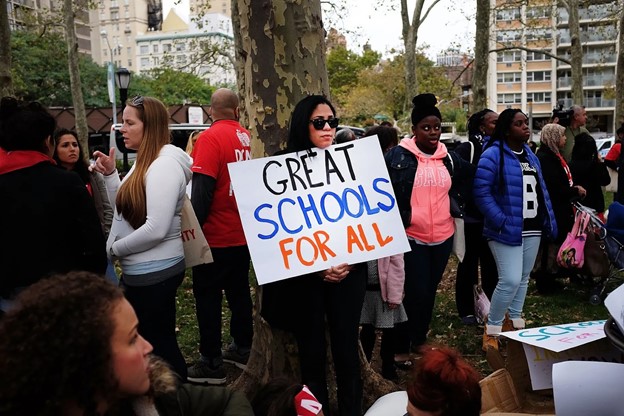 During a high school football game between two schools in Tennessee just 9 miles apart, Southwind High of Memphis and Houston High of Germantown, the parents of Southwind sitting on the visitor bleachers noticed the obvious wealth disparity between the two communities. The pristine artificial turf and scoreboard at Houston High were luxuries that students at Southwind did not have access to due to low school district budgets. At Southwind, 40 percent of students live in poverty and nearly all students are Black or Hispanic, whereas in Houston High, only 3 percent of students live in poverty and nearly all students are white. To understand why these two schools are so segregated, or more specifically why the education system in the United States is so segregated, we first need to understand the historical discrimination that contributes to the current situation, starting from Franklin D. Roosevelt’s presidency in the 1930s.

In 1933, U.S. President Franklin D. Roosevelt initiated the New Deal, a series of programs set to provide economic relief to the country after the devastating Great Depression. As a part of the New Deal, Roosevelt founded the Home Owners’ Loan Corporation, which aimed to expand home buying opportunities to Americans. However, this corporation developed residential security maps that labeled some areas, the residence of Blacks and Hispanics, as “hazardous” for mortgage loans; this labeling hurt the local schools in the labeled communities since “school district budgets are intrinsically tied to poverty taxes, meaning schools in poorer communities get less funding.” as said by Lauren Camera of U.S. News. This segregation is called redlining and it largely contributes to the segregated education system by preventing schools in poor neighborhoods from renovating and providing sufficient resources to their students. For example, in Shelby County, where Southwind High resides, “officials have tallied $500 million in deferred maintenance” with “obsolete air conditioners, unreliable heating systems,” and “old windows” as reported by Laura Meckler and Kate Rabinowitz of the Washington Post.

The segregation in our education system is further exacerbated by the fact that students in poor neighborhoods cannot simply attend a better school that suits their needs if they live outside of the school boundaries, which are set by law or the governing body of the school. In a study conducted last year in 2021, Tomás Monarrez and Carina Chien of the Urban Institute gathered school boundary data from 128 of the largest school districts in the US and found that almost all school districts used school boundaries to determine where elementary students went to school. Even though school choice programs were present on a small scale in upper-level grades, the residence of students remained the more important factor in determining where they went to school.

Monarrez and Chien point out that “policymakers have had numerous opportunities to amend the school boundaries to redress these harms, but many of them have simply chosen not to do so.” They acknowledge that a challenge to amending school boundaries is the fear that changing “boundaries to bring more Black and Hispanic kids into schools” would cause white families to “move elsewhere, — as happened in the ‘White flight’ of the 1950s, ’60s, and ’70s” during which white families moved out of areas becoming more racially diverse, another historical event that affects the present-day discrimination in our education system.

The implications of segregated schools are that low-income students get lower quality education compared to their middle and upper-class counterparts, and the consequence of this disparity extends beyond elementary, middle, and high school, but to college as well. Low-income students may forgo higher education due to their insufficient schooling, which puts them at a major disadvantage compared to their counterparts who are on track to graduate. Former New York City mayor Michael Bloomberg acknowledges at the 2019 NAACP Convention that “the sad fact is that the schools doing the worst job preparing students for success are generally in African-American and Latino neighborhoods.”

The issue of segregation in our education system needs to be confronted, and some efforts are being made to provide students, regardless of social and racial background, with equal opportunities to enroll in school. In Cambridge Public School District, a district serving Cambridge, Massachusetts in Greater Boston, parents make three school choices and put them in a lottery which allows for many families to get the school of their top three choices and for schools to have a more diverse student body. According to Cambridge Day, the lottery system “allocates school assignments based on available seats, ranked choices and socioeconomic balance” and  “gives 85 percent of families one of their three choices.” Since families with different socioeconomic backgrounds get equal opportunities in the enrollment process through the random lottery, a more diverse student body results.

In Washington D.C., most regular and charter schools follow a similar process to that of Cambridge schools in the enrollment process, allowing students to select up to twelve schools of their choice and allocating students through a lottery system.

Some other potential solutions to segregated education systems are to enact laws that require schools to reserve a number of seats for students outside of the attendance zone, provide equal enrollment opportunities to families within a certain distance of the school, or develop an enrollment system that allows families to request for several schools of their choice and randomize the selection through a lottery, similar to the system in Cambridge, Massachusetts.

It is important that school boundaries be redrawn as doing so would diversify school enrollments and allow for more equality in terms of “staffing, academic programming, student discipline rates, and student achievement” according to a report by the Urban Institute. Students, whether they come from low-income or middle-class families, will be able to receive similar educational opportunities and facilities.

As Houston High and Southwind High play against each other on the football turf, the game isn’t the only tension present between the two schools. Racial, ethnic, social, and geographic tensions are present as well, and so long as school districts reinforce segregation, those tensions are bound to persist. The consequences of segregated education systems, the principal one being the widening of the racial and socioeconomic achievement gap, will perpetuate segregation in our country if action is not taken. As more schools follow the footsteps of schools in Cambridge and Washington, we may stymie the widening achievement gap and let segregated schools hopefully become a thing of the past.