Though many nations are torn apart by havoc from war, few in recent history have suffered as much as Yemen has. 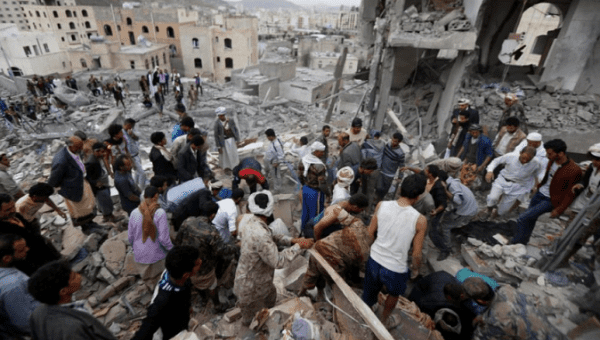 Though many nations are torn apart by havoc from war, few in recent history have suffered as much as Yemen has. The country – that was once full of culture and history – and whose citizens are now reduced to eating leaves, suffered crises similar to Syria and Libya in 2011  and  their plight continues to worsen. Foreign intervention to "save" the state inadvertently contributed to over 100,000 deaths and a famine affecting 24 million people. The wide eyes of a starving child became the face of a sectarian struggle that has transformed the Middle East’s poorest country into a humanitarian nightmare. Such is the cost of war in Yemen.

In 2011, the Arab Spring, a series of anti-government protests, overwhelmed countries in the Middle East and Eastern Africa, mainly of Muslim dominion. Demanding democracy, protesters toppled many authoritarian leaders, including former Yemen leader Ali Abdullah Saleh. The transfer of power to his deputy was a grave disaster. As the leadership struggled to keep order in a country already filled with turmoil, tragedy awaited Yemen and its future.

Making an already-bad situation worse, Houthis, a militia backed by Iran, then took advantage of the power struggle and conquered major parts of Yemen, eventually conquering Sanaa, the largest city in Yemen. Immediately, the U.S. formed a coalition with Saudi Arabia and the UAE to defeat an Iran-backed unit in order to reclaim the power of Saleh’s deputy, Hadi. What began as a conflict between two political parties transformed into a battleground of exploitation for its neighbors. A war meant to last a few weeks turned into years of nightmare. Yet, it is not the politics or the war that truly matters; it is the people who suffer as a result of it.

War stops but human atrocity does not.

Yemen imports 90 percent of its food supply but, because of the conflict, many of Yemen’s sea ports have closed, and goods can’t get in easily. The food that is available is too expensive for families to purchase, and as a result, the economy is in shambles with many having lost their sources of income. Since 2011, Yemen has been in a state of political crisis, including protests against poverty, unemployment, corruption, and president Saleh’s plan to amend Yemen’s constitution and eliminate the presidential term limit, in effect making him president for life. This conflict resulted in a famine affecting 20 million people.

Yemen is reaching a climax “beyond which it will be impossible to prevent massive loss of life as a result of widespread famine across the country,” warned United Nations relief chief Mark Lowcock in 2018. The crisis of war forced – and continues to force – people to live without employment and exponential inflation. Families watch their children die in cries of anguish because few can afford medicine.

Every five minutes, a child in Yemen dies from hunger or disease. And such is the condition of a once-peaceful nation. 20 million citizens are malnourished. Nearly 4 million Yemenis are displaced. The lack of safe drinking water has led to one of the largest and fastest-spreading cholera outbreaks in modern history. Consequently, as a country that has less than 1,700 functional medical facilities for a population of 20 million, its struggles resulted in 3,895 related deaths since October 2016.

Combined with famine and cholera, recent surges of COVID-19 are drastically worsening the situation. Yemen recently recorded its highest number of cases in a single day as a UN body raised concerns about the country’s high fatality rate, posing a terrifying threat to its weakened population. With the lowest testing rate of any country in the world, at just 0.004%, Yemen is already digging thousands of graves each day for coronavirus victims. Despite the help of numerous aid agencies like the UN, the ongoing humanitarian crisis started by the Saudi coalition worsens the country’s already poor conditions. In addition, their struggles are feature rampant torture, extrajudicial bombings of civilians, and limited access to basic necessities.

Meanwhile, Saudi Arabia’s indiscriminate and incessant bombing has become a civilian massacre. In 2018, Saudis used U.S.-made bombs to kill a bus with 51 people, 40 of them children. Countless other houses of civilians, not terrorists or rebel groups, have been bombed. Over 1,000 innocent lives are taken each year from Saudi Arabia’s reckless bombing. If there’s anything we learned from the Kashoggi murder almost two years ago it is that Saudi Arabian leaders have continuously failed their citizens. Under Prince Mohammed, Saudi Arabia has tried to drive the Houthis into submission through bombing raids, blockades of aid, and other punitive measures while preventing Yemen from using weapons largely provided by the United States. With increasing civilian casualties, Saudi Arabia has only blithely denied responsibility or, on occasion, claimed they would investigate.

We need to ask ourselves, “What will we say to the man whose 27 family members were killed? What do we tell the parents and siblings who are the sole survivor of their family? How can we simply stand by when an innocent civilian’s life is taken away?”

With the UAE, a crucial ally of the Saudi coalition, withdrawing from the war and a six month ceasefire, Yemen  is taking its first steps to ending their torture. Negotiations aren’t just needed; they’re wanted and demanded by the Yemeni people. The U.S. should play a part in solving the crisis by pulling its arms deal in order to prevent such atrocities. This carnage, disguised as a tool for peace and stability, needs to be halted immediately.

If you would like to make a difference right now, to do what you can to fight for Yemen, you can donate to any of these funds, or sign any of these petitions. Your voice can and must be heard at this time, so please take a few seconds to speak out.

Donations to Support the People of Yemen:

Petitions to Push the U.S. Government to Make a Change:

Resources to Further Educate Yourself on What is Occuring in the Middle East and Yemen: