"Guilty of Being Human": Sha’Carri Richardson Suspended From Olympics Due to Marijuana Use

American sprinter Sha’Carri Richardson was set for a spectacular run at the Tokyo Olympics this month, but she has been suspended from the Games for one month after testing positive for THC, the chemical found in cannabis

Eshaan Mani
and
July 4, 2021
in
Sports
Courtesy of Axios 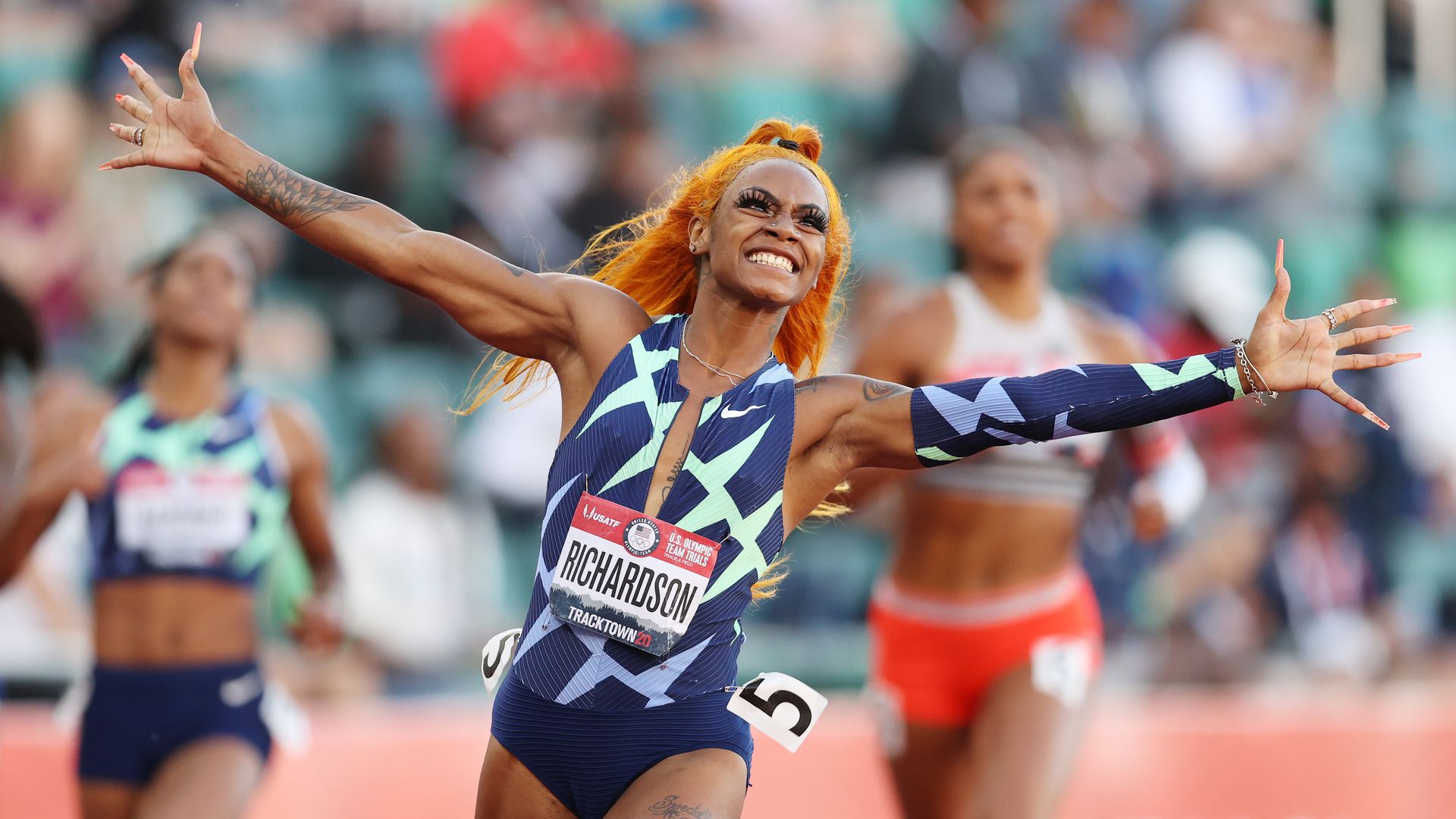 American sprinter Sha’Carri Richardson was set for a spectacular run at the Tokyo Olympics this month, but she has been suspended from the Games for one month after testing positive for tetrahydrocannabinol (THC), the chemical found in cannabis.

The Texan track sensation is known for her iconic quotes: “I am it,” “I am who I say I am,” and “Talent is talent. If you got it, you go fast.” With equally momentous performances, the 21-year-old could be America’s fastest woman after winning the 100-meter race at the U.S. Olympic trials in Oregon in June with a time of 10.86 seconds. She caught everyone’s attention with her long orange hair and an emotional sprint into the stands to embrace her grandmother, who raised her. She was aiming to become the first American woman to win the Olympic 100-meter title since Gail Devers in 1996, as she has put in five runs under 11 seconds this season.

Despite her place in the hearts of sports fans, her spot on Team USA is in jeopardy because of her use of marijuana. The United States Anti-Doping Agency (USADA) announced on Friday, July 2, that Richardson had accepted a one-month suspension beginning on June 28 after a failed drug test. She is not appealing the case.

Most athletes who test positive for a substance of abuse, which THC was classified as this year, receive a three-month suspension on the condition that they can prove their use of the substance was “out of competition” and “unrelated to sport performance.” In Richardson’s case, however, completion of a counseling program regarding her cannabis habits shortened the length of her ineligibility to one month.

The legalization of marijuana in several states makes this matter more confusing as well. Several individuals across social media platforms have pointed out that it is legal to smoke marijuana in the state where Richardson did so. Furthermore, THC does not enhance performance. However, the USADA has continued to ban the drug because it meets two of the three inclusion criteria: a) it poses a health risk to athletes, b) it has the potential to enhance performance, and c) it violates the spirit of sport.

The USADA released a statement about the unfortunate ruling: “The rules are clear, but this is heartbreaking on many levels; hopefully, her acceptance of responsibility and apology will be an important example to us all that we can successfully overcome our regrettable decisions, despite the costly consequences of this one to her,” Travis Tygart, chief executive of USADA, said Friday in an emailed statement.

Richardson’s Reasoning for Marijuana Use

Richardson stated that she used cannabis to cope with the loss of her biological mother one week before her 100-meter race in Oregon. On NBC’s TODAY show on Friday morning, Richardson said that a reporter had informed her of her mother’s death, “I want to take responsibility for my actions. I’m not looking for an excuse.”

"If I'm allowed to receive that blessing [to compete in Tokyo], then I'm grateful for it," Richardson also stated. "But if not, right now I'm just going to focus on myself."

In a heartfelt plea, Richardson said: “Don’t judge me because I am human. I’m you. I just happen to run a little faster." Richardson openly shared her own struggles and humanity, drawing thousands of people to rally behind her story. As reported in the Washington Post the only crime that Richardson is “guilty” of is being human - of using a coping mechanism to avoid her pain, which sadly, is exactly what she ultimately received more of.

Besides the widespread outcry on social media platforms, politicians such as Rep. Matt Gaetz (R-FL.) and Sen. Cory Booker (D-NJ.) spoke out against the ban. Gaetz’s Tweet reads as follows: “The press who love to bathe in the intersectionality of race-gender-sports should ask @JoeBiden if he believes Sha’carri Richardson should be barred from representing America for using a drug legal in most states that doesn’t impact performance. I sure as hell don’t.”

Booker also tweeted in support of Richardson, writing: "Sha’Carri is an incredible athlete with a bright future. That her dreams are being crushed over a substance that should be legal across the country is devastating and wrong. Her heartfelt apology shows her strength even in the face of adversity."

Another influential Democrat, Rep. Alexandria Ocasio-Cortez (D-N.Y.), called the decision to ban Richardson from competing “an instrument of racist and colonial policy,” blaming the International Olympic Committee for the decision.

President Joe Biden stands out from the majority of his party in his position against the legalization of marijuana; five Biden staffers were fired after admitting to marijuana use, and Biden has been reluctant in moving forward with marijuana-related legislation.

Even figures in Hollywood have commented on the events of the past few days. Canadian-American actor Seth Rogen took a stand against the banning of Richardson, chalking it up to racism much like Ocasio-Cortez. He quote-tweeted the TODAY Show’s post, blasting Team USA: “The notion that weed is a problematic “drug” is rooted in racism. It’s insane that Team USA would disqualify one of this country’s most talented athletes over thinking that’s rooted in hatred. It’s something they should be ashamed of. Also if weed made you fast, I’d be FloJo.” ‍

Backtracking a bit, one might wonder: If Richardson's ban is 30 days and ends on July 27, then why can't she compete in the Olympic 100, which starts on July 30? A statement from the USADA said: "Richardson’s competitive results obtained on June 19, 2021, including her Olympic qualifying results at the Team Trials, have been disqualified, and she forfeits any medals, points, and prizes.” Essentially, her first-place finish at trials has been wiped out. She still could be a part of the team but the relay pool is filled with athletes who still have results from the trials this past month. Richardson’s lack of results from Oregon would likely lead to “legal wrangling or cooperation from other athletes,” as an article from ESPN put it, to allow her on the team.

However, it is this hope that keeps several of Richardson’s fans going. In any case, Richardson herself acknowledges that “This is just one Game[s]. I'm 21, I'm very young. ... I have plenty of Games left in me to compete in and I have plenty of talent that backs me up because everything I do comes from me naturally. No steroid, no anything," she said. "After my sanction is up, I’ll be back and ready to compete," Richardson said. "This will never happen again."

How Sarah Fuller Revolutionized the World of Sports