Greek Life: the Reasoning Behind the Date Rapes that Occur Within Colleges

Sexual assault is still at large in colleges and universities.

Tiffany Vuong
and
December 9, 2019
in
Campus
Courtesy of USA Today 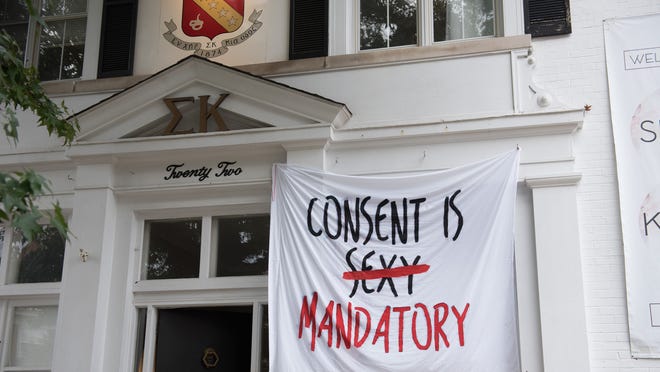 Sexual assault is still at large in colleges and universities. A recent study by Fox Business has inquired that 1 out of 3 students were sexually assaulted at University of North Carolina. This isn’t an issue just surrounding one particular university — this issue is one that affects all schools, no matter the reputation or prestige. Furthermore, data shows that 31% of women from Georgetown University, 28.4% from Yale, 25.5% from University of Virginia, 24.5% from Brown University, 24% from Harvard, and 23.7% from John Hopkins University, has reported that they were sexually assaulted during their time of enrollment.

During October, there were several rape allegations against a fraternity, Sigma Pi, at University of California, Santa Barbara (UCSB). After the first rape had occured, UCSB administration’s publication did not take action against fraternities. The publication also did not release the name of the fraternity in which the rape occured in. The email released by UCSB simply stated “additional incidents may have occurred at other fraternity events in Isla Vista.” A couple weeks later, several rapes occurred following a Halloween party in that same fraternity. Had the college administration warned women of the possible “date rape” that occurred at Sigma Pi’s parties, those women would have avoided being in a compromising position all together.

Not only should the perpetrator be held accountable, colleges and universities must also be held responsible to inform students about the possible dangers of going to fraternity/sorority parties — especially those that have history with sexual assault allegations. More sexaul assault cases would have been avoided if students had been notified, as shown at UCSB.

Unfortunately, freshmen women are at most risk by perpetrators. Because freshmen are inexperienced to the college environment and necessary safety requirements, this makes them an easy target for perpetrators. Informing these students about the fraternities with a repuation of sexual assault will allow them to be better informed about which events to avoid.

According to KPBS (PBS and NPR for San Diego, California), “Experts and Greek insiders agree that a competitive, testosterone-driven environment fueled by alcohol and casual sex is part of fraternities’ sexual assault problem. So are the large-scale parties at fraternity houses, which can be ideal surroundings for predatory behavior.” Studies from the NASPA (National Association of Student Personnel Administrators) journal also indicate that fraternity members are more likely to commit rape than non-fraternity individuals. The strong “brotherhood” environment found in fraternities also gives fraternity members an incentive to not report any sexual assault that occurs within that fraternity. This is a strong reason as to why many victims of rape are often discredited. Many question their honesty when other fraternity members (beside the perpetrator) do not recount or witness the event. This is an incredibly toxic environment that should not be tolerated and is often overlooked by college administration. Perpetrators and those who “protect” them, should be held accountable, and not supported. “Greek life” is not a shield to hide behind.

Mental Health in 2020: How Loneliness Morphs into Self-Improvement