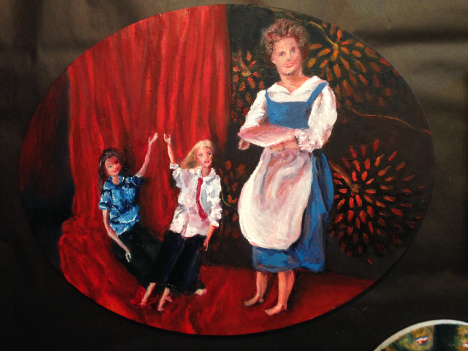 My concentration explores the subjects of gender identity, gender roles, and sexuality by use of portraying Barbie dolls dressed as the opposite of their assigned genders. Gender is often misinterpreted as a black and white concept, when in reality people sometimes feel more comfortable in their own skin by pushing the boundaries of gendered fashion stereotypes beyond their biological assignments. I displayed concept by cross-dressing Barbie dolls to explore the topics of gender roles, gender identity, and sexuality. I utilized Barbie dolls because they are not only nostalgic, but also a representation of a perfect body and lifestyle. By portraying the most beautiful and glamorous dolls as gender queer, I’m trying to show that anyone can be happy in their own skin. I want to display that there is something beautiful in self-expression, and that being different is not bad or odd at all. It’s all fluid, man.

In my first piece, I depicted two female Barbies in menswear being served by a male Ken in a dress. I used an oval shaped frame because I wanted to replicate the nostalgia of the Barbie theme with a more vintage feeling. My second piece shows two male Ken dolls going to prom, one dressed as a man, and the other as a woman. The point I am trying to express is that happiness can be achieved no matter how people choose to express themselves. I only included their lower faces, honing in on their smiles. The oval frame is again utilized to mimic a family photo on a fireplace that serves to bring back positive memories. My third piece displays a whimsical fairytale scene of two Barbies dressed as the opposite of their assigned genders. Again, the main theme is that a happy ending is achievable with any lifestyle. In the end, I hope the viewer takes away a sense of acceptance and nostalgia from my pieces.

Understanding Gender in the Workplace and Beyond