Human rights violations by the Chinese government have caused diplomatic boycotts of the 2022 Winter Olympics by multiple countries.

Maren Hettler
and
February 20, 2022
in
Sports
Courtesy of Getty Images 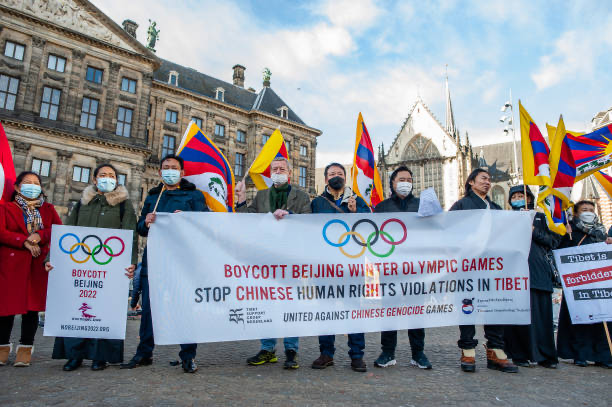 Human rights violations by the Chinese government have caused diplomatic boycotts of the 2022 Winter Olympics by multiple countries. The mass incarceration of Uyghur Muslims and the lack of human rights in Hong Kong have prompted activists to protest this year’s Games. In a letter, over 180 advocacy groups called for world leaders to boycott the Olympics, saying that “anything less will be seen as an endorsement of the Chinese Communist Party’s authoritarian rule and blatant disregard for civil and human rights.”

Over the past few years, over one million Uyghurs have been detained in what the Chinese government calls “re-education camps.” There have also been reports of sexual abuse and torture by past detainees.

Additionally, the Chinese government has been accused of human rights violations against pro-democracy protesters in Hong Kong. Protests started because of a bill that would have allowed “criminal suspects to be extradited to mainland China under certain circumstances,” and interactions between the Hong Kong police and protestors became more and more violent.

Calls for a boycott intensified when Peng Shaui, a famous tennis player, accused Zhang Gaoli, former vice premier of China, of sexual assault. Her accusation was censored by the government after only 20 minutes and nearly all references to the allegation were removed from the internet.

So far, 14 countries have declared a diplomatic boycott of the Games, meaning that no government officials will attend, but athletes will still compete.

Jen Psaki, the White House press secretary, said that the US “will not be contributing to the fanfare of the Games.” However, with the strict COVID-19 protocols in place, including mandatory quarantine and daily COVID tests, few officials were likely to attend in the first place.

The Chinese Foreign Ministry said that the United States has “clearly violated the Olympic spirit” and "will pay a price for its erroneous actions.” The Ministry did not specify what the price would be. According to the Global Times, a newspaper owned by the Chinese government, “If any country is encouraged by extremist forces to take concrete actions to boycott the Beijing Winter Olympics, China will definitely retaliate fiercely.”

In the past, Olympic boycotts have effectively brought attention to issues, but did not change the behavior of the host countries. During the 1976 Montreal Summer Olympics, over 20 African countries withdrew to encourage the exclusion of New Zealand after its rugby team toured segregated South Africa. In 1980, dozens of countries refused to compete during the Moscow Olympics, and during the 1984 Summer Olympics in Los Angeles, the USSR and others claimed that their athletes would not be safe if they competed. In the end, host countries didn’t change their behavior and it was the athletes who suffered.

Although it is unlikely that a boycott will change China’s policies, it will put pressure on the Chinese government to put an end to its unjustifiable human rights violations.

The Electoral College: “The Most Dangerous Blot in Our Constitution”