The bill intends to prevent the “inferiorization of women”; however, what it actually does is strip away the right of young women and girls to practice their faith and express their autonomy

Valeria Eggers Cortés
and
May 3, 2021
in
World
Courtesy of Scary Mommy 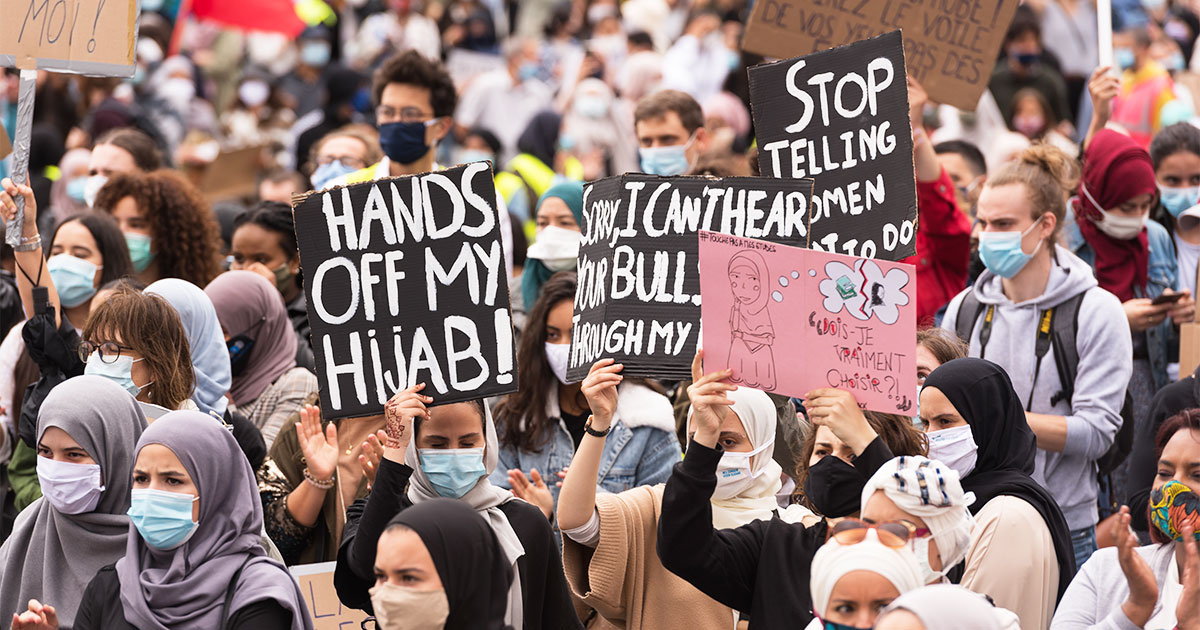 Home to the largest Muslim community in all of Europe, France has recently sparked outrage within the international community. With anti-Muslim sentiment spreading at an alarming rate, surges of Islamophobic behaviors have concerned France’s Muslim community — as these behaviors are now being institutionalized by the government.

Since 2010, when France became the first Western country to ban full-face veils in public, newer policies have actively continued to limit practicing Muslims. In what appears to be a direct act of religious censorship and the discrimination of Muslim practices and beliefs, the French government has further continued to push the prejudicial stigmatization of Muslims.

The most recent actions of the French Parliament? Passing an amendment that bans anyone under the age of 18 from wearing a hijab in public.

The bill — presented as a “neutrality principle” — would be added to a law introduced to address religious extremism. Additionally, other garments of Muslim clothing such as burqunis, body covering swimsuits, would be banned in public pools and beaches, whilst accompanying mothers would also have to refrain from wearing a hijab.

Prohibiting “any conspicuous religious sign, dress, or clothing,” French president Emmanuel Macron justifies the ban stating that the hijab is not in accordance with French ideals and the ban of face-covering would empower women, as he and his government believe that said pieces of clothing signify a lower status for women than men in public.

Online activists have been quick to criticize the ban, with millions of users using social media to express their concerns in regard to the ban. The distress this brings is completely understandable, as Muslim women already feel unwelcome in many parts of the globe as Western media continues to portray negative representations of the Muslim community. But now the prospective ban is only heightening Islamophobic sentiments across the country.

Alongside the hashtag #HandsOffMyHijab, online users have labeled it a “separatist bill” that not only enables Islamophobia, but also takes away the right for women to choose what they want to wear. The bill intends to prevent the “inferiorization of women”; however, what it actually does is strip away the right of young women and girls to practice their faith and express their autonomy. It blatantly dictates what women can and cannot wear, with no room for their religious beliefs.

International organizations such as the United Nations and Amnesty International have designated the bill as a serious attack on rights and freedoms as it portrays a one-sided perspective of Muslims.

Clearly enough, this outrightly targets the close to 6 million Muslims currently living in the country, singling out the minority within France. Although the ban has not been passed as a law, as it still needs the approval of France’s National Assembly apart from Parliament’s decision, it shows a clear image pointing to the views of the majority.

Undoubtedly, religion bans will only succeed in perpetuating anti-Muslim sentiment, portraying characteristics of the religion as “terroristic” and casting off its own citizens as if they don’t belong in the country — at least not with their religious beliefs. Whether they choose to wear hijabs or not, women must have the right to choose. To choose when, where, and what they want to wear, fully expecting the government’s support.

Having the unalienable right to freedom of religious expression, the country they see as home must battle anti-Muslim sentiments in the law instead of setting the precedent for future discriminatory bills that would only further marginalize Muslims.