My utopia can be boiled down to the idea that everyone matters and is universally accepted. 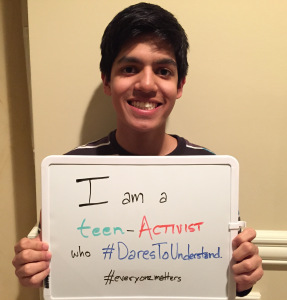 The other day in class we were asked to write about what our utopia would look like. My utopia can be boiled down to the idea that everyone matters and is universally accepted. It hurts my heart to know that people exist who teach their kids to hate and make people feel as though they don't matter. It is ludicrous to think that people genuinely hold such ignorant prejudice that they oppose basic liberties such as gay marriage. All across the world groups are marginalized, discriminated against, violated, and persecuted, and it is entirely unacceptable. We as humanity are an amalgamation of different identities and traits and it is a beautiful thing. Everyone matters today, tomorrow, and everyday. We must embrace that fact, accept it, and teach it. I hope for a world where every school recognizes this day and teaches love, acceptance, and one of the few things that is objectively true in this world: that everyone matters. We cannot afford to teach the bigotry that allows for discrimination, hate crimes, and injustice. We have lost far too many children to suicide. Children are killing themselves because countries, parents, and so-called humans have decided to take it open themselves to profess bigotry through ignorance. We cannot sit by and watch minorities be profiled, targeted, and oppressed. We cannot rest until everyone has full grasp of the human rights they are entitled to. We cannot allow for any type of injustice or inequality to run rampant in our twenty-first century society whether it be racism, homophobia, religious intolerance, sexism, socioeconomic discrimination, or any form of ignorance. We must learn from our mistakes and cultivate and preach the idea that everyone matters. We must let it be so engrained and indoctrinated in our cultural fabric that we do not lose another child to suicide, or another African American to prejudiced behavior, or another trans-woman to hate crimes.

I pray that the world will hold the idea that everyone matters as a dogma that is so inescapable that I do not have to fear my children being harassed due to sexual orientation, being raped, or being scared expressing themselves. I want a world which is safe for all and accepting of everyone and there is nothing utopian about that. It is achievable and necessary. We need equality and social justice now - we must allow for acceptance to define us and move towards a world which universally allows for all humans to have their basic human rights and that is not something that is too much to ask for or something I will ever stop fighting for.

It is a simple concept - everyone matters - and regardless of the religious, moral, or honor code you practice - respect is a priority. We must respect each other and our pursuit of happiness and life. We must live by the doctrine that everyone matters. Intersectionality is everything and we cannot let injustice define our generation. Injustice is our fight and I look forward to winning. Sometimes I fear my words are redundant, but I realize that my words will only be superfluous when justice is truly achieved.

I wish for a community around me which is receptive to my efforts, but regardless I will remain dogged in my fight for social justice. The casual utterances of derogatory terms, racial micro-aggressions, and belittling statements will not go unchallenged by me - because I refuse to live in a society where ignorance can remain commonplace without correction, education, and explanation. We must create an environment which is economically, socially, and educationally viable for all and I encourage everyone to stand with me in that.

Today, I am embracing my identity as an American-Muslim, non-conformist, Bangladeshi, peaceful activist, Princeton Day School student, and unconventional high schooler. I am proud of the diversity of myself, my school, my country, and my world. I am hopeful for a better tomorrow. I am determined to see a world which is respectful, understanding, and accepting. I am thankful for the people, schools, and organizations who are vehemently fighting for equality. I am unafraid to educate, integrate, and advocate until I truly see a world where everyone matters and bias no longer impedes our progress.