Meet Eugene Goodman. The 40-year old D.C. native and Army Veteran has been nominated for a Congressional Gold Medal, one of the highest honors bestowed upon civilians, following his courageous actions during the Capitol invasion.

Kendall Carll
and
January 24, 2021
in
World
Courtesy of CNN 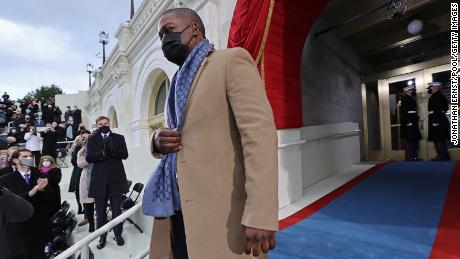 The Capitol raid was the climax of a divisive administration, false claims of election fraud, and rising white supremacy. Across the country, Americans watched as so-called patriots invaded the seat of government bearing Confederate flags, weapons, and vows to reclaim a “rigged” election. While January 6th will go down as one of the darkest days in American history, stories of courageous heroism offer hope that the country will not fall to deranged extremists.

Meet Eugene Goodman. The 40-year old D.C. native and Army Veteran has been nominated for a Congressional Gold Medal, one of the highest honors bestowed upon civilians, following his courageous actions during the Capitol invasion.

The lone officer stared down a mob of white supremacists as they attempted to breach Congressional chambers. Retreating down a hallway and up two flights of stairs, the now-viral video captured by a HuffPost political reporter shows Goodman steering the mob away from their target. Police experts explain that Goodman was not fleeing, but leading the rioters away from members of Congress. The video shows Goodman backing up a flight of stairs before he takes a glance to his left. Just a few doors down the hallway, armed officers were securing the Senate chamber’s entrance where the entire United States Senate, dozens of congressional officials, and Vice President Mike Pence were sheltering in place. Goodman, armed with only his collapsible baton, lightly shoved the group’s leader, baiting him away from the Senate and towards the backup officers with whom Goodman was coordinating a secondary response.

Goodman’s quick thinking and decisive action likely preempted what could have been a fatal confrontation. Kirk D. Burkhalter, a professor at New York Law School and a former New York City police officer, claimed that the death toll for the day would have been higher if Goodman had made different choices. Burkhalter, referencing photos of rioters holding zip-tie handcuffs, continued, “it’s not unreasonable to say that [these people] were ready to take hostages, . . . Officer Goodman really helped avoid a tremendous tragedy."

Some of Goodman’s colleagues attribute his heroic actions to his time in the Army, where he was deployed to Iraq for a year with the 101st Airborne Division. For his four years of service from 2002 to 2006, Goodman was awarded the combat infantryman badge, proof that he was engaged in ground combat. A close friend of Goodman’s has this to say about his combat abilities: “he’s been in hostile firefights, so he knows how to keep his head.”

Support for Goodman has been resounding. From social media hashtags to the halls of Congress, the public is showing their support for the officer. A trio of bipartisan lawmakers has introduced legislation that would bestow Goodman with the Congressional Gold Medal. Past honorees of this high award include the Tuskegee Airmen, Martin Luther King Jr., Coretta Scott King, and the Black women mathematicians who worked at NASA during the mid-1900s.

A mild-mannered and generally reserved individual, Goodman is ambivalent about being in the limelight as he fears becoming a potential target for far-right extremist groups. Despite his newfound fame, Officer Goodman maintains the same humble attitude as he did before the insurrection. Goodman himself put it best, “my job is to protect and serve . . . [and] on that day, I was protecting.”