Environmental injustice is disproportionately impacting low-income and colored communities, an issue that has only been further exacerbated by the COVID-19 pandemic 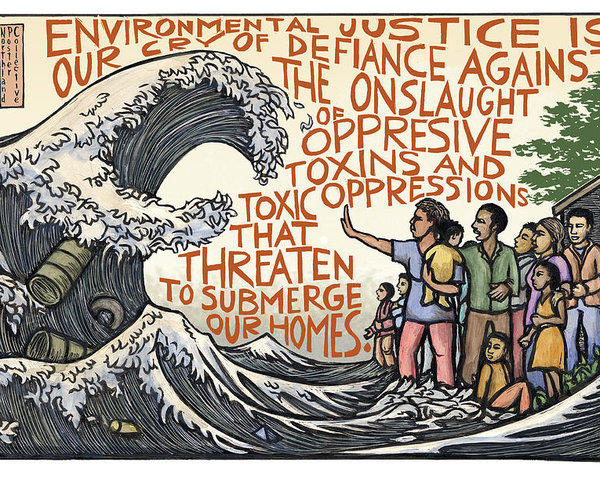 The History Behind Environmental Injustice

What makes environmental injustice so deadly, and how can we better understand it? Well, in order to fully grasp the gravity of this term, one must first embrace what it is not. According to the Environmental Protection Agency (EPA), environmental justice is the “fair treatment and meaningful involvement of all people regardless of race, color, national origin, or income with respect to the development, implementation, and enforcement of environmental laws, regulations, and policies.” So the inverse ideology would imply an opposite definition, meaning that the term’s counterpart is unfair, discriminatory, and systematically corrupt in nature, which is an accurate summary of what environmental injustice is and continues to be.

“For more than a century, corporate polluters and cynical public officials have dumped waste and placed facilities that spew toxins in or near communities of color, taking advantage of the residents’ relative lack of political power.”

In a Teen Vogue article about this multidimensional problem, journalist Lincoln Anthony Blades explores the many discreet ways that government officials often abuse their political power when interacting with the environment. Some examples include establishing dangerous waste sites within the vicinity of powerless communities (politically or economically) without consulting residents, limiting under-privileged residential areas from receiving safety upgrades, or even forcibly using Native reservations for waste disposal or garbage transmission. As a matter of fact, one of the most famous cases of environmental racism involved the Dakota Access Pipeline, an oil pipeline that could prove detrimental to neighboring valuable resources in the event of a spill. This pipeline happened to be directed away from Bismark, a predominantly white, middle-class city, and redirected towards a Native American region. “We have a lot of black and brown, Native American, and immigrant communities that are basically sacrifice zones because they are the dumping grounds for these pollution-intensive facilities,” said Sacoby Wilson, an environmental health scientist at the University of Maryland, in an interview for Yale Environment 360.

Another case example is not as recent, but still extremely relevant to the history of environmental injustice. Taking place in 1979, a group of African-American Houston homeowners named the Northeast Community Action Group (NECAG) gathered to stop their city from constructing a landfill near their neighborhood. Under the legal direction of Linda McKeever Bullard, they filed a lawsuit named Bean Vs. Southwestern Waste Management. This lawsuit shed light on the massive elephant in the room: for decades, Houston had been building approximately 80% of their incinerators and landfills near primarily Black residential areas.

“When a corporation decides to make a unilateral decision that threatens minorities’ lives without presenting them any options (the same ones granted to white, middle-class citizens) the inherent racial discrimination in their plans is laid bare.” - Lincoln Blades, Teen Vogue

This is a very strange time for all of us: women giving birth amidst a pandemic, children having to split their time between school and home, culturally monumental events being cancelled, the economy failing, death tolls rising... the world as we know it is undergoing a dramatic shift towards the unknown. However, this global health crisis isn’t affecting everyone on an equal basis, for even the virus seems to be exposing many instances of environmental injustice. In Louisiana, African-Americans account for a whopping 70% of the state’s pandemic deaths, but represent only less than one-third of the population. In Illinois, African-Americans are perishing at the hands of coronavirus at an alarmingly speedier rate than white residents, five times more to be exact!

“In this country, we have structural inequalities that are a major factor of why we see these different social and environmental conditions in communities of color. You see these different patterns of land uses, whether it be transportation networks, large highways where you have a lot of traffic, or industrial activity.” - Sacoby Wilson, Interview with Yale 360

Many medical experts and public health specialists have reported that the root of this lethal inequity stems from an intricate set of environmentally unjust factors. According to a report from Harvard’s T. H. Chan School of Public Health, there have been massive correlations noted between long-term exposure to air pollution and the virus’ level of fatality. These Harvard researchers have officially concluded that “COVID-19 mortality rates in areas with a higher level of pollution are 15% higher than in areas with an even slightly lower level of that same pollution.” Statistically speaking, people of color and low-income communities are more likely to reside in these neglected and polluted areas, where the pollution levels have been linked to obesity, pulmonary disease, and cardiovascular disease. Such poor health conditions have been confirmed as underlying agents that aid in the growth and deadliness of COVID-19, which explains why there is currently an uneven death toll between white and high-income communities when compared to POC and low-income neighborhoods.

“When we accept the shrugging nonchalance of fossil fuel companies and corporate polluters who insist that their emissions are just a necessary part of doing business, we’re not ‘creating jobs’ or ‘supporting economies.’ We’re chipping away at the health and resilience of our people.” - Jeff Turentine, NRDC

Climate, environment, housing, and systematic limitations all influence one’s relationship with the virus; it is extremely critical to acknowledge these structural inequalities when noting why certain groups of people are suffering in a manner that might be foreign to other groups of people. Recognize your privilege, but most importantly, recognize how the government is harming marginalized communities. Environmental injustice is a silent killer.