White privilege is waking up every morning happy to start a new day, while black people wake up scared and unsure if they will make it home that night. 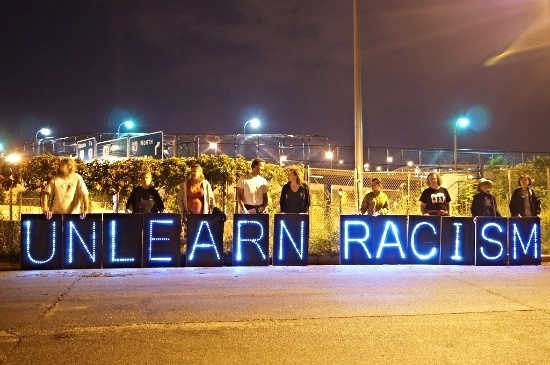 In times of uncertainty, when the world around you is chaotic and you’re just lost trying to figure out how to cope with it all, you think about what life used to be like. You think about who you used to be. You think about sweet memories. America used to be the home of the brave and land of the free. America used to be the beacon of light that attracted immigrants in hopes of new opportunities and a better life. America used to be a country others looked up to and the American dream was once real. Except, the truth is: America was never that place. Those sweet memories were a mask over the injustices that have been occurring since our founding. Now, 400 years later, isn't it appalling to believe that, as citizens of this once surreal country, we still see differences in the values of dark and light skin? Isn’t it appalling that we repeat history time and time again because change is only a moment not a movement, because not enough people help combat the problem and after it has seemed to “die down,” it has been forgotten. Systemic Racism. School Shootings. Acts of Terrorism. When will we learn? Why is ending racism a conversation instead of a common goal?

White privilege. Wikipedia would tell you it means “societal privilege that benefits white people over non-white people in some societies, particularly if they are otherwise under the same social, political, or economic circumstances.” But, in reality, white privilege is waking up every morning happy to start a new day, while black people wake up scared and unsure if they will make it home that night. White privilege is being pulled over for speeding, given a ticket and then heading home, while black people are pulled over, asked to step out of the car because they “look dangerous,” and then killed inhumanely for absolutely no reason.

If you think there is no such thing as white privilege or non-black privilege, look around you. Stop and look at what has happened recently. A black man was murdered on the pavement with an officer’s knee on his neck for allegedly possessing counterfeit money. He was doing nothing illegal; however, he was still punished. The police still murdered him. If this were to happen to a white man, they would have checked the money and left him alone. White privilege isn’t limited to white people, though it is seen mostly in this manner. Instead, it is the systems in place that give most races benefits over black people.

In the town I live in, Asians have that privilege as we are the majority. I have to admit that I did not even realize that myself and although I am ashamed of my lack of awareness, what is more important is that I am working to make it right. Asians have white privilege in my town and in many towns because we don’t have to worry about our lives being ended by a cop. We don’t have to be worried about being accused of a crime due to our skin color. We have problems as a minority in America; however, they do not by any means match the suffering and injustice black people have experienced for so long.

At the heart of the movement against systemic racism is the abuse committed by law enforcement. People want justice and change, and I do too. While some police really do just use their authority for harm, not all stand by and watch. There are some police that are trying to do what’s right. Recently, in a video streamed many times on Instagram, a black man was talking to the cops who were saying “Thank you for being out here and being peaceful.” Here you can see that, in the first 1:15 of the video, the cops are trying to do what is right. However, they could be doing more. The trending phrase “ACAB” or All Cops Are Bastards doesn’t mean that individual cops are not capable of good. Instead, it highlights that our justice system is corrupt and beyond reform.

There is no clear cut line saying some cops are good some cops are bad, but all cops who choose to stand with the badge on their uniforms, despite whatever good they may be doing, are standing for the wrong ideals and that has to change. In addition, some are so angry that they don’t even see the truth of the situation. Another video on Twitter was posted in which two white women were spraying graffiti on a starbucks store, “trying to help fight for black lives matter.” What those women did not realize is the cops would think that the black protesters did it. Instead, they left without even trying to understand the gravity of the situation. The issue is not that black people are protesting violently—many if not all of them are exceptionally peaceful—but instead that the violence that is resulting is being blamed on them anyway. The issue is not that Target is being looted, but instead that people care more about that than the black lives being taken by those who are supposed to protect us. Until we all take the time to listen clearly, actually grasp the situation at the roots, there is no chance of further change and hope for the future.

Now with the discussion about what is happening, we must reflect and answer the question: how do we unlearn the racism that we haven’t been able to rid our minds of for over 400 years? It’s not enough to be not racist; you need to be anti-racist. You need to actively fight for justice, not just post on your story and think “oh well I did my part.” If you or a family member is struggling to see the reality of this situation follow these steps to unlearn racism:

1)  Watch videos of George Floyd’s painful death and many more videos of the actual injustice occurring. These may be hard to watch but seeing the extremism may be just what you need to realize that this is actually a problem. Additionally, watch educational videos as well, such as The Thirteenth on Netflix, or Trevor Noah's video on how to perceive the violent protests.

2) If the people you are talking to are first generation immigrants, remind them that they wouldn’t have been here if black people didn’t pave the way for them through the civil rights movement.

3) Really understand that all lives can’t matter until black lives do.

4) think about how you’ve been racist or a part of the problem, even without knowing it at the time.

5) Have those uncomfortable conversations because they are worth having. I understand this is hard—America was practically built off of the oppression and exhaustion of black people and slave labor but you have to try, and I mean really try, to follow those steps if you would like to see a light at the end of this tunnel. Don’t stop when anyone you see could benefit from these 5 steps. Show them. Speak to them. Let’s make change.

Now that we have talked about what you can do to stop being a part of the problem, let’s shine a light on what is being done, what the media so unfortunately is not documenting. In New Jersey, the police are marching with the protesters showing they accept the wrongdoing that has occurred and they will work to do better. Change is happening slowly but surely in NYC, LA, Philly, Chicago and everywhere in between, so let us keep this momentum going strong and not back down. If there is any time that we can all fight in unity, it is now. I heard this quote when I attended a protest this past weekend: “be happy that we are asking for you to understand and not avenging the years we have been suffering for.” We now must do our part to make sure this is the last time black lives won’t matter in history. Make calls. Sign petitions. Send emails. Attend protests. Demand justice. Most of all, do not back down.