Amidst the #MeToo revolution, McDonald's employees are demanding accountability and justice from the global franchise

Morgan Weir
and
September 24, 2020
in
Women's Rights
Courtesy of UPI 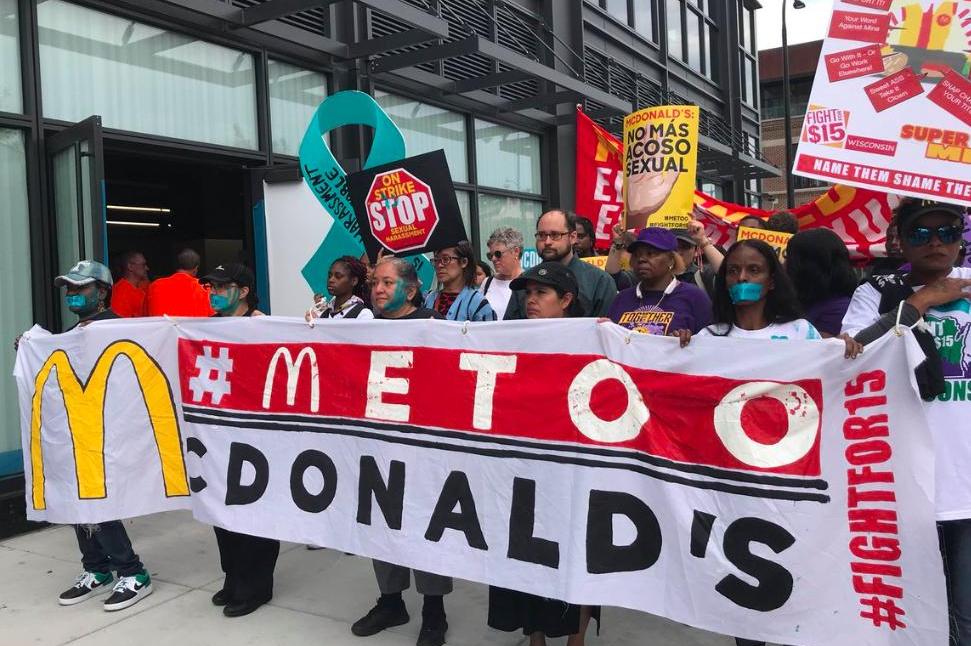 In 2017, the world became swept up in a movement against sexual harassment. #Metoo encouraged people to share their stories and speak out, empowering women—and men—across the globe. Over a year later, the movement is still thriving, but now people are demanding accountability from corporations in addition to celebrities.

On Tuesday May 21, the Time’s Up legal fund, the Fight for $15 movement, and the American Civil Liberties Union announced they would be partnering to assist 25 women who are filing charges against McDonald’s. 20 of these were filed with the Equal Opportunity Employment Commision, 3 were civil rights lawsuits, and 2 stem from previous charges.

After the announcement, employees protested outside in Chicago wearing red rain ponchos and holding signs that said, “McDonald’s: #MeToo” and “No More Sexual Harassment,” as they chanted, “Hey McDonald’s, we’re not loving it.”

The McDonald’s corporation is denying responsibility for the harassment. They have been claiming for years that, since most of the restaurants are franchises, the company can’t enforce policies and training, an unlikely sentiment coming from a corporation that dictates what kind of pickles each franchise uses and what pattern they put sauce in.

The McDonald’s CEO, Steve Easterbrook, says the company has been working to improve policies and incorporate training programs to address harassment, which they say over 90% of general managers and operators have taken. However, given that many claims of harassment took place during or after these changes, the effectiveness of McDonald’s strategies is debatable. It’s clear more needs to be done to uproot the deeply entrenched culture of misogyny and violence in these restaurants.

Employees and activists are demanding the company create a safe system for reporting sexual harassment cases, strengthen policies, mandate training, and create a committee of workers and representatives from corporate and franchises among other mechanisms to make McDonald’s a safer space.

In a capitalistic society, it is inevitable that wealth equals power. McDonald’s is such an economically strong company that this will be a test of how we react to and value human rights and women’s rights (particularly low wage, labor rights) and how corporate power plays into #MeToo.

This is not the first time allegations have come up against McDonald’s but is instead the third (and largest) wave of charges in the past few years. According to NPR, the recent allegations include “inappropriate touching, indecent exposure, lewd comments and requests for sex, as well as retaliation for reporting such conduct.”

In modern society, it is not uncommon for women to be punished for speaking out against powerful figures like managers. In fact, according to a study done by Hart Research, 40% of women in the fast food industry have faced harassment and 1 in 5 say they faced consequences such as having hours shortened, raises denied, or being fired.

The food industry has one of the highest rates of sexual harassment, and because the majority of women working these jobs have lower socio-economic status/influence, it becomes that much easier for us to turn our heads. However, if the people who gave so much attention to the mostly famous, wealthy harassment victims in the entertainment industry aren’t willing to do the same for low wage workers in the restaurant industry, then we have no business calling #MeToo a feminist movement.

The #MeToo movement was propelled by low income workers, those who have been ignored by society, courts, and consumers. Now, it is those same workers who are continuing the fight, putting their lives on the line, and demanding change. Let this serve as a warning to other restaurants and corporations that all women, regardless of power or wealth, will fight back. Time is up.