Election Hysteria: The Monster Amidst Our Lives, Especially on Social Media

With the election just a day away, election stress is a very real phenomenon - one that affects nearly 70% of Americans

Claire Corwin
and
November 2, 2020
in
Politics
Courtesy of Verywell Mind 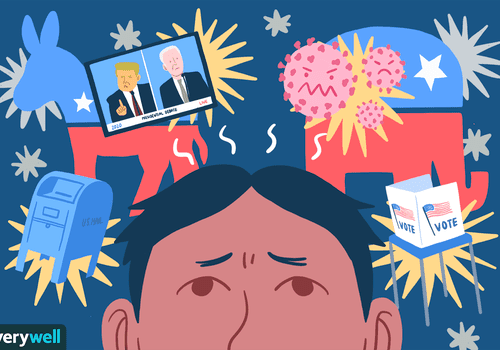 With the 2020 election a day away, millions of Americans are scrambling to the polls, or in these times, their local post office. To some Americans, the election is viewed as an event where they check a few boxes and go on with their day. But for more than 50% of Americans, it is a different story. According to CNBC, a recent survey from the American Psychological Association states that at least 68% of American adults have concurred that November 3, 2020, is heightening stress, anxiety, and other mental illnesses.

These days, it can seem as though everywhere you turn, something related to the election is blaring right at you. No matter if you see a racist conspiracy theorist on Twitter, a Biden yard sign, Make America Great Again flags, or a commercial reminding you to go out and vote, it is there and practically demanding you to do something about it.

If you are active on social media, you might agree that once you start scrolling, you are bound to come across dozens of posts regarding the election. Depending on your preferred political party and who you follow, every individual user will view different things. Regardless of whether your Instagram feed consists of pro-life posts, or AOC fan pages, it can sometimes feel like you are constantly surrounded by political establishments. Scrolling, but simultaneously being sucked into what feels like a tornado - the quadrennial election tornado.

On the bright side, social media is also used to educate. If you follow credible people and sources, you only hope that you are fed trusted information from trusted sources. Yet, as you think deeper about what is being posted- deep into the abyss of social media- it can feel as if the non-credible partisans of each candidate are screaming what they want into their phones mindlessly.

Now, it may seem like people should be taking it out on social media rather than chanting outside of their local CVS, but releasing something onto a social media platform is releasing it to the world. It opens up opinions to the vulnerable who may not know better than to follow what random people say online. Social media has caused the feeling of being brain-washed to become a reality, which may dismantle some people’s sense of security. This can turn people off when planning which candidate they want to vote for- influenced by external opinions instead of their own.

Undoubtedly, election information on internet platforms seems to sometimes fuel the fire inside your brain- the anxiety, depression, intrusive thoughts, and more. Although it may be scary, do not deny your feelings about this election- how you feel is valid. Everyone hears you and wholeheartedly understands your feelings during these unprecedented times.

Recently, life has been hard, and it sometimes seems nearly impossible to think of the bright side of anything. But when participating in the election, try to push away those negative thoughts so you feel more secure and more inclined to get out and vote. And if you fail in dismissing these thoughts, so be it, but do not let it interrupt your chance to make America how you want it to be.

To cope with election anxiety, an important thing to do is take a break from social media. Taking away social media is taking away constant information, which is a consequential stress reliever. Additionally, shifting your focus to other things, like reading, meditating, listening to music, or calling up a friend can take your mind off of the election mania to recognize the simpler things in life. Understanding the potential outcomes may put you at ease, and sometimes that is all you need.

Everything aside, make sure to create a plan to vote. You may hear this, possibly at least once a day, but voting will not only help shape America today, but it will also lead the path to a better America for years to come. Use your voice, cast your ballot, and shape your world.

What's Up With Biden's Tax Deal?