Tanishka Shah
and
October 2, 2021
in
Justice
Courtesy of @colorsofhoney 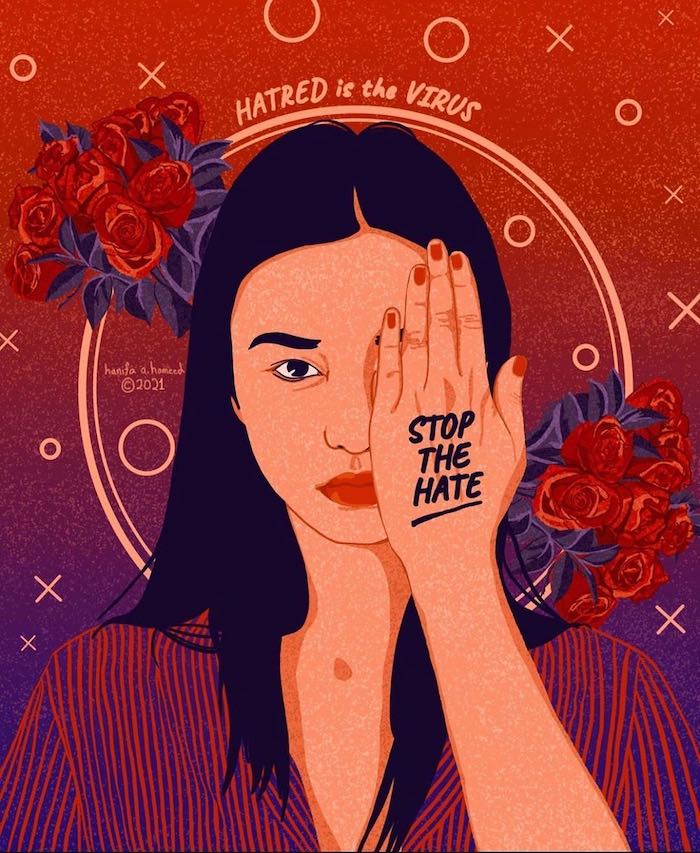 The past decade has seen a severe spike in hate crimes in the US as per the reports by the Federal Bureau of Investigation (FBI). According to their new report, there has been a 17% increase in hate crimes in the United States - the highest jump in more than a decade. The coronavirus has only infected us recently, but the virus of hatred has been affecting certain minority groups for decades. And while a biological virus affects us only physically, the virus of hatred tears a person emotionally and mentally making it extremely difficult for them to recover from it.

There were 7,175 hate crimes reported last year according to the annual Hate Crimes Statistics, out of which 59.6% of people were targeted for their race or ethnicity - something that’s not even in their control. Most of the reported incidents were racially motivated, and half of the attacks in this category targeted black people. While sexual orientation, gender identity, and gender bias were the other primary hate crime motives. Of all reported hate crimes, 36% were anti-Black or anti-African American, 10% were anti-white and 9% were anti-Jewish. The increase also accounts for the surge in reported hate crimes against Asian people as the national coalition Stop AAPI Hate received 9,081 reports of prejudice incidents against Asians and Pacific Islanders between March 19, 2020, and June 2021.

And this is only the official reported number, experts say that the actual number is even higher. Hate crimes are heinous discriminatory acts motivated by a bias against the victim’s religion, ethnicity, sexual orientation, race, gender identity, and many other factors. These acts are usually carried out to build fear among certain marginalized groups and are often violent acts of prejudice. Moreover, when an individual is targeted by hate crime, it affects the entire community making the marginalized group feel vulnerable.

For instance, the sudden rise in hate crimes reported against Asians was attributed in part to the scapegoating of the Asian community for the emergence of the COVID-19 virus, which is believed to have originated in China and which former President Trump called the “Chinese virus.” Due to this bias, many Asian people became victims to hate crimes when they were in no way involved in the emergence of the virus.

Other causes for hate crime include public and political discourse that may devalue members of unfamiliar groups, and offenders may feel threatened by demographic changes causing a disturbance in their livelihood or way of life. Offenders may be motivated by anger, fear, or ignorance instead of by hate. These can lead to the dehumanization of unfamiliar groups and cause targeted aggression.

In order to reduce hate crimes in the USA, the government sector and the citizens need to work together. The government shall take immediate, strong, public, and consistent actions to thoroughly investigate and prosecute violent crimes motivated by intolerance and prejudice. Moreover, penalties against any form of hate crime shall be enacted strictly by law so that the offenders are publicly made accountable for the hate crimes. Lastly, there should be necessary procedures, resources, and training provided to police and investigators in order to identify, investigate and register bias motives rightfully.

The citizen should immediately report any hate crimes that they experienced or witnessed so that fair action can be taken against them. Additionally, citizens shall also stay educated and informed about laws against hate crimes and shall help minority communities and civil society groups to reduce their fear and assist victims. Above all, international cooperation against hate crimes will go a long way in reducing hate crimes around the world.

In a statement, Attorney General Merrick Garland said that the Department of Justice’s top priority is preventing and responding to hate crimes. “These hate crimes and other bias-related incidents instill fear across entire communities and undermine the principles upon which our democracy stands," he said. “All people in this country should be able to live without fear of being attacked or harassed because of where they are from, what they look like, whom they love or how they worship.”

Have We Really Seen The End Of Colonialism?