Did He Really Say That? Yes, And Now He’s President: Brazil Under Bolsonaro

The president’s actions could only fan the flames of violence and corruption that he ostensibly set out to extinguish.

Jesse Roy
and
December 15, 2019
in
Politics
Courtesy of BBC News 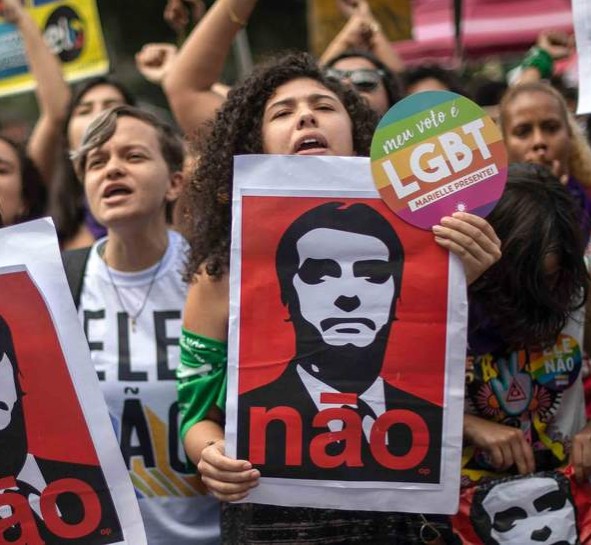 When Jair Bolsonaro entered the race for the Brazilian presidency, few believed he would advance far. For thirty years, he had remained on the fringes of politics, keeping his career afloat by sparking controversy—cursing out women lawmakers, rallying for the return of the country’s bloody military regime, and disparaging the LGBT+ community. Bolsonaro’s ultra-conservative philosophy is rooted in misogyny, racism, and homophobia—tenets that he did not sacrifice, but rather amplified, throughout his campaign.

This October, Bolsonaro captured fifty-five percent of the Brazilian vote. It was a victory that stunned, horrified, and thrilled a country that has become exceedingly polarized since the former army captain announced his candidacy. Initially running against the celebrated former president of Brazil, Luiz Inácio Lula da Silva, Bolsonaro at first had trouble gaining traction. But when Lula exited the race in late August after having been thrown behind bars for corruption charges, and was replaced by former mayor of São Paulo, Fernando Haddad, Bolsonaro’s support promptly rose.

How did Bolsonaro catapult himself from the periphery of Brazil’s congress, where only two of his bills made it into law after 27 years, to the presidency, where his broad powers will have ramifications not only for Brazil’s 200 million citizens, but for the whole world? One of Bolsonaro’s most resonant campaign promises was to root out Brazil’s deeply entrenched corruption. The government’s corrupt dealings culminated four years ago in Operation Carwash, a bombshell political scandal that has since enveloped hundreds of foreign and domestic corporations and politicians, including four former Brazilian presidents and seventy members of the National Congress.

Equally central to Bolsonaro’s campaign agenda has been his commitment to restore power to the police in a time of rampant drug-related violence. As an army captain in 1986, Bolsonaro wrote a magazine piece entitled “The Salaries Are Low,” an impassioned demand to the government for better military pay. As Bolsonaro’s favorite pistol-shaped hand gesture attests, law and order rhetoric has figured prominently in his campaign. Along with easier public access to guns, Bolsonaro has pledged to loosen regulations on police so that the detainment of criminals—as well as likely innocent citizens—is seamless. In a country whose homicide rate has risen steeply in the past decades--to more than three times that of the United States--such proposals have attracted voters whose lives are under threat by incessant crime and violence.

Often labeled the “Tropical Trump,” Bolsonaro has been compared to the United States president, who personally congratulated the Brazilian the day after his victory, later lauding him in a flurry of tweets. Besides their overlapping social views and prejudices, the two both share a fondness for antagonizing the press. Bolsonaro has added Trump’s go-to “fake news” to his arsenal of insults against the media. Tellingly, according to Brazilian press watchdogs like Abraji, physical and online threats against journalists have escalated since the beginning of the campaign, with the majority initiated by Bolsonaro supporters.

Like Trump, Bolsonaro also has authority over his country’s environmental policies--which, considering the sheer size of Brazil and its wealth of biodiversity, have an outsize effect on the world. The president-elect, who has claimed that Brazil’s environmental policies are “suffocating the country,” plans to open up as much of the Amazon rainforest as possible for logging and agriculture. Under Bolsonaro, penalties for violating environmental laws will likely be lightened, and Brazil’s continued membership in the Paris Climate Agreement is not guaranteed. As for the inhabitants of the Amazon, whose lands have undergone corporate intrusion for years, Bolsonaro has sworn to nullify all indigenous reserves, which he has likened to dots of smallpox.

The fate of Brazil seems exceptionally dark--for its minorities, its democratic institutions, its free press, and its environment. Still, the possibility remains that the 45% of Brazilians who voted against Bolsonaro will prevent him from destroying Brazil’s democracy, and that the country’s checks and balances will contain Bolsonaro’s worst impulses. Those who elected Bolsonaro, too, may switch sides, should the president’s actions only fan the flames of violence and corruption that he ostensibly set out to extinguish.