According to US News, Cuba is currently in the worst economic crisis since the fall of the Soviet Union in 1991.

Emilly Sanchez
and
August 12, 2021
in
Activism
Courtesy of Miami Herald 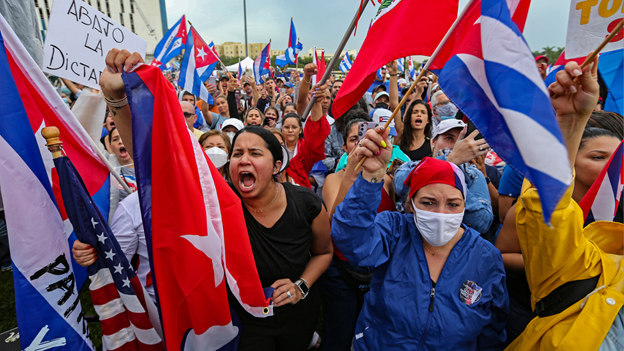 “Patria y vida”—motherland and life. The streets of Havana, Cuba and the rest of the nation, heard the chant of these words as thousands of Cubans united to form the largest protests in decades. From high food prices, medicine and vaccine shortages, to the ultimate collapse of the economy, Cuban citizens raid the streets with one goal in mind: attain freedom from the dictatorship they are under.

The motives for Cubans’ protests are far beyond food shortages and inflation. The restrictions imposed on citizens’ access to basic needs are just a piece of the larger puzzle that is driving them to demand freedom and liberty through unauthorized public protests and gatherings.

For over six decades, Cuba has been ruled by a communist government. The Cuban government has control over various aspects of citizens’ lives including their freedom of assembly, food prices, and wages.

According to US news, Cuba is currently in the worst economic crisis since the fall of the Soviet Union in 1991. Amidst the COVID-19 pandemic, citizens have not only faced the effects of the major ongoing public health concern but are currently struggling to deal with the economic collapse of the country’s oil import. Furthermore, the country is facing an approximate 500 percent inflation rate.

The oil import collapse is a result of the general foreign exchange shortage that emerged from the COVID-19 pandemic. Cuba imports an estimated 70 percent of its food and most of its medical supplies thus the exchange shortage has drastically impacted citizens’ access to these items. Many have to stand in long lines for hours during their search for food as most shelves in grocery stores are empty and the prices for available food items continue to rise.

Additionally, despite the surge of COVID-19 cases in the nation upon the advent of the COVID-19 Delta variant, Cuba declined the import of foreign vaccines via a World Health Organization initiative that would provide free or reduced-cost vaccines and instead resorted to creating its own vaccine.

The people of Cuba have become fed up with the various shortages pervading the nation, driving them to stand against the nature of the regime that has governed them for decades.

While many tried to broadcast the ongoing protests, Cuban authorities shut down internet services after videos of the protests went viral. Apart from the arresting of  journalists and protesters, officials responded to the protests with the use of rubber bullets and tear gas in an attempt to seize them. Journalists and activists continue to be targeted by security forces who are observing them outside their homes.

In a televised address on July 14, Cuban President Miguel Diaz-Canel did not show concern for making compromises with the citizens protesting. Diaz-Canel mostly blamed the United States for invoking resentment against the Cuban government into the protesters and called for “revolutionary” citizens to confront anti-government protesters. This call for action from the president against protesters only further fueled the drive of Cuban citizens.

The pressure placed on the communist government by Cuba’s citizens is at a never-seen-before level. Cubans have sought protection and a better life than the one their native country offers in other countries for years. In fact, under Fidel Castro’s rule, Castro urged Cubans to leave the country if they pleased. Now, with the complete absence of any Castro in power, these historic protests are a demonstration of a revolutionary will to find a better life within Cuba’s borders.