Savanna's Act and the Not Invisible Act, two bills addressing the tragic murder and trafficking of indigenous women, have finally been passed into law

Snayini Das
and
November 16, 2020
in
Justice
Courtesy of Ms. Magazine 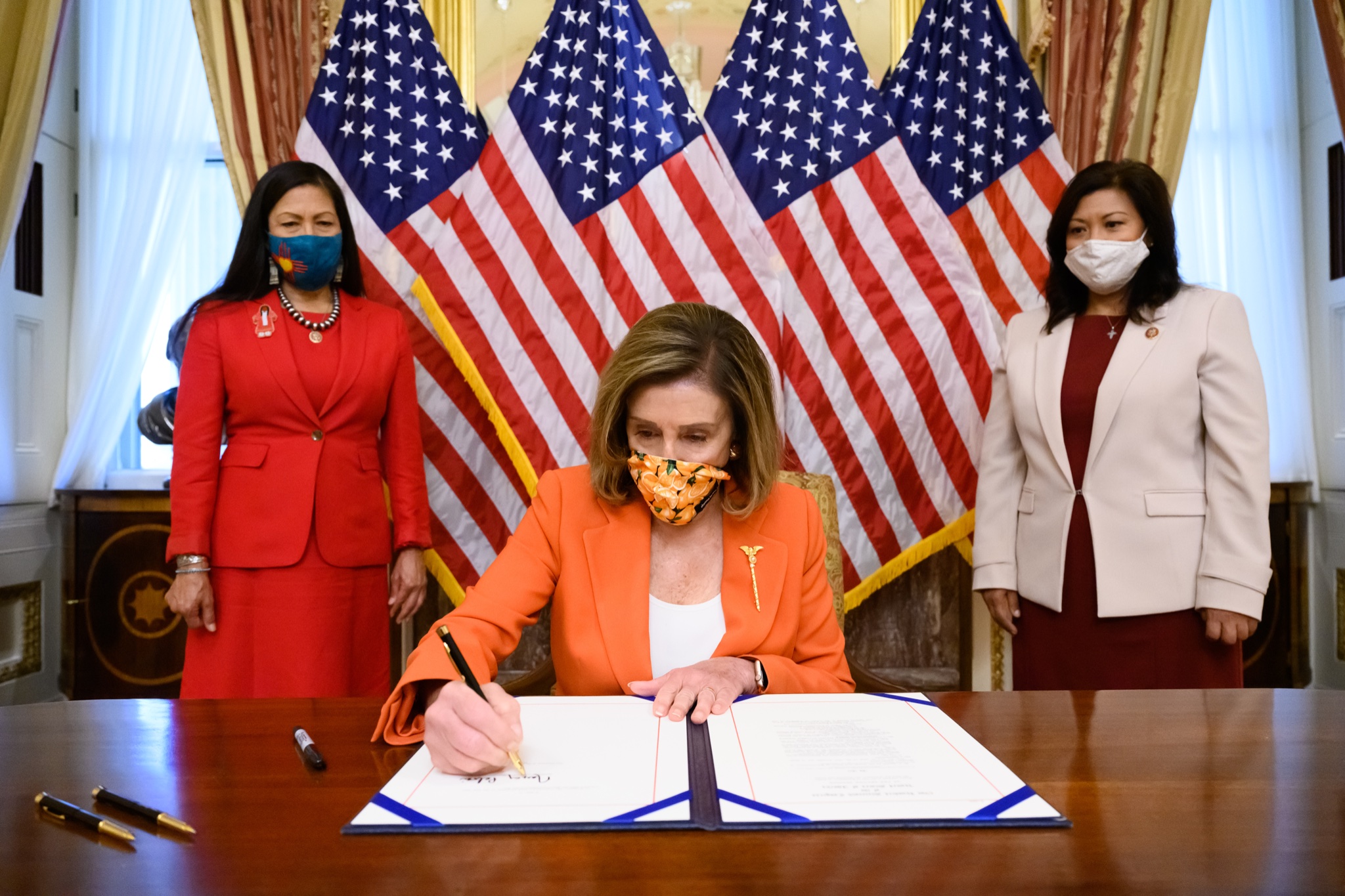 On October 11th, two bills—“Savanna’s Act” and the “Not Invisible Act,” addressing the ebullition of murdered, trafficked, and missing indigenous women were signed into law by President Trump. After far too many years, Congress finally passed the bills to address the rising cases of violence going on against indigenous women. This measure, authored by Sen. Lisa Murkowski and passed by the Senate in March, is a response to a horrifying, unexplainable crisis.

According to a report by the Urban Indian Health Institute in November of 2018, 506 indigenous women and young girls have been murdered or gone missing in 71 U.S. cities, including more than 330 cases since 2010. This number was actually an undercount due to the limitations of and total lack of data collected by law enforcement agencies. The National Institute of Justice reported that 84 percent of Native women experience violence in their lifetimes and 56 percent of them experience sexual violence. A shocking 97 percent of these women are victimized by non-Native perpetrators. Native American women are murdered at 10 times the national average. 95 percent of such cases are not even covered by the national media, which has resulted in circumstances where the cause of death is unknown.

In August of 2017, a young pregnant woman, Savanna LaFontaine-Greywind, was abducted and killed in Fargo, North Dakota. Savanna was one of the many Native women who went missing in that year. For years, the Coalition to Stop Violence against Native Women and the National Indigenous Women’s Resource Institute have been alerting people about incidents of indigenous women being murdered and going missing. The Sovereign Bodies Institute and the Urban Indian Health Institute, along with several organizations, have also raised the alarm about Missing and Murdered Indigenous Women and Girls (MMIWG).

Savanna’s Act is both an attempt to place attention on the issue and to understand how severe it is. Professor Sarah Deer, a member of the Muscogee (Creek) Nation of Oklahoma and expert on sexual violence against Native women, says, “This has been a year of real visibility for the issue of murdered and missing indigenous women. There has been more attention drawn to it. And that’s largely the result of activism on the issue from policy organizations, direct service people, grassroots activists, families (of victims) and survivors.” The new bill uplifts the coordination and data collection between tribal, local, state, and federal law enforcement in cases involving missing and murdered Native women. It also calls for new guidelines to respond to the cases, consulting with the tribes.

The Not Invisible Act, on the other hand, focuses on the violent cases of crime against Natives more broadly, for which an advisory committee, made up of tribal leaders, law enforcement officers, families of victims, and survivors of violence is needed to be formed. The committee’s main tasks include making recommendations to the Department of Justice and suggesting ways to combat violence against Native Americans to the Department of the Interior.

Professor Sarah Deer has added, “It’s been a whirlwind of visibility. A perfect storm, in a good way.” She testified on the bills before the Congress last April and said, “What both of these bills will do is get everyone at the same table at the same time. That has been much harder than you think.” The bills require coordination among the three federal agencies which have the responsibility of countering the crimes against Native Americans—the Department of Justice, the Department of Interior, and the Department of Health and Human Services.

Senator Murkowski came in support of the bill following the criticism hurled at her when she excluded Native Alaskans from a law allowing tribal courts to prosecute domestic violence committed by non-Natives. After the incident, there has been a reverse in her position and she has been working to regain the trust and faith of Native Alaskans.

Savanna’s Act was very close to being passed as a law in 2018, passing the Senate with unanimous consent but former Republican representative, Bob Goodlatte of Massachusetts, single-handedly prevented the bill from getting a House vote due to “petty partisan games.” Former Senate Heidi Heitkamp, who was originally the author of the bill but lost re-election that year, spent her final weeks in the Senate publicly shaming Goodlatte for letting the legislation go down.

The new laws are a result of the efforts of Deb Haaland, a Laguna Pueblo woman from New Mexico, and Sharice Davids, a member of the Ho-Chunk Nation from Kansas, who joined the U.S. House of Representatives in 2019 as the first Native American woman ever to serve in Congress. They prioritized the passing of legislation to address MMIWG. In 2019, when Reps. Haaland and Davids arrived in Congress, they immediately took up the fight. They co-sponsored the Not Invisible Act with Republican Representatives Tom Cole (La.) and Markwayne Mullin (Okla.), making it the first bill to be introduced by four enrolled members of federally recognized tribes—the Pueblo of Laguna, the Ho-Chunk Nation of Wisconsin, the Chickasaw Nation of Oklahoma, and the Cherokee Nation. In the Senate, Sens. Lisa Murkowski (R-Alaska) and Catherine Cortez Masto (D-Nev.) reintroduced Savanna’s Act.

Even though Trump signed both bills on the 11th, he has a complex and difficult relationship with Native Americans, at times using slurs as political insults—for example, his repeated use of the racial slur “Pocahontas” to refer to Senator Elizabeth Warren.

Senate Catherine Cortez Masto said in a conversation with MS Magazine, “Today’s signing puts us on a path towards greater justice for thousands of Native women and girls that have been missing, trafficked or taken far too soon and puts into place the tools needed to give our Native sisters, mothers and daughters greater security. No longer will these women be invisible, and may the memory of Savanna LaFontaine-Greywind live on in the law that bears her name.”