Can You Support Gay Rights and Still Be Friends With George W. Bush?

Ellen’s take on the debate paints George W. Bush as a person who simply has differing opinions. It effectively waters down the harmfulness of the policies he implemented in his eight years of office. 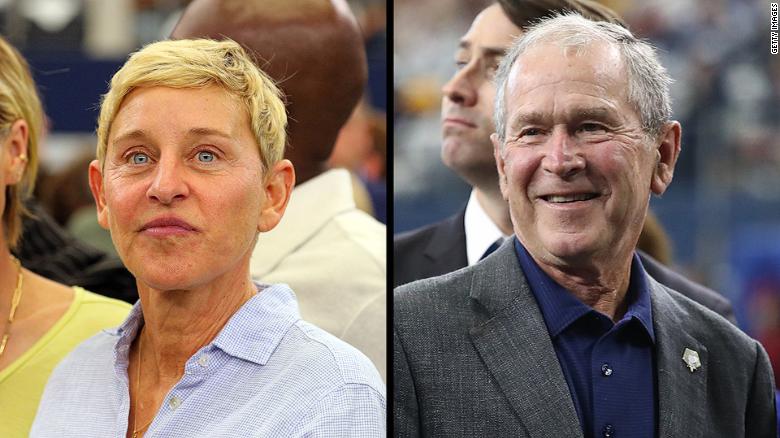 A picture of Ellen DeGeneres and her wife, actress Portia de Rossi, socializing with former President George W. Bush at a Dallas Cowboys game recently went viral on Twitter, causing many to wonder if she is truly the LGBTQ proponent she claims.

Ellen is an LGBTQ+ icon. Starting from the moment she publicly came out two decades ago, Ellen has elevated LGBTQ+ issues on her talk show and was even awarded the Presidential Medal of Freedom, the United States’ highest civilian honor, for her contribution to society. Ellen’s legacy of activism and charity, especially for the community she is part of, puts her directly at odds with Bush’s past actions. Bush’s presidency, in contrast, was consistently hostile toward the LGBTQ+ community. He opposed same-sex marriage on numerous occasions while actively opposing a bill that broadened hate crime laws to include attacks on sexual orientation, gender identity, or mental or physical disability.

Besides his failure to support the LGBTQ+ community, Bush led his administration in the widely-criticized Iraq War, otherwise known as the “war of choice.” The US and its allies overthrew the dictatorship in Iraq, but also greatly destabilized the region. As a result, an average of 120 Iraqis died every day during the summer of 2006. During this war, Bush’s administration used inhumane techniques such as waterboarding, subjecting their victims to extreme amounts of pain and discomfort. In addition, a war tribunal found Bush and seven others guilty of war crimes committed in Iraq and Afghanistan.

The president was also criticized for his slow response to the disastrous Hurricane Katrina. Katrina hit when the president was on vacation — a vacation he had been on for 27 days. Two days later, Bush finally returned to the White House, but to little effect. The federal, state, and local governments ultimately had a weak response to the disaster, including not ordering evacuations before the hurricane.

The backlash to the two hanging out was immense. Ellen’s public values of inclusion and advocacy directly contradict Bush’s legacy of hatred and cruelty toward the LGBTQ+ community as well as people in general. His administration eroded human rights, while Ellen promotes them.

Ellen responded to the controversy by depicting the issue as criticism about her mingling with people of “differing opinions,” not one in which she seemingly supports a person who has committed war atrocities and perpetuated discrimination against LGBTQ+ Americans. Even more damning is the public support for her by celebrities such as Kristin Bell, Kendall Jenner, and Reese Witherspoon — all celebrities that purportedly support the LGBTQ+ community. By reducing the controversy to a matter of differing opinions, she reduces Bush’s past animosity to LGBTQ+ Americans into something as trivial as disagreeing with someone over a sports team.

Ellen becoming friends with George W. Bush raises many points. For one, the positive reactions from celebrities showcase the widening gap between the celebrities and the “common” people. The wealthy were not as affected by George W. Bush’s harmful policies as others were: they did not suffer in Katrina nor did they feel the harshness of war as US Army personnel do, nor did straight celebrities suffer from the consequential prejudice that Bush endorsed.

Ellen’s take on the debate paints George W. Bush as a person whose simply has differing opinions. It effectively waters down the harmfulness of the policies he implemented in his eight years of office. George W. Bush might be Ellen’s friend, but he was not a friend to the LGBTQ+ community when he was in the most powerful office in the world. And that’s something that many of us cannot forgive.