Photos of the Amazon burning spread like wildfire on social media, but they are indicative of a bigger story about Jair Bolsonaro’s hatred for the Amazon and its people. 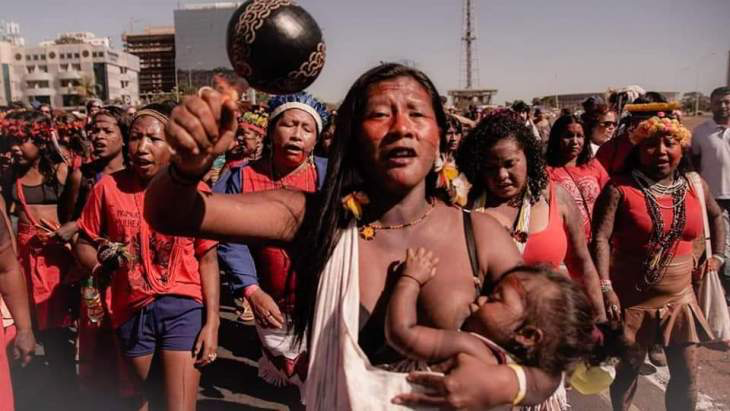 Photos of the Amazon burning spread like wildfire on social media, but they are indicative of a bigger story about Jair Bolsonaro’s hatred for the Amazon and its people.

Brazilians elected Bolsonaro as President largely because of his populist rhetoric and economic liberalism. When it comes to the Amazon, however, he has vocally merged the two, proclaiming that indigenous reserves, which are protected lands, hold back the rainforest’s rich opportunities. In his eyes, businesses, not natives, deserve control over these economically valuable areas.

Bolsonaro’s distaste for indigenous Brazilians is not a political facade, but a true feeling of ethnic superiority. He has lamented that people with a different, “inferior” language and culture block development of the Amazon, even complaining: “it’s a shame that the Brazilian cavalry hasn’t been as efficient as the Americans, who exterminated the Indians."

During the election, he promoted the idea that indigenous people cheated Brazilians out of development and wealth, then promised to “fix” the problem. Recently, Bolsonaro made good on his word and transferred control of native land to the Agriculture Ministry. The conflict of interest he has created is not hard to see. The Ministry’s goal is to assist local farmers and ranchers, the people who most frequently start the fires to free land for agriculture, so there’s no incentive to protect the Amazon. That’s why the number of blazes increased by 84% this year.

Technically, these fires are not legal, but Bolsonaro promised to open the Amazon and implied that the government would turn a blind eye to any encroachment into the rainforest. Native land invasions by mining and agricultural companies spikedsince the President took office, but the administration remained silent. Rather than address the issue, it chose to pin blame for the fires on non-governmental organizations.

To silence calls for change, the systematic disenfranchisement of indigenous Brazilians began. Brazil’s agency for indigenous affairs, FUNAI, “oversees health care, housing, and language preservation for indigenous groups.”Previously, it was tasked with demarcating native land and overseeing environmental licensing on indigenous territory, which protected the areas from the worst of the mining and logging companies. Bolsonaro never supported this system, writing that he refused to get “into this nonsense of defending land for Indians [when] indigenous reserves are an obstacle to agribusiness.”On his first day in office, his administration stripped FUNAI of its demarcating and licensing rights, then transferred it from the Justice Ministry to the Ministry for Family, Women, and Human Rights, where it has less autonomy.

Native Brazilians now have no avenues of complaint as they lose their rights. Faced with an uncaring government and empowered corporations, they’ve chosen to fight for visibility--and women are at the forefront.

Last month, 300 women gathered in Brazil’s health ministry to protest changes to the healthcare system for native peoples, which they say will place a burden on local governments and reduce the available resources. Between calls for a meeting with Health Minister Luiz Henrique Mandetta and centralization of the current system, the women sang and danced to traditional music to make themselves heard.

They left ten hours later with the promise of a meeting and joined a group of 1500 who were in Brasilia, the capital, for the women-led Indigenous Women’s March. Over 110 different ethnic indigenous groups united in a call for the protection of the Amazon as they paraded through the streets.

As of yet, Brazilian leadership has not acknowledged the demands of Brazilian women. It’s not likely that they will, but indigenous women and communities refuse to be silenced and continue to fight for their rights. It’s beyond time we listened.