The real Kazakhstan is a beautiful country with a modern, proud society — the opposite of Borat's version

Luodi Wang
and
November 30, 2020
in
World
Courtesy of CBS News 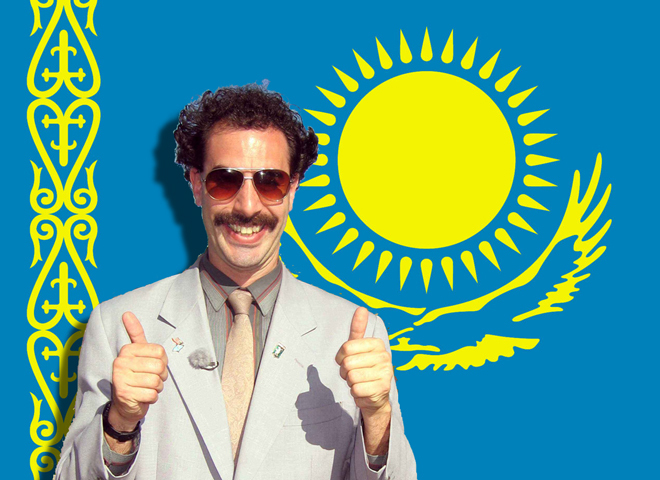 Cliches of “deja vu” or “kumbaya” come up when we realize the striking similarities a film portrays about a specific culture, nationality, or ethnicity. But who exactly are we thinking of when a more-than-famous, widely circulated, and talked about movie painting a reprehensible image of a little-known country appears in the frontlines of every chyron on every mainstream media?

With 196 sovereign nations in the world, there are inevitably some countries more obscure than others. The reality of Kazakhstan, an oil-rich presidential republic in Central Asia, proves the film ‘Borat’ and its recently-released sequel as strictly satirical, and its depiction of the nation should be taken with a grain-  perhaps a whole silo of salt.

In both 2006’s ‘Borat’ and ‘Borat 2’, released on October 23rd, the title character is an exaggeratedly misogynistic and anti-Semitic figure, though his behavior is comedically explained as the standard in his home nation of Kazakhstan. The films are comedic, satirical works, using Borat’s staunchly bigoted characterization to portray cultural conflict with the United States- but more so, to expose the casual acceptance and even support of many of Borat’s exaggerated misogynistic and anti-semitic ideals in much of America today.

The movies are not meant to attack Kazakhstan, and rather use the country as an arbitrary plot device to fuel the true purpose of the narrative- exposing the U.S. for the discomforting mindsets of many of its people, even in the 21st century. The actor and creator behind the movies, Sacha Baron Cohen, has stated, “I chose Kazakhstan because it was a place that almost nobody in the U.S. knew anything about, which allowed us to create a wild, comedic, fake world. The real Kazakhstan is a beautiful country with a modern, proud society — the opposite of Borat's version.” ‍

Nonetheless, with the recent release of the second Borat movie, there is perhaps no better time to learn about the real Kazakhstan, which has recently embraced the misguided attention given to it in the interest of growing its own tourism industry.

Composed of fascinating and contrasting landscapes, from the deserts and steppes to dense forests and high mountains, Kazakhstan is south of Russia, west of China, and north of Uzbekistan, and borders both Kyrgyzstan and Turkmenistan. A champion of environmental protection, Kazakhstan has hundreds of nature reserves and national parks, and is famous for its stunning mountains, lakes, and deserts. It's also the ninth-largest country in the world by area, with a population of just over 18 million. It’s occupied by modern, opulent cities often compared to Europe’s, thanks to their wide, leafy boulevards, with symbolic monuments lining the streets of its capital. A member of the Soviet Union since 1925, it didn't gain its independence until 1991, the last Soviet republic to do so. Kazakhstan has a highly diverse population, composed of many ethnic groups: the largest are the Kazakh people, the Asiatic Turks, a mix of Turkic tribes and Mongols that were once Genghis Khan descendent nomads roaming the region, and Russians, who first arrived in the 19th century. The "strong separation" between Russian and Kazakh-speaking regions of the country is much like the division between French- and Netherlandic Belgium.

‘Borat’ received much criticism for its portrayal of the Roma people, a nomadic ethnic group of which there are fewer than 7,000 in Kazakhstan, said to be reinforcing dangerous stereotypes against an already marginalized group. While the film did depict certain groups as lesser, it was in a purely satirical fashion, intended to ‘punch up’ and use these as plot devices to build a mocking representation of the character as he interacted with the ‘heartland’ of the United States.
Kazakhstan’s former President, Nur-Sultan Nazerbayev, is a respected figure on the global stage. More popular than Genghis Khan or Hannibal, Nazerbayev was a national godsend among his native Kazakh people, winning presidential elections by 98% for many terms, remaining in power for three decades until his resignation in 2019.

However, though the former leader has been acclaimed for his record of maintaining stability and ethnic peace in the nation since its independence in 1991, as well as his willing denuclearization and modernization of the oil industry, he has been condemned for his consolidation of power and his development of Kazakhstan into a one-party state, with neither free nor fair elections.

Now free of Soviet Communist shackles and a Marxist-Lenist economy, Kazakhstan is a country steadily becoming a political and economical powerhouse in an oil-driven global economy. Former US First Lady and presidential candidate Hillary Clinton has praised Kazakhstan for making great strides in freedom, unity, stability, and prosperity in recent years, though it has been internationally condemned for its lack of free and fair elections and its consolidation of power in the presidential office.

Kazakhstan’s stunning natural beauty has gained international acclaim. While the country has not had a very large impact on the rest of the world in recent history, its largest claim to fame beyond ‘Borat’ may be its place as the country which hosted and launched the first man into space, Yuri Gagarin, in 1961.

In such a beautiful country, I’m sure many (myself included) would fancy a visit or a permanent stay here in Kazakhstan, already a popular destination for expatriates.

While the ‘Borat’ movies may be chart-topping comedies, it’s important to recognize its portrayal of Kazakhstan as solely fictitious, and take this opportunity to learn about a country you may have never given a second glance.