Emilly Sanchez
and
August 21, 2021
in
Politics
Courtesy of The Texan 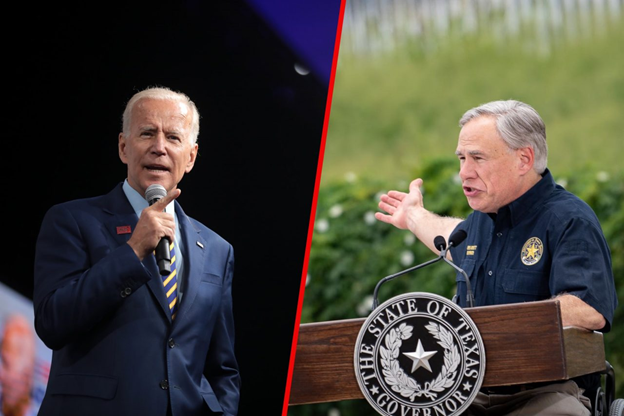 The Biden administration recently sued Texas over Republican Gov. Greg Abbott’s plan to restrict the transportation of migrants released from US Customs and Border Protection custody.

The friction between Gov. Abbott and President Biden goes way back to Abbott’s refusal to acknowledge President Biden’s victory in the 2020 presidential election. Immigration policies, specifically, is one of the matters that reflects the lack of concordance between Abbott and the Biden administration. Under Biden, an increase in migrants entering the U.S has become evident. While the President has acknowledged this increase as a result of his efforts towards building a more “humane” immigration system, Abbott views the surge of immigrants arriving at the border as empowerment of drug cartels in Mexico, profiting from the smuggling of immigrants. The Texas governor continues to enforce policies intended for the arresting of migrants despite the opposition of the Biden administration. In fact, since January of this year, Texas has filed a total of five lawsuits against the Biden administration’s attempts to challenge Abbott’s efforts of limiting immigration. This lawsuit is the latest escalation of their differing views on immigration policies.

The executive order issued by the Texas governor granted the Texas Department of Public Safety (DPS) power to seize private vehicles “upon reasonable suspicion” from transporting recently released migrants. The order takes aim at private organizations arranging migrants’ transportation in partnership with the federal government. Abbott framed the order as a response to a spike in COVID-19 cases, claiming the increasing cases were linked to a rise in border crossings.

Gov. Abbott claims the order “will reduce the risk of COVID-19 exposure in our communities.” However, his choice to use the COVID-19 public health concern as reasoning for the new border enforcement became questionable when compared to his persistent reluctance to issue mask mandates in the state of Texas.

In a letter to Abbott, less than 24 hours after the order issuing, Attorney General Merrick Garland declared the directive as unconstitutional as it “violates federal law in numerous respects, and Texas cannot lawfully enforce the Executive Order against any federal official or private parties working with the United States.”

Garland emphasized the Department of Justice’s willingness to pursue the necessary legal action to reverse the effects of the order were Gov. Abbott not to rescind the directive. Abbott’s response to Garland’s letter depicted the Biden administration as responsible for not only the rising COVID-19 cases among migrants but the general jeopardizing of citizens’ health in the U.S. The Texas governor did not defend the constitutionality of the new order and instead claimed the ongoing border crisis is misunderstood by the Biden administration and entirely a creation of their failed immigration policies.

Despite Abbott’s claims, his order is actually believed to potentially exacerbate the spread of COVID-19 among migrants. Dr. Michele Heisler, the medical director at Physicians for Human Rights, released a statement declaring that Abbott’s order would lead to migrants being held in detention centers where social distancing may be limited, thus increasing their vulnerability to the virus.

Ultimately, the Department of Justice opted to file an emergency request for an order to halt Abbott’s plan and block the order enforcement. The lawsuit filed in the U.S District Court in Texas noted the expected confrontations between the DPS and federal personnel—contractors, partners moving non-citizens— as declared by the Biden administration.

Advocates of the immigrant community did not refrain from emphasizing the xenophobia behind Gov. Abbotts’ executive order. Kate Huddleston, an attorney with American Civil Liberties Union, touched on the prospect of state troopers racially profiling passengers as a result of the order in a recent statement: “The governor’s order will lead to racial profiling and over-policing — with state troopers pulling over cars and buses without lawful justification, profiling passengers, and questioning people about their immigration status.”

The executive order issued by the Texas governor is simply just another anti-immigrant policy targeting border communities in disguise.

Abbott’s response to the lawsuit upon him simply deemed the Biden administration responsible for the current constitutional crisis between the U.S government and the state of Texas. Whether the incentive for the new restrictive order is truly to reduce the COVID-19 spread or a mere pretext, the threat posed to border communities is undeniable. If Abbott’s proclaimed anti-immigration views don’t already incite enough discrimination against the immigrant community in Texas, the policy will certainly empower it.