The deportation of thousands of Haitian immigrants is a painful reminder of the persistent intolerance of the American immigration system, one that should be predicated on compassion and empathy.

Kendall Carll
and
October 5, 2021
in
Immigration
Courtesy of the New York Times 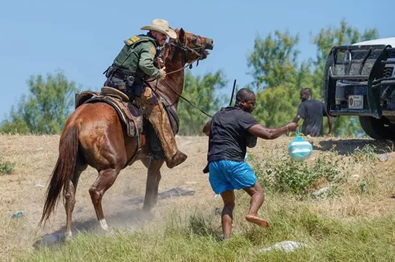 A bridge in Del Rio, Texas has become a refuge point for an estimated 10,000 migrants, the vast majority of which are Haitan. In response to the surge of migration efforts along the southern U.S. border, Immigration and Customs Enforcement (ICE) is gearing up to commence significant deportation efforts. This comes after the Biden administration made the initial decision to pause deportation flights in the wake of devastating natural disasters in Haiti. NBC reports that within the week, ICE expects to carry out eight individual deportation flights before proceeding to “increase that number to 10 per week.” ICE also plans to begin “lateral flights,” moving Haitan migrants to “other sectors of the U.S. border for processing in order to alleviate overcrowding in Del Rio.” For context, the Department of Homeland Security says that a single deportation flight can hold 135 individuals.

This seemingly sudden wave of migration has an evident proximate cause. On August 14, Haiti experienced a 7.2 magnitude earthquake that leveled infrastructure and devastated the country. With still increasing numbers, roughly 10,00 people were injured with a death toll of 1,941. According to UNICEF, the earthquake has impacted 1.2 million Haitans, including 540,000 children, and destroyed more than 84,000 houses. Two days later, rescue efforts were hindered by waves of torrential rain and heavy winds coming from Tropical Storm Grace. Bruno Maes, UNICEF’s representative in Haiti, explained that “countless Haitian families who have lost everything due to the earthquake are now living literally with their feet in the water due to the flooding.” The destructive powers of these natural disasters only compound the difficulties Haiti was already facing—“gang violence, the assassination of its president, Jovenel Moïse, and the Covid-19 pandemic.”

Humanitarian efforts have been outpouring, but current efforts are still failing. Aid group Save the Children reports people living on the street as buildings collapse frequently and without warning. A body of a 3-year-old girl was uncovered near a flattened building, left sitting in the rain before the police would arrive. Health care facilities are facing critical shortages of supplies and staff.

Homeland Security officials have explained that many Haitans are not coming from the island itself, but various South American countries where they have been living for years. Problematically, this means that deportation efforts will not return the migrants to their homes and families, but to a country in the midst of a humanitarian crisis where they have not been for years. Of course, the situation has brought heavy criticism of the Biden administration, with Texas Senator Ted Cruz accusing the administration of embracing a policy of open borders. However, Cruz  failed to elaborate on exactly how temporary adjustments in border procedures in response to a humanitarian catastrophe exactly constitutes an open-border policy. But even then, perhaps that is a relative preference to the United States past four years of migrant rejection and maltreatment.

While there is a legitimate discussion to be had about U.S. border policy and the country's obligation to assist in crises like those in Haiti, there are certainly parts of the approach taken by localized law enforcement. Most notably was the footage that emerged of “Border Patrol agents on horseback aggressively dispersing Haitan migrants.” The video depicts agents on the southern border pushing back migrants, threatening them atop their horses. It is a painful reminder of the persistent intolerance of the American immigration system, one that should be predicated on compassion and empathy. In the midst of intense policy debates, we would do good to not lose sight of the idealized America, one that graciously accepts and cares for disadvantaged populations.