Anti-homeless architecture is the sort of cruelty that is thought of, designed, confirmed, funded and built to harass and exclude those unfortunate enough to not have homes of their own

Anushri Dwivedi
and
March 29, 2021
in
Justice
Courtesy of The Guardian 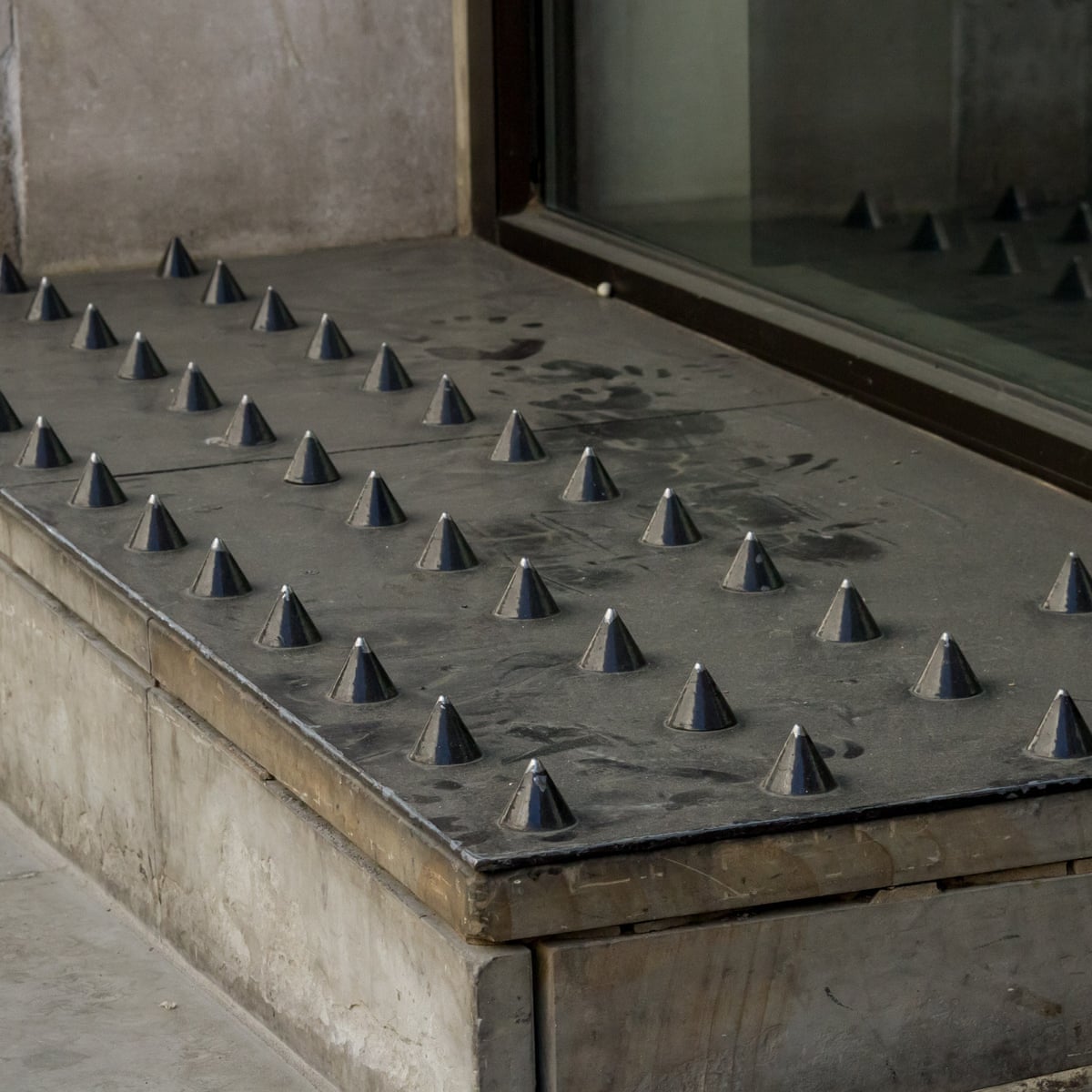 “Hostile” architecture is designed to deter homeless people from sleeping or living on public property. Such measures include spikes, metal bars, cement boulders and unnecessary sprinklers, many of which are often disguised as art. Specifically, pavement sprinklers intentionally spray the homeless, thereby soaking them and their possessions. Similarly, spikes on ledges are placed to prevent homeless people from sitting on them and on doorways to prevent standing or sleeping. The message is quite clear: public spaces are solely for those who own, reside or work in them, even when not in use, and outsiders are not welcome. The “criteria” for this type of architecture can be as subtle as refusing the public a place to sit or a wall or fence aimed at keeping people and animals out. On the other hand, this architecture can be as aggressive as the metal spikes mentioned earlier that go unnoticed in bustling busy cityscapes. They are considered to be protective measures for the business owners residing in city suburbs and central urban areas, but is it really protective? As architectural historian Jon Ritter told the New York Times, “what is hostile to some is defensive to others.”

Proponents claim that hostile architecture is “necessary to help maintain order, ensure safety and curb unwanted behavior such as loitering, sleeping or skateboarding.” Similarly, in 2015, Alex Andreou discovered just how destructive this architecture is after experiencing homelessness himself. He found that measures such as spikes outside residential complexes go largely unnoticed and that while it may be hard to picture yourself in the shoes of the homeless, it can happen to anyone. Alex went from a six-figure income to living on the streets in the span of just one year, after having experienced an economic crisis, a family death, a sudden break up and breakdown. When he looked for shelter, the city’s cruelty became apparent. There were constant removals of the only places the homeless had for shelter and rest which led to a larger issue: these “protective” measures do not and cannot distinguish the homeless people’s value as less deserving than others. Additionally, by making the city less accepting of its human socioeconomic composition, it becomes less welcoming to all humans, resulting in feelings of hostility that extend to the humans who live there.

Additionally, defensive or protective architecture is not the product of accidents or thoughtlessness, but rather a thought-out process predicated on exclusion. It is the sort of cruelty that is thought of, designed, confirmed, funded and built to harass and exclude those unfortunate enough to have homes of their own and reveals how corporate hygiene has come to override many human considerations.

Furthermore, the politics of public space become very apparent as “the very economic and political revolutions that freed people from autocratic monarchies also enshrined principles of private property at the expense of a long tradition of common land.” Putting spikes up does not address the issues of inequality and poverty prevalent in urban areas; rather, it allows these issues to disappear from your direct line of vision so you don’t have to face them. Predictably, urban landscapes have become “victim-blaming battlegrounds.”

Here are some examples of anti-homeless architecture:

In 2018, Hippolyte (a man who decided to act as if he was sleeping on a bench to show the metal bars were designed to prevent the homeless from sleeping there) was accused of stealing metal arches from benches in Lyon, France. These metal arches represent yet another form of anti-homeless architecture as they prevent the homeless from sleeping on the benches at night. He wanted to display to the world and other French citizens that despite how far France has come to address its many social issues, it is still a country where people can be without a home, even though there are many empty buildings that surround city squares. For some insight, Euro News reports that 4 million people currently live without decent homes in France. Hippolyte claimed his charges were “anti-democratic” as he was accused of stealing property when he was simply trying to protest in light of these barbaric infringements on homeless living.

As of 2019, these hostile designs became widespread in New York City as well. They were claimed to serve the purpose of maintaining order and protecting public safety but in reality, public safety, while still important, isn’t the dominant issue at hand. There was increasing backlash from critics claiming these measures disproportionately targeted vulnerable populations and deemed them unnecessary. In all of the 79,000 homeless in New York, 5% of them are believed to live on the streets. New York’s privately owned public spaces, as per state regulations  are required to be open to the public. In 2007, the city prohibited measures to prevent seating, but armrests in the middle of benches still remained. Since 2017, however, the city rightfully required frequent inspections of privately owned public property and 193 were cited for violations including doormen who shooed people away, sealed-off seating behind locked fences and gates, and lack of seating in public spaces. Once more, the reasoning for these measures was that the property would be “damaged” or that public safety is ensured through the anti-homeless measures.

Public safety is definitely of concern, and critics have reason in saying that architecture is not designed to discriminate against the homeless, often, the reduction in areas for the homeless to rest is an unfortunate by-product.  One critic, James Furzer, believes that “A bench isn't somewhere to sleep. But if we're excluding (the homeless) from sleeping on benches, then we need to include them somewhere else. We need to start designing our cityscapes with some sort of inclusive, secure areas. We just need somewhere they can get the security -- somewhere they can take themselves away from the prying eyes of the public. That must be so condemning, being stared at all day. Architecture isn't going to solve the issue, but it can provide some sort of temporary solution just to give them some sense of well-being.” This indicates that architecture is not a long-term solution; eventually more affordable housing and homeless shelters will be created, however, any architecture built now sadly will discourage the homeless from sleeping there.

In light of the detrimental anti-homeless measures persisting in various urban areas, reformers are actively working to acknowledge the issue, build empathy for the homeless, and foster solutions for a better connected society. For example, sculptor Fabian Brunsing chose to bring a satirical eye to the issue and created the “pay bench,” an art installation of a park bench retracting metal spikes for a limited time when an approaching passerby would feed it a coin to sit there. The message was that “if you can pay for it, you can sit.”

Additionally, the Syriza government in Greece recently removed the metal barriers once placed separating the parliament and public square. As predicted, the effect on Athenian society represented the strife experienced by citizens over the last few years; citizens found that “the city was magical and breathed a sigh of relief.” This embodied the government's “we are the people” message and contributed to unity within the nation.

Lastly, the power of art, journalism and academics helped a group of people neutralize this issue in London. They laid down a mattress and bookshelf stocked with books on the housing crisis, gentrification, poverty, inequality and other unaddressed issues to protest against vicious metal spikes on London’s Curtain Road. They had discovered that in the 1990s, London was an epicenter for art in all its forms; the people residing there eventually emerged as tastemakers in the arts, leading this group of friends to use their passion for the arts to spread awareness. Their ultimate goals are to talk with those allowing the implementation of anti-homeless measures on properties, prevent further construction of these structures, and build a more inclusive space that is welcoming and friendly.

There are many more ways people can work to bring awareness to this issue; it can be as simple as having conversations with your local township council members or even sending emails to your state representatives to begin the conversation. For further action, you can sign this petition or donate if you’re able.

As the youth of our world, we are the driving reformers of society: it’s up to us to change what we believe is wrong. You have the power to help the homeless community around you; even if it’s a small action, it can go a long way.