An Explanation of the Illinois Rent Crisis

Vincent Ni
and
May 31, 2020
in
Wealth Inequality
A rally to lift the ban on rent control in Chicago. (Photo/Book Club Chicago) 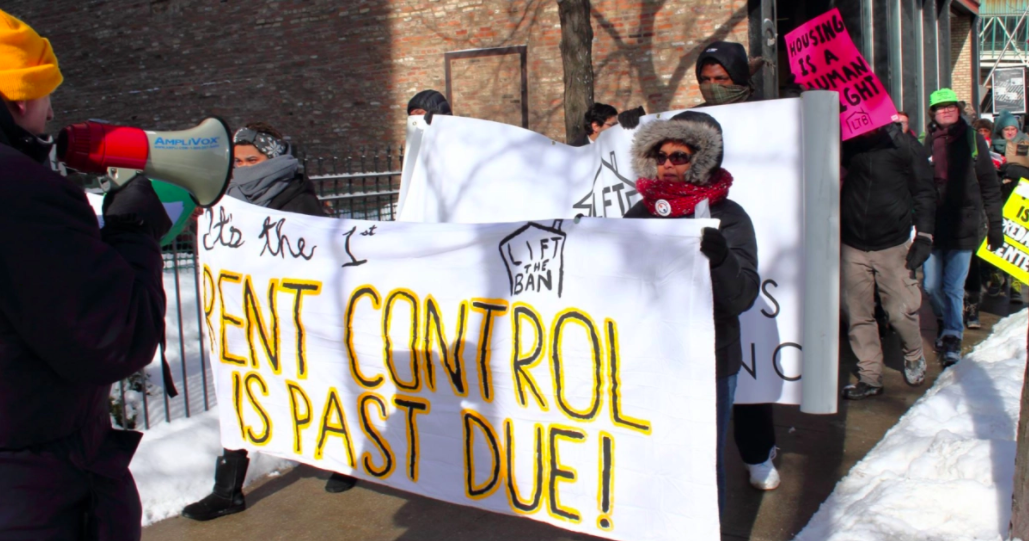 In recent months, the already concerning scarcity of affordable housing in the U.S. escalated into a true emergency. With the COVID-19 pandemic causing unprecedented unemployment rates, millions are scrambling to pay for housing and basic necessities. Federal and state governments are instituted relief programs, but Chicago aldermen and housing advocates are demanding better long-term solutions to the current crisis. In Illinois, for example, housing activists advocated for a “rent strike” against large apartment rental companies in Chicago’s Hyde Park neighborhood earlier this month.

On Tuesday, Governor J.B. Pritzker of Illinois announced that he would extend the ban on evictions in his state past Friday, the day when his most recent stay-at-home order is expected to expire.

Yet with the June rapidly approaching, Illinoians are likely going to miss their third monthly rent payment on Monday due to the COVID-19 outbreak. What’s certainly not helping is an all-time high unemployment rate of 16.4% that highlights the economic havoc this pandemic has wreaked.

Although thousands of the state’s residents placed their hope on the COVID-19 Emergency and Economic Recovery Renter and Homeowner Protection Act, a rent relief measure backed by progressive Democrats, the bill failed to advance in the Illinois House. The bill, as previously introduced by Chicago Democrat Rep. Delia Ramirez last Friday, prompted to cancel rent debt and suspend mortgage payments for those enduring plights related to the pandemic.

As Ramirez stated during a live-streamed press conference on Tuesday, “We have to make housing an absolute top priority during this special session in Springfield. If we want our families to be able to get through this pandemic, they have to have a roof over their heads and not have to decide if they’re going to purchase food — or pay rent.”

In detail, the proposed measures meant to cancel rent debt for tenants either physically or financially impacted by the virus, protect residents from being fined and reported for missing payments, and suspend mortgage payments for landlords and homeowners with a 180-day forbearance on taxes, insurance, and association fees. Under this plan, there will also be a residential housing relief fund that would compensate landlords and mortgage lenders. During a time when housing becomes an utmost priority, the bill planned to halt foreclosures and eviction filings.

To many’s dismay, this bill failed to come to fruition. As Ramirez said herself, “That was painful for all of us.”

Despite previously having placed a moratorium on evictions statewide since the imposition of the stay-at-home order in mid-March, Governor Pritzker must comply with the state ban on rent regulation under the 1997 Rent Control Preemption Act. This prevents local leaders from approving rent relief unless this bill is able to overturn the ban.

Even though Ramirez sought to reach a compromise with the bill’s opponents such as by reducing the moratorium on rent and mortgage payments to a 60-day span and dropped a halt on rent collection, she wasn’t able to convince her fellow lawmakers. Instead, she was able to increase a state relief fund for tenants and landlords by nearly 90%.

In the present predicament, landlords and tenants, who are unable to pay their respective mortgages and rents, can apply for a portion of the $396 million funds distributed by the Illinois Housing Development Authority. Eligible recipients of the aid have to earn less than 50% of the area’s median income and justify that they have indeed suffered economic hindrance due to this pandemic.

This is what Pritzker saw as an attempt to “find a middle ground here so that neither side is suffering the terrible effects of being evicted or not having any income at all.”

That said, this pandemic is such an enigmatic event that we’ve only begun to witness some of its ripple effects. Experts opposing rent cancellation are concerned with the shortage of state and local government taxes, which were meant to patronize schools, libraries, and other public infrastructures. No one is saying rent forgiveness is an easy choice to make. But at a time when unprivileged families have to make a decision of either paying for the bread or for the roof, politicians, not just from Illinois but from all of the US, have important decisions to make.