On December 19, 2018, in southern New Jersey, African-American high school athlete Andrew Johnson was forced to have his dreadlocks cut off before a wrestling match. 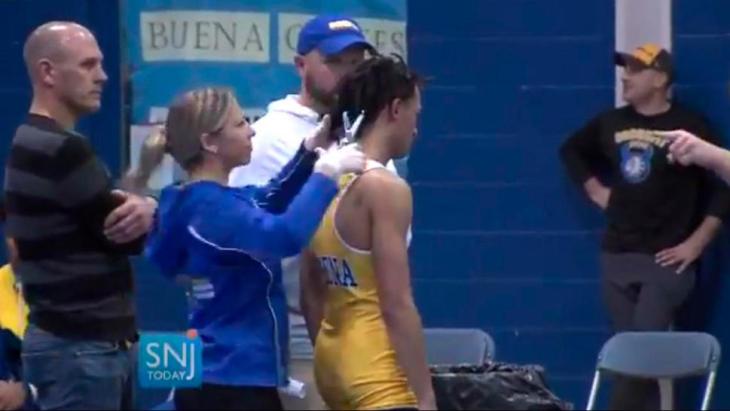 On December 19, 2018, in southern New Jersey, African-American high school athlete Andrew Johnson was forced to have his dreadlocks cut off before a wrestling match.

Johnson had his hair covered and had passed the pre-match screening. However, the referee was late and had missed the weigh-in. The rules specify that "if an individual has hair longer than allowed, it must be contained in a legal hair cover that is attached to the ear guards.” By wearing a legal head cover, Johnson was in accordance with these rules. However, the referee insisted that his hair violated the regulations.

The referee gave the student an ultimatum: he could either cut his hair or forfeit the match. The student painstakingly chose the latter, but it came at a great personal cost. Johnson won the match in overtime but appeared visibly (and understandably) upset.

Jordan Burroughs, a 2012 Olympic gold medalist and four-time world champion, drew attention to Johnson’s appearance at the end of the match: “He was hurting, and that wasn't fair.” Burroughs commended Johnson for his bravery and courage during the match given the incredibly adverse circumstances. He later tweeted, “My opinion is that this was a combination of an abuse of power, racism, and just plain negligence.”

After the match, enraged parents called for an emergency meeting with the school board members. During the public comments portion of the meeting, angered members of the community expressed their absolute disgust over what had occurred that evening. Every person in attendance was horrified and sickened by the utter humiliation Johnson had experienced.

Sadly, this isn’t the first time this particular referee has received criticism. According to the Courier Postnewspaper, in 2016, he used a hateful racial slur against another referee. He denied all allegations, claiming he didn’t remember saying it. After the incident was reported, he participated in an alcohol awareness program and sensitivity training. Later, the New Jersey Wrestling Officials Association ruled that it didn’t have the authority to fire him over what happened. At the time, Guy Siraki, the president of the organization, released the statement: “We’re going to move forward from here and hopefully this thing has been resolved in the back of a lot of people’s minds.”

In 2016, the referee's usage of a racial slur was quieted and forgotten. This time, we cannot let that happen. Mike Franel, an SNJ reporter, tweeted that Johnson was the “epitome of a team player” by allowing the trainer to cut his hair. This severely misportrayed what actually occurred. This wasn’t simply a story about overcoming adversity and challenge; instead, it was one about a person of color succeeding in the face of prejudice and discrimination. It’s a reflection of the intolerance and the acceptance of intolerance that still enshrouds our society today. The New Jersey chapter of the American Civil Liberties Union said in a tweet, “No-loc bans are designed to oppress and shame Black people not just for expressing Blackness, but for their Blackness.” By forcing Johnson to cut his dreadlocks, the referee oppressed the manner in which he chose to express his cultural identity. This is nothing less than an attack on culture.