Amazon is evidently not willing to cede its overwhelming power over its workers, demonstrated by its active opposition to the unionization efforts

Zephyr Alkali
and
May 10, 2021
in
Activism
Courtesy of Twitter 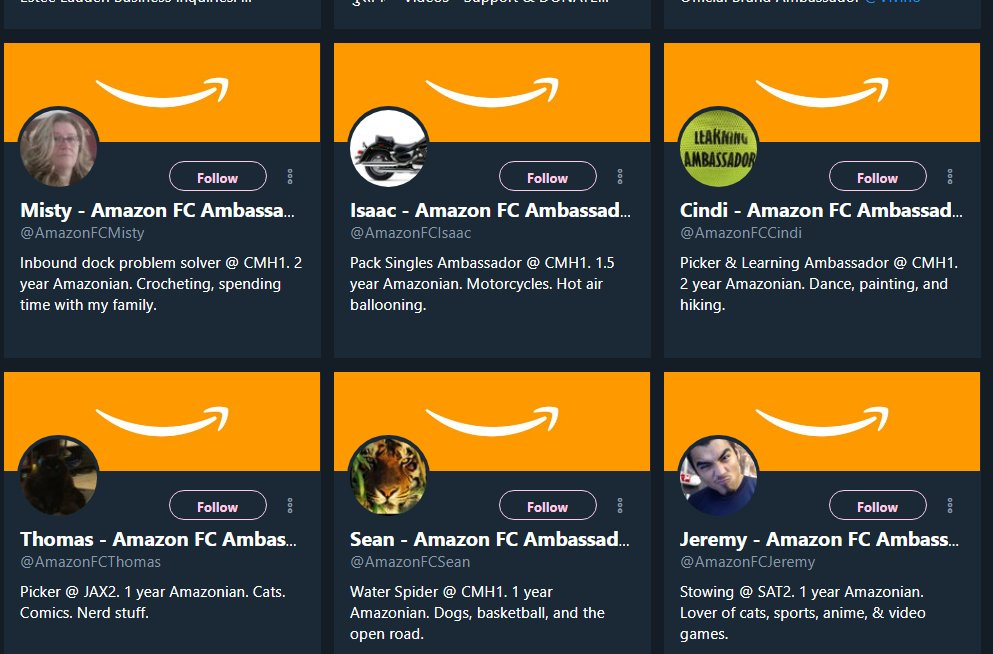 If you have been on Twitter over the past few months, you may have seen how recently, accounts have been emerging that seem to look quite similar. An orange background with the Amazon logo right in the center, the name of the account, a generic sounding name followed by "Amazon FC Ambassador", and to top it all off, a formulaic bio. Even on the surface, these accounts don’t feel real—and that’s before one takes a look at the tweets in the “likes” section of the profiles.

It just so happens that all of the tweets in the “likes” section come from verified Amazon accounts. It makes any person with even a sliver of sanity left after this past year and a half ponder how a worker, even if they loved their job more than anything in the world, could only interact with tweets from the company they work at. For obvious reasons, these interactions don't feel as though they're of human beings. But in all fairness, Amazon workers are barely allowed to relieve themselves as human beings naturally do.

Ever since the push for the unionization of a single Amazon warehouse in the United States began, the company has made their position on unions clear. As America’s second-largest employer continues to expand at a rapid pace, the practices at Amazon’s warehouses have begun to come under intense scrutiny, from journalists to government officials to labor advocates. Reports of inhumane working conditions, injuries, brutal quotas, and the well-emphasized occurrence of workers being practically forced to urinate in water bottles due to strict time constraints have justifiably brought the retailer under much pressure to reform its labor practices and work environments.

Amazon is evidently not willing to cede its overwhelming power over its workers, demonstrated by its active opposition to the unionization efforts. In response to the worker-led efforts to unionize a warehouse in Bessemer, Alabama supported by labor activists, prominent political figures, and workers throughout the country within and beyond Amazon, the corporation has launched its own anti-union pushback. Its counteroffensive has a three-pronged approach: a wave of anti-union propaganda both in online advertisements and in the warehouses themselves, a climate of intimidation and pressure around Amazon workers supporting the efforts, and its media presence, particularly on Twitter.

The use of a “Twitter army” is likely the most externally-visible measure that the company has taken against the push for unionization. This “Twitter army” does not only comprise of the main Amazon media account and the company’s Amazon News Twitter profile (and frankly, the idea of an e-commerce giant even having its own social media “news” account  seems quite sinister). It is also countless bot-esque accounts of fake Amazon warehouse workers sharing their completely real ‘experiences’ of being overjoyed to work at the company. These fabricated experiences contradict the growing investigative journalism and reporting of Amazon’s working conditions and labor practices, as well as the testimonies of Amazon workers themselves. One such example of these seemingly authentic Twitter accounts was an account that went by the name of “Burt at OK4”, before it was taken down in a ban wave by Twitter against fake accounts. The profile picture of the account was directly taken from a photo of the YouTube stars Dude Perfect. Such an obvious example of hoodwinking by the company could be easily revealed through a simple reverse Google search on the image.

The struggle between a paradigm of ever-expanding corporate power and vulnerable warehouse laborers working under grueling conditions and a climate of fear and coercion is not exclusive to Amazon. Many more people across the United States and the world are experiencing similar situations in their own jobs, in part due to circumstances caused by the global pandemic. Anti-union companies like Amazon are so desperate to win because they fear the kind of precedent that working people being able to take back some control will establish.

And the fact that Amazon’s trying so hard to quell this unrest speaks for itself.

The Dark Side of Self-Optimization