A new law passed by the Alabama State Senate stated that transgender youth in Alabama could henceforth not be treated with any form of hormone therapy, including puberty blockers, nor can they undergo surgery

Aindree Chatterjee
and
April 27, 2021
in
LGTBQ+
Courtesy of The Advocate 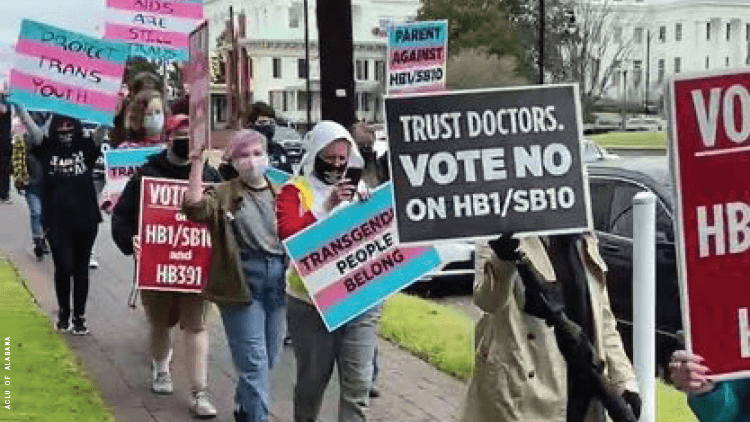 A new law passed by the Alabama State Senate stated that transgender youth in Alabama could henceforth not be treated with any form of hormone therapy, including puberty blockers, nor can they undergo surgery. The State Senate proceeded to formally vote to make treatment of transgender children a legal felony on March 2 of this year.

The motion was passed by attaining a 75% majority vote at the Senate meeting. Senator Shay Shelnutt, the initiator of the Vulnerable Child Compassion and Protection Act, primarily took up the bill after discussing gender dysphoria at the meeting.

The bill passed by the Alabama Senate proposes to make prescription of gender-affirming medications or surgery to minors a punishable offense. If charged, one can be imprisoned for 10 years or be forced to pay a $15,000 fine. The bill requested teachers and employees at educational institutions in Alabama to tell parents that "a minor's perception that his or her gender is inconsistent with his or her sex." This essentially doesn't let young adults judge and check if the situation and mindset at home are suitable for a transgender child. Alabama is the first state in the United States to pass this particular anti-LGBTQ+ bill.

Senator Shelnutt has said that the bill aims to make life safer for children by protecting them from unnecessary drugs and surgery. Guardians, members and allies of the LGBTQ+ community, and medical science professionals have spoken against the bills describing how dangerous it is. Most supporters and members of LGBTQ+ groups believe that lawmakers are unaware of how complicated the procedure of getting "gender-affirming care" is at the moment. The bill's action has been the polar opposite of what is expected for standards of treatment for transgender youth. Unfortunately, however, the whole bill was sponsored by someone who has stated that he has never interacted with a transgender person and was unaware of the treatment system until recently.

The Alabama ACLU, along with other prominent organizations like AIDS Alabama, have organized virtual protests to express their dissent. Lawmakers have spoken out in favor of the new act in Alabama, saying that gender dysphoria is just a phase for most children and have gone so far as to state that they often are not mature enough to judge what is best for their development. However, most professionals have said that the bill is harming the safe space for young transgender people alarmingly as they are nearly being barred from approaching doctors and teachers for advice or reassurance. The Alabama legislature is also contemplating the execution of House Bill 391, which aims to prohibit transgender people from playing on the school athletic teams aligning with their gender identity.

Previously, the House at Oklahoma had proposed a bill to lift the ban on conversion therapy for transgender youth below 18. Christy Mallory, who is serving as the legal director of UCLA Law's Williams Institute, also claimed that this law can negatively affect the current living conditions for trans youth. "Even just the campaigns around the bills can be really stigmatizing and hurt kids, even if the bills don't ultimately pass," she said, highlighting the possible psychological effect of the law.

Lawmakers' decisions to propose discriminatory laws in various states of the United States have alarmed minority social and cultural groups and those of the LGBTQ+ community. One of these was North Carolina's infamous "Bathroom Bill" of 2016 that barred transgender people from using the bathrooms of the gender identity they conform to. Despite the bill's annulment due to backlash from protesters, it was followed by many other transphobic bills in other states. Statistics have exhibited that nearly fourteen states in the United States have passed anti- LGBTQ+ laws in 2021, including the following states: Alabama, Iowa, Missouri, Kentucky, Texas, Utah, Mississippi, Virginia, Tennessee, North Dakota, South Carolina, Montana, Indiana, and New Hampshire.

The matter at stake right now is the safety and psychological well-being of transgender youth globally. These bills have a detrimental effect on the mental health of adolescents worldwide. With the current unstable conditions, psychological well-being is essential for everyone. Hence, lawmakers need to work to ensure a more equal and diverse environment rather than oppressing the voices of the transgender community.

With the fate of thousands at stake, if the House passes the Alabama Bill, we must all come together to express our voices of dissent.