Lorena forever redefined what it meant to be an activist and a compassionate human being for future generations to come. This is her story.

Michelle Seucan
May 26, 2020
in
COVID-19
Lorena Borjas in the middle of the party scene in Jackson Heights, Queens in 2011. (Photo/Daily News) 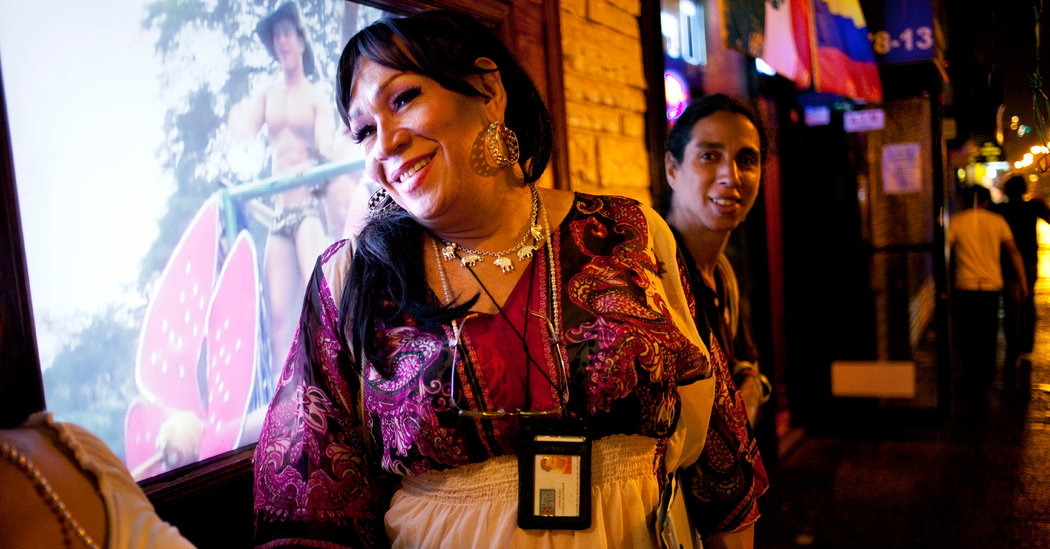 If you say the name Lorena Borjas in Jackson Heights, chances are you’ll draw some attention. Lorena Borjas was a transgender Mexican activist who dedicated almost thirty years of her life to protecting and providing resources for the transgender community in Queens. She was someone whose efforts as an ally and advocate were greatly admired and was often viewed as a sacred guardian angel and the mother of the trans-Latinx community. When she died of the COVID-19 illness on March 30th (at 59), the little community that she created in New York City had instantly felt the pain of her loss. Lorena Borjas’ story was beautiful—she inspired young transgender souls from every walk of life to embrace their identity and pursue their dreams. Lorena forever redefined what it meant to be an activist and a compassionate human being for future generations to come. This is her story.

“At this point, for me to deny my life would be crazy, really. Because my life is open to the public. Who doesn’t know about the life of Ms. Borjas?” - Lorena Borjas, 2014 Interview

In 1981, 20-year-old Lorena Borjas immigrated from her hometown in Veracruz, Mexico to the United States in pursuit of medical care that would help her transition. She was never able to explore her true self back home (she had no support at all from her family), but while living in Queens, Lorena felt a more tangible connection to the community of transgender women of color. This newfound sisterhood was a vibrant contrast to what she was used to in Mexico. However, life in New York City was just as troubling as it was exciting. Due to her undocumented status at the time, she was not eligible for most jobs, forcing her to resort to prostitution.

As a sex worker, Lorena began to uncover all the hidden aspects of the American social justice system; every single corrupt activity slowly came to light as she witnessed police brutality against transgender people and experienced perpetuated discrimination for simply existing. In an interview she had with activist Stephen Ira back in 2012, Lorena recalled the illegal police arrests of many transgender sex workers and the trauma of seeing NYPD officers beat up a transgender woman in Jackson Heights. She also told Voices of NY (2018), “We were women without families and who had run away from our countries, persecuted for expressing our identity, for being ourselves. Here in New York, we did not have the life and freedom we had been dreaming about. We also endured violence and abuse here. In those days, it was a real crime to be a transgender immigrant of color.” Noticing early on how the police system aided the evolution of toxic subordinate culture, Lorena knew that mainly marginalized groups were suffering from this subservience. And with that realization, Lorena made it her life’s mission to eliminate the normalized familiarity that transgender people have with fear and the unknown—but not without facing a few bumps in the road.

“Being transgender is hard in New York. When you go out on the street, you don’t know whether you will return or not.” - Lorena Borjas, 2014 Interview

The year 1990 was both the best and worst year of Lorena Borjas’ life.

After almost a decade of settling in Queens, Borjas finally was able to obtain legal residency as a permanent citizen. However, that very year, she was also arrested for prostitution and human trafficking charges, the latter of which was proved terribly false (she herself was a victim of trafficking, not a perpetrator, as recognized by the Queens Criminal Court’s Judge Serita only twenty-seven years later). These convictions stalled Borjas’s life for quite some time, preventing her from the renewal of permanent residency. Nonetheless, she continued blazing forward.

By 1995, Lorena decided to officially work as a full-time activist, committing every day to serving her transgender sisters. Her leadership and direction were fundamental in transforming the radical infrastructure of queer society, helping build multiple systems of survival for the oppressed. She single-handedly organized rallies and trans marches protesting unjust police policies, while also spending her nights at various clubs doing outreach for transgender health clinics. Lorena dedicated large portions of her free time to setting up immigration appointments for trans Latina women, along with facilitating sessions to arrange legal name changes. “Girls who never even thought it was possible to change their names have now changed their names. It’s a dream come true,” she noted in an interview with Stephen Ira for the Sylvia Rivera Law Project. She was also very conscious of how to properly conduct these kinds of consultations, even leading sensitivity trainings for general practitioners to prevent social humiliation. “They needed a place where the girls would not be humiliated,” Lorena said to Ira. “They’d (the practitioners) scream your name, your legal name, in front of everyone there!” In addition to these efforts, Lorena also worked relentlessly at the Community Health Care Network, ensuring that transgender women would have access to effective medical treatments. She then extended her influence to a program called “The Help” at the Latin Commission On AIDS, where she initiated syringe-exchange hormone therapy and organized HIV testing for transgender people.

In 2010, Lorena started to envision what it would be like to create her own formal organization, a personal project that would be dubbed the “Lorena Borjas Community Fund” (LBCF). The initial purpose of this foundation was to help transgender inmates living with HIV/AIDS, but living without any resources. The LBCF also bailed out trans sex workers who couldn’t afford the bail for prostitution charges, thus ensuring them freedom from criminal detention centers as they fought their cases. On top of that, Lorena would tirelessly orchestrate court support for LGBTQ+ immigrants at risk for deportation, assisting them in obtaining a legal immigrant status. This establishment sought justice for those facing wrongful criminal proceedings, giving them a platform of legal navigation. The LBCF helped thousands of people who were living on the margins of survival, and Lorena gladly coordinated these services without pay.

“To see them have a work permit and be happy is the goal. Along with a complete transition and access to proper health care.” - Lorena Borjas, “The Story of Lorena Borjas”

<blockquote class="twitter-tweet"><p lang="en" dir="ltr">Lorena Borjas fought for the lives and dignity and power of trans women in Jackson Heights... undocumented people, Latinx folks, sex workers. This is who is dying. Rest in power, Lorena. Solidarity and compassion to all who love her. <a href="https://t.co/JuokCEPxe0">https://t.co/JuokCEPxe0</a></p>&mdash; Melissa Gira Grant (@melissagira) <a href="https://twitter.com/melissagira/status/1244602519298478082?ref_src=twsrc%5Etfw">March 30, 2020</a></blockquote><script async src="https://platform.twitter.com/widgets.js" charset="utf-8"></script>

Nothing made Lorena more happy than taking care of her community. She asserted that it was a higher calling, a powerful presence beckoning her to combat the systemic inequalities depriving transgender people of their human rights. This powerhouse of an activist was so determined to make a difference in any way possible that she even attracted the attention of NYC Council Member, Daniel Dromm.

Not only is Dromm a huge supporter of her pioneering impact, but he is also one of her long-time best friends. It was very important to him that he honor her community work at NYC Borough Hall for their annual LGBTQ+ event. Dromm also took it upon himself to introduce her to political leaders such as Queens district attorney Melinda Katz and even Governor Cuomo, who ended up pardoning her past convictions through authorized work done at the Transgender Law Center.

“Some transgender folk don’t even have the self-esteem to think that they’re worth fighting for their own rights, but Lorena gave them that dignity. She went out and said to them, ‘No! You’re valuable! You’re worth something! And we’re going to fight for our rights together.’ ”

Regardless of Lorena’s own personal problems - worrying about possible deportation, struggling to update documents, not having access to necessary health care - she was still providing resources and services for anyone who needed help. That never changed, even when she contracted COVID-19. As she was bedridden in Coney Island Hospital, Lorena still managed to create an emergency GoFundMe account for transgender people affected by the virus (you can contribute here). No matter the circumstance, Lorena Borjas always put others before her. Always.

“You could aspire to be like her, but you clearly know you won’t be like her because you are not as selfless as she is.” - Cecilia Gentili, CNN Interview

Lorena Borjas’ story may have ended with the virus, but her legacy continues to live on in the hearts of everyone she has touched. She was a trail-blazing icon, leaving behind a long line of empowered activists in her wake. Now that she is gone, we mustn't forget the change she’s instilled in society, her urgent sense of justice and soulful motherhood. Lorena has shifted the narrative from ignorance to political mobilization, challenging preconceptions of what is right and what is wrong. She pushed those in power, such as advocacy groups and government officials, to acknowledge systemic inequity and eliminate it. But most of all, she gave her fellow transgender sisters a voice. She gave them dignity, hope, something to fight for, and something to believe in. Lorena will always be remembered as a hero. In the words of Gentili for the New York Times, “Without her we are a motherless brood, but we will thrive nonetheless. In the end, she gave us the greatest gift of all - she taught us how to fend for ourselves.”

Communities Worldwide Unite to Spread Positivity During the Coronavirus Pandemic