Arpita Singh
and
September 12, 2021
in
Sports
Courtesy of the New York Times 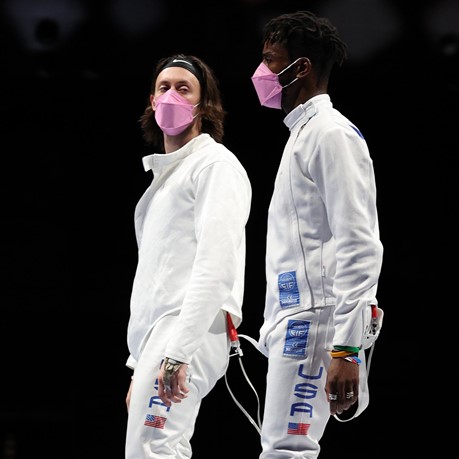 It’s safe to say that 2020 has been a rough year for everyone around the world, with the Tokyo 2020 Olympics continuing that pattern. But among the many athletes admitting to being sexually assaulted to others being accused of sexually related crimes, the U.S. fencing team showed that change is possible. Jake Hoyle, Curtis McDowald, and Yeisser Ramirez all wore pink masks in protest of their other teammate, Alen Hadzic, who wore a black mask.

Alen qualified for the 2020 Olympics in May, and soon after that, he was again accused of sexual impropriety. This time he was accused by three women of incidents that occurred from the years 2013 to 2015. However, Hadzic has denied all charges and claimed that he is innocent.

On June 2, Alen was suspended from all fencing activities by the U.S. Center of SafeSport. According to USEF, the U.S. Center for SafeSport is “an independent entity charged with providing education and outreach about athletic abuse and investigating and resolving reports of sexual misconduct.” In other words, this organization is responsible for the safety and education of athletes regarding abuse.

On June 29, Hadzic appealed the suspension and won back his Olympic eligibility. Despite this, he still had to follow a few restrictions in accordance with participation on the team. USA Fencing ruled that Hadzic will be required to travel to Tokyo separately from his teammates, and he was also not allowed to stay in the Olympic Village. According to Hadzic, these restrictions were “arbitrary and unnecessary”, so he filed a complaint with the United States Olympic and Paralympic Committee. Their ruling didn’t lift any of the restrictions, but it did allow him to move closer to the Olympic training center. According to one of his teammates, the team is frustrated that this is a thing they even have to deal with. He also claimed that Alen has been protected again and again against his predatory behavior.

Hadzic ended up playing with his team against Japan, but they lost the match and ended up in ninth place. During the match, everyone noticed that Hadzic was the only one wearing a black mask while the rest of the team was wearing pink masks. These pink masks worked as an effective way for the team to protest against Alen’s presence at the Olympics.

Despite this, Olympic fencer Jacqueline Dubrovich posted on Instagram that this was performance activism from the fencing team, in support of Alen’s victims. Another Olympic medalist, Ibtihaj Muhammad, posted on Twitter “Kudos to the team for taking a stand.”

The fencing team reminded viewers that everyone always has a choice despite their circumstances. The teammates decided that sometimes it is necessary to protect against your own. This act of activism was a meaningful gesture by the fencing team, but it points out that no significant action has been taken against Alen Hadzic. His teammates’ protest only showed that his presence was a reminder of the broken system in place; the system that people are supposed to trust is the same system that let a sexual predator play in the Olympics. Alen’s behaviour shows a clear pattern; his victims, and even his teammates, have continually stood up against him, yet no significant action has been taken. But, this isn’t the end, this is only the beginning, and there is much work left to be done to make sure that this world is safe for all targets of sexual assault, no matter their profession.

The Period Taboo Must End Now