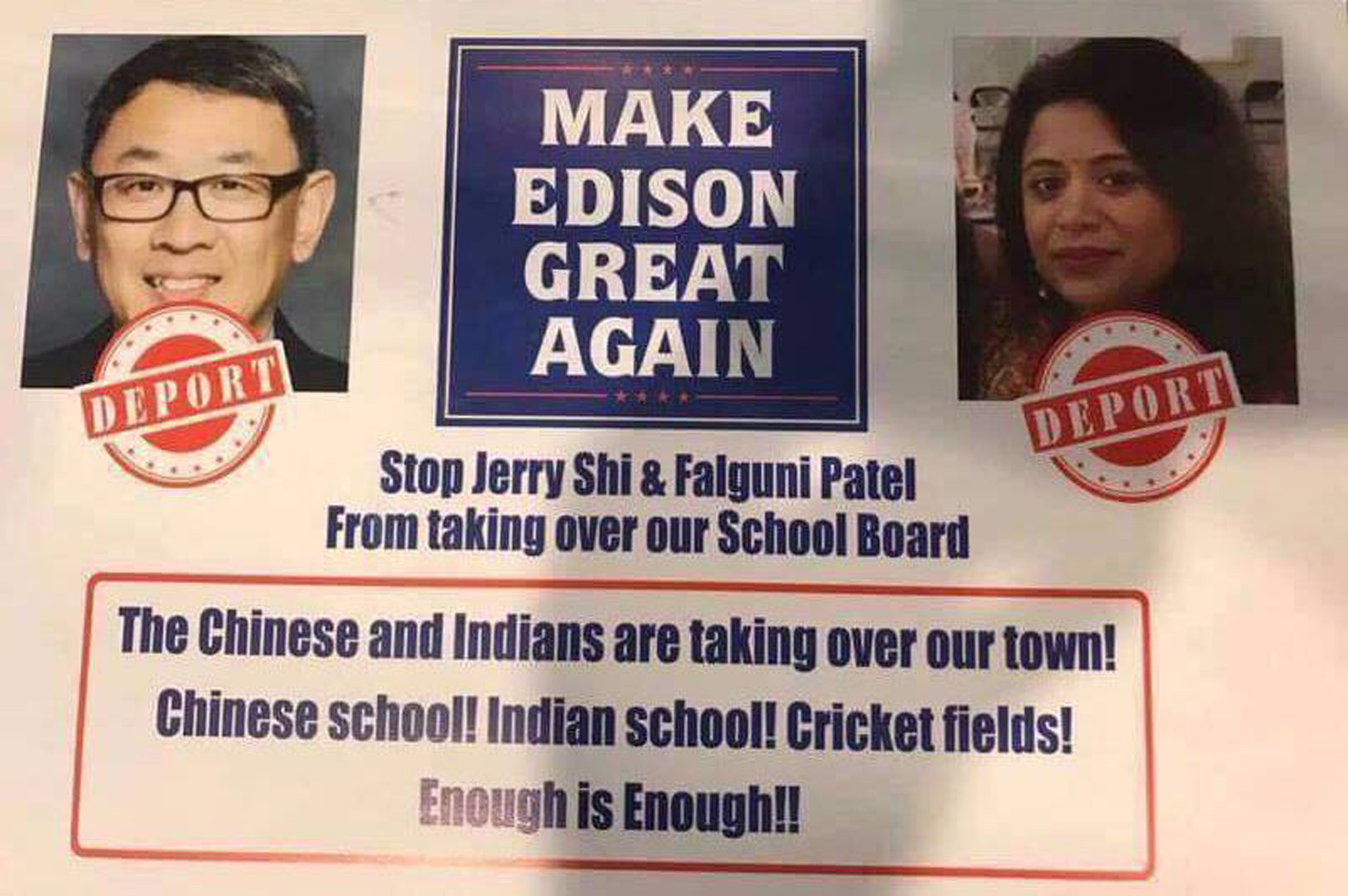 White supremacists have once again proved to be the epitome of evil by harassing innocents that have done nothing but be the race that they were born with.

Recently, two Asian Edison school board candidates were targeted in a wave of denouncing postcards sent to homes in Edison, New Jersey. I took one look at these disgusting flyers and I genuinely could not tell which part was worse. Was it the “Deport” label slapped on the pictures of the two candidates? Was it the tasteless “Make Edison Great Again” plastered on the front? Or was it the “The Chinese and Indians are taking over our town! Chinese school! Indian School! Cricket fields! Enough is Enough!!” scrawled on the bottom like a child throwing a tantrum?

The disrespect and hatred that radiate from these flyer absolutely baffles me. Where does one find so much fear or anger to waste time and money on this project? I speak directly to the person behind this act when I say: to be so blatantly racist by mailing these flyers to homes with children and Asian parents who have worked so hard to make a better life for their family is horrible and outrageous, but to do it anonymously? To hide behind it? Absolutely cowardly.

According to the U.S. Bureau, half the population in Edison is Asian, yet rather than combine great minds to improve the quality of education, someone has decided to polarize the two races.

It seems to me that more and more displays of racism have been trending ever since the current administration stepped into the role. Rather than condemn white supremacy, racism, and intolerance, leadership has stood by as certain citizens turn their racist thoughts into harmful action. It was obvious there was a problem when a former KKK leader, David Duke, announced to Donald Trump this past August, “I would recommend you take a good look in the mirror & remember it was White Americans who put you in the presidency, not radical leftists.” When the ex-leader of a hate group implies that the two of you are on the same side, a change has to be made.

If that change can’t come from higher up, it has to come from us. Messages of disapproval for this flyer came from friends and neighbors of the candidates. A small but determined community formed to show the candidates and other Asians in Edison that they were not by any means alone. This past Tuesday, November 7th, the two candidates earned a spot on the school board.

Because messages of hatred and intolerance spread like wildfire, we, as the generation rising to power, must counter them with awareness and acceptance. We must spread love and tolerance now so that, when our generation reaches adulthood, there is a smaller chance of anyone acting like a completely ignorant bigot and spreading racism through flyers. There is no room for more racism in this country. There is no excuse for standing idly while white supremacists rip apart people who are not similar to them. And there is absolutely no way that any of the millions of the kind, hard working, innocent minorities will be able to move forward in life with more racism and more hate and more ignorance plaguing the air we breathe.

Do the job so many are ignoring. Stand up. Fight. And don’t let anyone stand in the way of all the achievements you can accomplish.