Natalie Nielsen
and
January 13, 2020
in
LGTBQ+
Courtesy of BBC 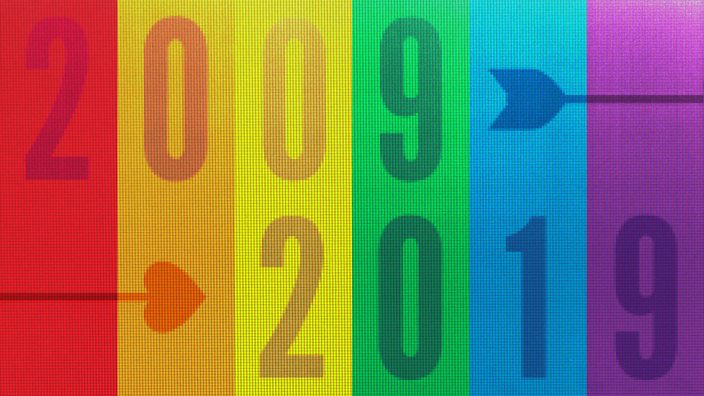 While people, movements, and societal opinions are fluid, not to be defined by time constraints, the turn of the decade offers us an important chance to reflect on the progress we have made in the last decade as a means for continuing that progress. By evaluating what works and what doesn’t, we are able to start the new decade with a renewed sense of activism and outreach.

The 2010s have been a landmark decade for LGBTQ+ visibility, greatly aided by the rise of social media and television. The exposure to a diverse group of people, including those who identify as LGBTQ+, through these platforms fosters more acceptance towards similar people when seen in real life. This acceptance can also be encouraged by the normalization and popularity of LGBTQ+ celebrities like Laverne Cox, Lil Nas X, and Caitlyn Jenner, and more recently, the rise of LGBTQ+ politicians, like Pete Buttigieg, Tammy Baldwin, and Sharice Davids. Although LGBTQ+ visibility is on the rise, this decade has seen many highs and lows for the movement’s political progress.

The decade began with slowly increasing support for marriage equality, which was a result of the defeat of California’s Proposition 8, which called for a ban on same-sex marriages and was ruled unconstitutional. In June of 2010, Barack Obama issued a memorandum ordering federal agencies to extend spousal benefits to same-sex couples under the Defense of Marriage Act, which had previously constricted marriage to the union of one man and one woman. That year ended with an official repeal of the Don’t Ask, Don’t Tell law, allowing people who identify as gay, lesbian, or bisexual to serve openly in the United States Armed Forces.

In April of 2011, the U.S. Department of Labor updated its discrimination policy to also bar discrimination on the basis of gender identity. In 2013, same-sex marriage was legalized in Maryland, Delaware, Rhode Island, and Minnesota. In 2014, North Carolina, Idaho, Arizona, and Wyoming joined the growing number of states allowing same-sex marriage. On June 26, 2015, a landmark Supreme Court decision, Obergefell v. Hodges, legalized same-sex marriage in all 50 states, ruling that depriving same-sex couples a marriage license violated their Fourteenth Amendment rights. This began a “Rainbow Wave” of same-sex partners getting married and revitalized LGBTQ+ activism. In October of 2016, a policy lifting the ban on transgender individuals from serving in the United States Armed Forces.

Despite all of the progress made, however, there have still been plenty of setbacks. In June 2016, almost one year after the legalization of same-sex marriages in all 50 states, there was a mass shooting at Pulse nightclub, a gay bar in Orlando, Florida. It was the deadliest event in the history of violence against LGBTQ+ people, killing 49 people and wounding 53 others. The attack was devastating to the LGBTQ+ community across the nation, but it allowed many to rally in support for those injured and awareness to prevent another incident like it from happening again.

The advancement of LGBTQ+ rights also took another major hit in 2017 after the inauguration of President Trump. The same day of his inauguration, all mentions of LGBTQ+ rights were removed from the White House website. Less than a month later, Trump removed guidelines allowing transgender students to utilize the restroom they feel most comfortable in. In July 2017, he removed the ability for transgender individuals to serve in the United States military, revoking Obama-era legislaton. A federal judge overruled his decision, until the Supreme Court banned all transgender individuals from enlisting in the military as of April 12, 2019.

Progressive political action protecting the rights of LGBTQ+ folk have been severely limited since the beginning of the Trump administration, but that does not mean that it has ceased. LGBTQ+ visibility is thriving in movies, television shows, social media, and famous figures, which is the first step for creating effective change. In 2019, LGBTQ+ people from around the nation celebrated how far the nation has come during the 50th anniversary of the Stonewall Riots. Despite current stalls in political action, people across the nation are organizing to encourage LGBTQ+ rights movements, support people, and increase voter turnout for the next election in November of this year.

The most important actions people can take to ensure continued progress in fighting for LGBTQ+ protections and rights is to go out and vote and encourage others to as well. Voting for candidates that believe in LGBTQ+ rights and protecting marriage equality is incredibly crucial to continuing the work of LGBTQ+ activists around the nation. As we move into the new decade, it is critical that we continue to uplift LGBTQ+ activists and voices from around the world and push for political progress.