Viya Manikandan
and
June 9, 2021
in
World
Courtesy of CNN 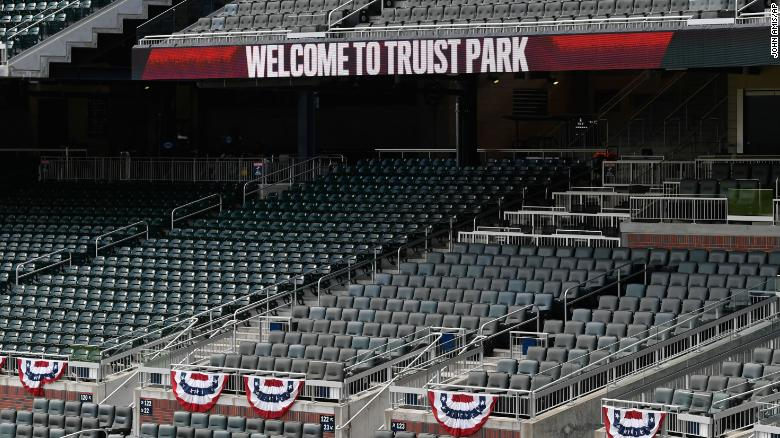 The MLB announced that it was going to pull the All-Star Game out of Atlanta following Georgia’s new voting law. This voting law makes it harder for Georgians to vote, particularly Black citizens. MLB’s announcement arrived just one week after Georgia Governor Brian Kemp signed this new measure into law. In a statement, MLB Commissioner Robert Manfred stated that the MLB supports voting rights for all Americans and opposes ballot box limits. In response to MLB's ruling, ex-president Donald Trump called for a boycott of the game.

Demonstrators throughout Myanmar carried painted Easter eggs with messages of resistance against the military takeover on Feb. 1 and the subsequent state-sponsored aggression against protesters in the new round of anti-coup protests. Despite security forces' violent response, the protest movement started in February and has shown no signs of slowing down.

Arkansas Governor Asa Hutchinson vetoed a bill on Monday that would have prohibited doctors from conducting gender-affirming operations on transgender people under the age of 18. The Arkansas Save Adolescents from Experimentation (SAFE) Act, which was passed by the legislature last month, Hutchinson said, "would be and is a massive government overreach" and "a symptom of America's cultural war."‍

On Thursday, President Biden announced several executive actions he made to address the gun violence “epidemic” in our nation. In the unveiling, he promised to take “common-sense” steps to put an end to gun violence. Biden’s plan calls for restricting “ghost-guns” made with parts and instructions that are available online. Adding on to that, he called on Congress to take larger steps, including banning assault weapons and increasing the needs for background checks.

Dr. Andrew Baker, the medical examiner who conducted George Floyd's autopsy, testified in former Minneapolis police officer Derek Chauvin's murder trial on Friday, telling jurors that restraint of Floyd's body and pressure on his neck were the primary causes of Floyd's death. According to Chauvin's defense attorneys, Floyd's underlying health problems and drug use were to blame for his death when Chauvin was arresting him in May 2020. Floyd's heart disease and opioid use were "contributing factors," according to Baker, but compression of his neck was the primary cause of death. If circumstances are unknown, medical examiners are required to classify the manner of death as "undetermined," but Baker classified Floyd's death as "homicide."

Lt. Caron Nazario of the United States Army is suing two Virginia cops for infringing on his rights. During a traffic stop, police allegedly pointed weapons at Nazario, pepper sprayed him, and pulled him to the ground, according to a federal civil complaint filed last week. Nazario recorded the incident on his phone, and both officers' body cameras captured video as well. Officers suspected Nazario, who was in uniform at the time of the arrest, was driving his new SUV without a license plate (the lawsuit says he had temporary cardboard plates taped to the inside of his rear window). Nazario admits he didn't pull over right away, opting instead to slow down and pull into a well-lit gas station for safety reasons.

Hundreds of people protested in Brooklyn Center, Minnesota on Sunday night after a Black man was fatally shot by police during a traffic stop, escalating tensions during former Minneapolis officer Derek Chauvin's murder trial for George Floyd's death. Daunte Wright, the 20-year-old driver, was identified. People chanted Wright's name outside the Brooklyn Center Police Department headquarters, and some decorated the building's sign with graffiti. Officers in riot gear shot a chemical irritant and rubber bullets into the crowd, hitting at least two people and leaving one bleeding from the head. The National Guard was also deployed.

On Tuesday, injections of Johnson & Johnson's coronavirus vaccine came to a halt around the country after federal health officials investigated a rare blood-clotting disorder that occurred in six people who received it. The six were all women who were between the ages of 18 and 48, and they all became ill within one to three weeks of receiving the vaccine. One woman died in Virginia, and another was in critical condition in Nebraska.

‍14th - Biden announces withdrawal of all troops from Afghanistan by Sept. 1

The Washington Post announced that President Biden would withdraw the last American troops from Afghanistan by or before September 11, the 20th anniversary of the terrorist attacks that sparked America's longest war. Biden is expected to announce on Wednesday that he will extend the deployment of thousands of troops in Afghanistan beyond the May 1 deadline set in last year's talks between the Trump administration and the Taliban, who have threatened to retaliate against US and NATO troops if the troops remain in the area any longer. According to one official, establishing a "simple plan to leave" is important to prevent a new war after the deadline has passed.

Former police officer Kim Potter was arrested on Wednesday and charged with second-degree manslaughter for fatally shooting Daunte Wright, a 20-year-old Black man, during a traffic stop in Minnesota. Potter was released on a $100,000 bond after resigning from the Brooklyn Center Police Department on Tuesday. The crime carries a maximum penalty of ten years in prison. Potter's lawyer did not respond to requests for comment right away. Potter inadvertently shot Wright with her gun when she intended to use her Taser, according to the city's police chief, who also resigned. Protests have erupted in response to the shooting. A 27-year police veteran like Potter, according to Ben Crump, who is representing Wright's family, knows the difference between a gun and a Taser. He said, "This was not an accident."

‍16th - Indianapolis shooting at a Fed-Ex which killed 8 people

Late Thursday, a gunman opened fire at a FedEx facility on the grounds of the Indianapolis International Airport, killing eight people. Four more people were taken to hospitals with gunshot wounds, one of whom was in serious condition. "This is a disaster," Genae Cook, a spokeswoman for the Indianapolis Metropolitan Police Department, said early Friday. The alleged assailant was discovered dead nearby, apparently by suicide.

Jon Schaffer, a founding member of the far-right Oath Keepers, pleaded guilty on Friday to charges arising from his involvement in the Capitol riot on Jan. 6. According to Politico, he is the first suspect in the Capitol riots to plead guilty, and as part of the bargain, he will "cooperate entirely with the United States." Schaffer pleaded guilty to obstructing a congressional official proceeding and entering and staying in a restricted building with a firearm. Schaffer acknowledged that he was "among the first individuals to push past" a group of broken Capitol doors.

‍19th - Half of U.S. adults have received a dose of COVID-19 vaccine

According to the Centers for Disease Control and Prevention, 50.4% of the adult population in the United States has received at least one dose of coronavirus vaccine. The new landmark in the federal government's vaccination program now involves a concerted effort to persuade vaccine-skeptical people to get vaccinated.